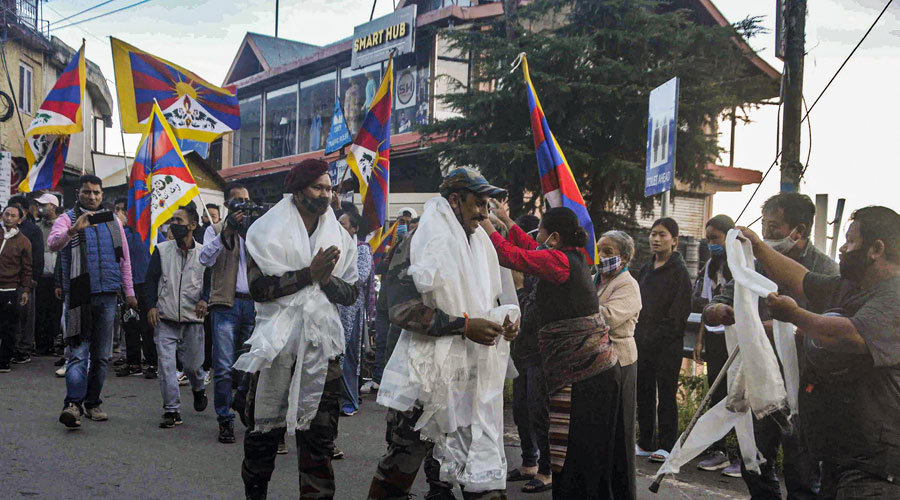 People belonging to the Tibetan community greet Indian Army soldiers on their arrival at Panthaghati Chowk en route to the LAC amid India-China border tension in Shimla.
PTI
Umanand Jaiswal   |   Guwahati   |   Published 06.09.20, 02:56 AM

The Arunachal Pradesh government has begun an investigation into the allegation that Chinese soldiers have “kidnapped” five villagers who might have gone near the disputed border on a hunting expedition.

The state government has dispatched a police team to the remote area in Upper Subansiri district after media reports on Saturday about the alleged kidnapping on the Sera 7 border route, which is patrolled by both Indian and Chinese troops.

The Line of Actual Control (LAC) with China is a 10 to 12 days’ trek from the Nacho subdivision under which the village, which the administration is trying to identify, is located. Army sources, however, said people sometimes lose their way on the mountainous and forest terrain while on hunting trips.

The media reports have claimed that the villagers could have bumped into Chinese People’s Liberation Army soldiers. China claims Arunachal Pradesh to be a part of South Tibet.

The alleged kidnappings have come at a time when tension is rife along the India-China border in eastern Ladakh. However, army sources said the “situation is normal” along the LAC in Arunachal Pradesh.

State BJP president Tapir Gao and senior Congress MLA Ninong Ering have tweeted about the “reported kidnappings”, urging the Centre to take a tough stand against such activities by the PLA in the frontier state.