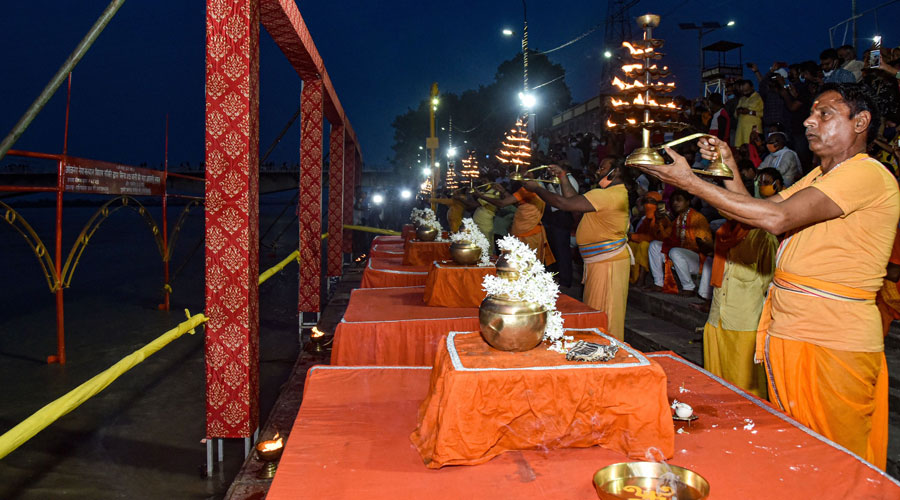 The chief priest of the makeshift Ram temple on Sunday became the first person barred, because of the Covid-19 protocol, from the August 5 ceremony in Ayodhya that Prime Minister Narendra Modi is expected to attend.

Later in the day, a haze was raised over what the Prime Minister’s precise role would be at the event — apparently a fallout of a turf war among the organisers.

Police stopped Acharya Satyendra Das, 88, from going to the temple in the morning citing the pandemic protocol, asked him to go into home quarantine, and told him he had been barred from the August 5 programme.

Satyendra’s son and disciple Pradeep Das had tested positive for the coronavirus on Thursday although the chief priest’s report was negative.

Satyendra is likely to be the third high-profile absence from the event — temple movement spearheads L.K. Advani and Murli Manohar Joshi have yet not been invited.

An assistant to temple trust chief Nritya Gopal Das told reporters that Modi would lay the foundation stone for the temple but not perform the bhoomi pujan (site worship) on August 5 — a claim a state government official dismissed.

No official statement has so far come from the government or party confirming the Prime Minister’s participation or role at the ceremony.

“While I was walking towards the temple this morning, police officers stopped me and said I was not allowed to go there. They also informed me of the state government decision (to bar him from the August 5 event),” he told reporters just outside his ashram, which he has been asked not to leave.

He said the three other priests of the temple (apart from Pradeep) — who had all tested negative — had also been asked to stay in home quarantine.

“Fourteen security personnel at the complex have tested positive but no other security guard has been sent into quarantine,” Satyendra said.

“I had been a priest at the temple for more than 30 years before a local court appointed me its chief priest in 1992 after the Babri Masjid was demolished. I never dreamt in my life that I would be kept away from Lord Ram.”

He took a veiled dig at chief minister Adityanath: “If the government is so serious about following the virus protocol, those whom Pradeep had helped perform puja in the last few days should also be put in quarantine.”

Pradeep had assisted Adityanath in a puja at the temple on July 25.

It was Satyendra’s guru, Mahant Abhiram Das, who is said to have placed the Ram idol inside the Babri Masjid complex on December 23, 1949. 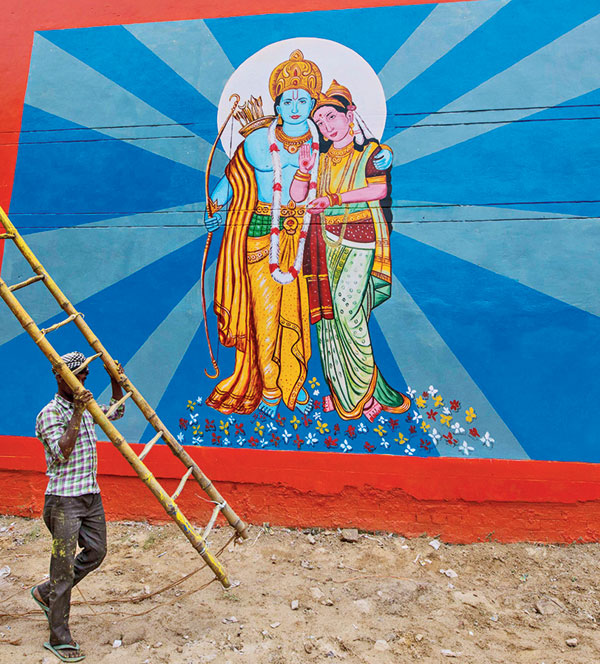 A worker on Sunday paints a street wall in Ayodhya as part of preparations for the August 5 ceremony at Ram temple.
AP
Pujan mist

Kamal Nayan Das, an aide to Nritya Gopal Das, chairman of the Shree Ram Janmabhoomi Teerth Kshetra Trust that is organising the August 5 ceremony, told reporters that Modi would not be the yajman (host) at the event or perform the bhoomi pujan.

“He will only lay the foundation stone,” Kamal Nayan said. He claimed the bhoomi pujan had been going on at the site for the past three months, with the priests themselves donning the role of yajman.

A state home department official insisted that Modi would perform the bhoomi pujan. “Kamal Nayan is saying all this because his guru, Nritya Gopal, has been sidelined, with RSS and central government officials deciding everything,” he said.

Adityanath cancelled his scheduled Ayodhya visit to oversee the arrangements on Sunday. No explanation was given.