The current situation forced government hospitals in the union territory to reschedule elective surgeries, besides adversely affecting residential, industrial and commercial areas in the city 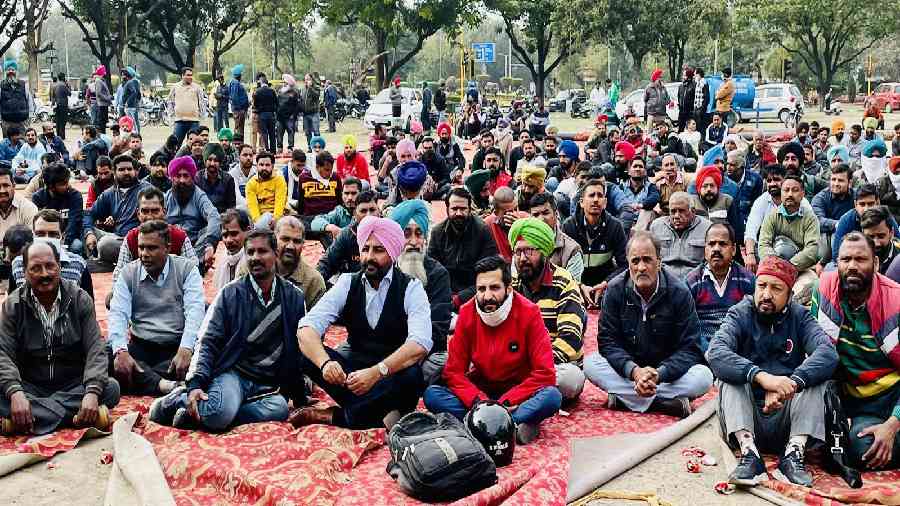 The Chandigarh administration on Tuesday evening invoked the Essential Services Maintenance Act, banning strikes by the electricity department for six months after a protest by its employees plunged parts of the city into darkness.

Residents of some parts of Chandigarh continued to face power outages on Wednesday morning with electricity supply remaining disrupted.

Harried residents of Chandigarh, which is the country's first planned city, blamed the city administration for remaining a mute spectator, leaving them in lurch as the power outages crippled the city.

Congress MP from Anandpur Sahib Manish Tewari sought intervention of Union Home Minister Amit Shah in the matter, saying there is chaos and anarchy and all essential services have come to a standstill.

"Dear @AmitShah ji Chandigarh has been without electricity for 36 hours. There is chaos & anarchy. All Essential Services are at a standstill. @ChandigarhAdmn has miserably failed to address the situation. Chandigarh is an Union Territory. Kindly intervene," said Tewari in a tweet on Wednesday.

Many areas in Chandigarh faced power outages since Monday night after employees of the electricity department launched a three-day strike to protest a privatisation move.

Thousands of homes have been without power and water supply and traffic lights are not working in many areas in one of India's most well-planned cities, reports NDTV.

The outage forced government hospitals in the union territory to reschedule elective surgeries, besides adversely affecting residential, industrial and commercial areas in the city.

"We have a backup plan like we have generators. But you cannot put 100 per cent load of a hospital on a generator. So, we had to reschedule or postpone our planned surgeries," Chandigarh Health Services Director Suman Singh told news agency PTI.

The power cut has also shut down online classes and coaching institutes in the Union Territory located around four hours from Delhi.

The electricity workers are protesting against the privatisation of the electricity department. Union Territory Advisor Dharam Pal held a meeting with the powermen's union to persuade them to call off the strike, but there is no resolution so far.

The protesting employees fear privatisation will change their work terms and also drive up power tariffs.

The Punjab and Haryana High court took suo motu notice of the "electricity crisis", and asked the union territory chief engineer to appear before it on Wednesday.

"Whereas the Administrator, UT Chandigarh is further satisfied that the prohibition of strike by the employees of the said department is in public interest and it is necessary to prohibit a strike," according to an order passed by Dharam Pal, Adviser to the UT Administrator.

Though officials of the Chandigarh administration claimed necessary arrangements were being made to maintain continuity of power supply, residents and traders in many areas of the city complained of outages.

Power disruption has also hit industrial production and manufacturing at some units in the city.

"Shopkeepers and traders are feeling harassed over the disruption of electricity supply in the city. Electricity is an essential service and the administration should take appropriate steps to restore it," said Chandigarh Beopar Mandal president Charanjiv Singh.

Online classes of some students were also affected in many areas in the city. Some coaching institutes even suspended classes for the day because of power outages.

Honey, a student of Class 11, said, "I could not take my economics subject test today as the coaching centre suspended classes because of power shutdown."

Aditya, a Class 12 student preparing for his board exams, said, "I could not take my online classes today because there is no electricity since the morning, and the power backup at my house has gotten discharged. This kind of situation at a critical juncture has adversely affected several students like me."

Traffic lights at some intersections in the city were also non-functional because of the outage.

A division bench of justices Ajay Tewari and Pankaj Jain of the high court directed the chief engineer to apprise the court of the measures being taken to alleviate the power crisis in Chandigarh.

"It has been brought to our notice that power supply to large parts of the city of Chandigarh has been disrupted. In the circumstances, we are constrained to take up this matter on the judicial side and have consequently requested the learned senior standing counsel, UT, Chandigarh to apprise us of the arrangements which the administration is making to ensure that undue hardship is not caused to the residents of the city," it said in an order.

Senior standing counsel, Chandigarh, Anil Mehta apprised the bench that "the power failure is on account of acts of sabotage by the striking employees".

He submitted that a request was made by the UT administration to get officials from the states of Punjab and Haryana to tide over this crisis.

"The latest information that he received is that Punjab has expressed its inability to send any person on deputation. He is not yet aware of the response of the state of Haryana," the order said.

The bench further observed, "This court cannot be oblivious of the fact that disruption of electricity supply is not only affecting the ordinary residents but may affect institutions like hospitals where patients may be on ventilators and other life support systems."

"Apart from that there are online examinations and classes which students are taking. In many cases, virtual hearing has been disrupted in this court also because lawyers are not able to appear due to the fact that there is no electricity in their offices. In such situations, the disruption of electricity supply can cause irrevocable damage," it added.

Employees of the electricity department, under the banner of the UT Powermen Union, went on a strike on Monday night.

President of the union Dhian Singh said they are protesting against the UT Chandigarh administration's decision to privatise the electricity department.

The protesting employees claimed that if the electricity department was privatised, their service conditions would change and it also could lead to a rise in power tariffs. They also held a massive protest here.

"We have a backup plan like we have generators. But you cannot put 100 per cent load of a hospital on a generator. So, we had to reschedule or postpone our planned surgeries," she said, adding electricity supply to hospitals should not be disrupted at all during any protest.

Meanwhile, the Post Graduate Institute of Medical Education and Research (PGIMER) on Tuesday said it is coordinating with the UT administration to ensure uninterrupted power supply.

The situation is being viewed seriously and a SE (Superintendent Engineer) has been deputed at the 66 kV substation here. For the critical areas, we have a backup of DG sets. We are microscopically monitoring to ensure that no hospital service is impacted, the PGIMER said in a statement.