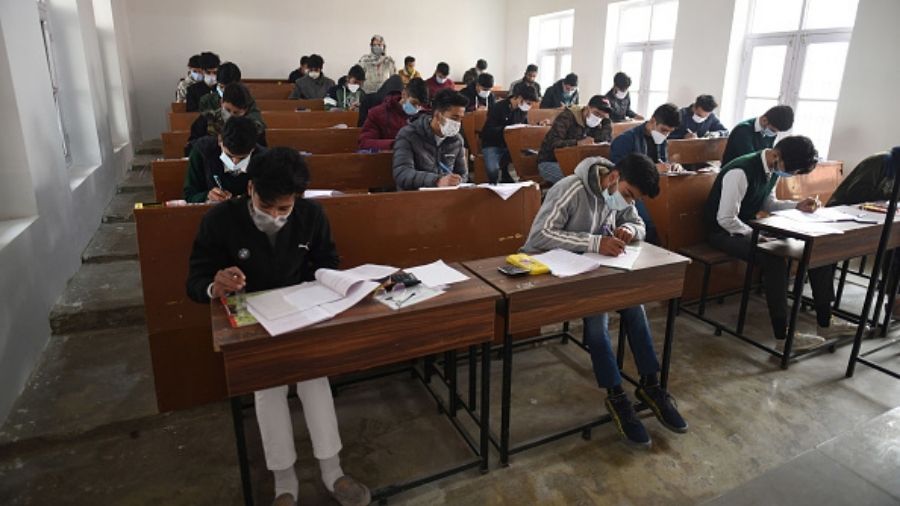 A high-level meeting could not arrive at a decision on pending Class 12 board exams on Sunday as several states objected to holding exams amid a pandemic, but the Centre indicated it was in favour of a short format exam for Class 12 with state boards allowed to take their own decision.

Education Minister Ramesh Pokhriyal Nishank sought detailed suggestions from state governments by May 25, asserting that "an informed, collaborative" final call would be taken at the earliest.

The Centre, sources said, would probably announce the dates on June 1, reported ndtv.com.

The Central Board of Secondary Education has suggested two options for the exams, which were postponed in view of the second wave of Covid infections. Reiterating that safety should be the top priority, the CBSE said it is taking a "flexible approach", reported ndtv.com.

Under the first option, the exams can be conducted within a period of three months -- one month of pre-exam activities and two months for the exams and declaration of results. Another 30 days will be allowed for compartmental exams. Exams will be held only for major subjects and marks for minor subjects will be allotted on the basis of performance in the major subjects.

August could be a likely month for holding exams, and the whole process is likely to go on till end September, the board said.

Under the second option, 90-minute exams will be held in 19 major subjects. The students have to appear in one language and three elective subjects only. Based on their performance in these subjects, the results of fifth and the sixth subjects, as the case may be, will be assessed. The exams will be held at designated and limited number of exam centres.

The students can take the exams at their own schools. "As the question papers will be delivered in electronic format to the centres, these exams do not need elaborate logistics and can be deployed and conducted in a flexible and responsive manner," the CBSE said in their suggestions.

The second option suggests the exams can be held twice by the board. Wherever the conditions are conducive, examinations could commence from a suitable date.

In the remaining locations the examinations will start after a fortnight of the first phase.

In case a student cannot write the exam due to any Covid-related issue, he/she will be provided another opportunity to sit for the exam.

The first phase exams can begin around July 15 and the second phase in the first week of August, the board said. The results can be declared by September 5.

"There is flexibility in this approach as the exam will be conducted in two phases, will be at own schools and will be of a shorter duration," the board said.

Last year, the board exams had to be postponed mid-way in March. They were later cancelled, and results were announced based on an alternative assessment scheme.

This time, CBSE had on April 14 announced the cancellation of Class 10 exams and postponed Class 12 exams due to the surge in Covid-19 cases. The decision was taken at a high-level meeting chaired by Prime Minister Narendra Modi.

For the 14,30,247 students who had registered for the Class 12 exams, the board exams were scheduled between May 4 and June 14, instead of the usual mid-February.

After the deliberations, minister Nishank said, "The meeting was extremely fruitful as we received immensely valuable suggestions. I have requested the state governments to send me their detailed suggestions by May 25. I am confident we will be able to arrive at an informed, collaborative decision regarding the exams and remove the uncertainty among students’ and parents’ minds by informing them of our final decision at the earliest."

"I want to reiterate that both students' and teachers' safety, security, and future are supremely important to us,'' he added.

Union Defence Minister Rajnath Singh chaired the over two-hour meeting. Union ministers Smriti Irani, Prakash Javadekar and Sanjay Dhotre were among those who attended the meeting, besides education ministers and secretaries of several states and Union territories.