Vardhan, Javadekar and Prasad out in Afternoon of Long Knives 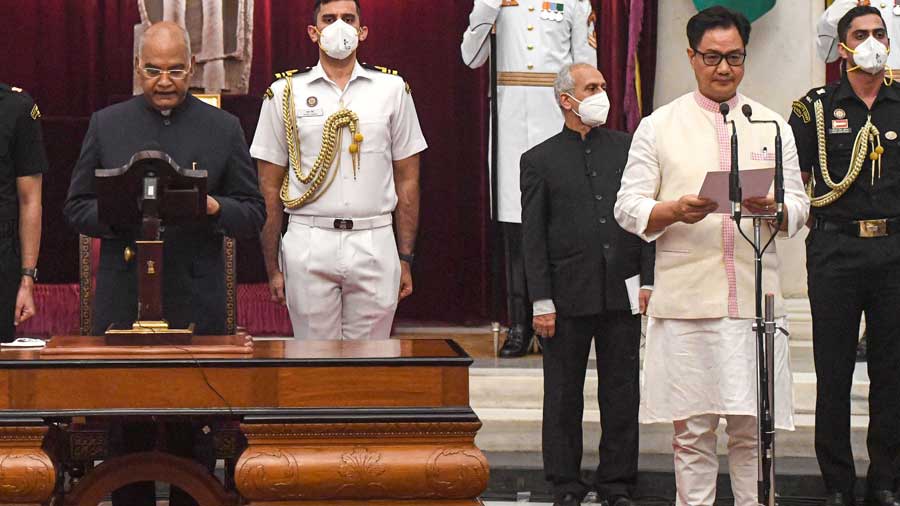 Everyone knew it was coming. But till the very last minute, nobody had a hint of the extent of the carnage that was about to take place as Prime Minister Narendra Modi axed a dozen ministers including health minister Harsh Vardhan and headline-hogging figures like Prakash Javadekar and Ravi Shankar Prasad. Vardhan is seen as the sacrificial lamb for the government’s failure to contain the catastrophic second wave pandemic. while the exits of Javadekar and Prasad come amid the ongoing Twitter standoff and a clash with media houses.

By nighttime, the critics were gathering to roast Modi for making a hash of handing out portfolios with one newcomer, Ashwani Vaishnaw, getting a bizarre mix of Railways, telecommunications, electronics and information technology. Vaishnaw, a newcomer to the Modi cabinet, is a former IAS officer who was a key figure in the Atal Bihari Vajpayee PMO, and holds an MBA from Wharton and an MTech from IIT Kanpur.

Another key takeaway from the shuffle is the downward slide of Piyush Goyal who loses the key Railways portfolio. Once considered a shining star, he has been losing ground with his ill-disguised ambition of becoming the finance minister. Goyal upset his mentor Arun Jaitley when he took charge of finance during Jaitley’s medical leave. Since then, it has been a downhill journey for him. In the swearing-in ceremony of the Modi government Version 2, he dramatically lost rank in the protocol order, being demoted to minister of commerce.

Less of a surprise was the downfall of Vardhan because it has been clear for some time that he has been given the role as the fall guy for the government’s failure to control the devastating second Covid-19 wave.  “Poor Dr Harsh Vardhan, a good man has been made a scapegoat for monumental failures at the highest level — nowhere else,” tweeted Congress MP Jairam Ramesh.

“The resignations of the Union Health Minister and the Minister of State, Health is a candid confession that the Modi government has utterly failed in managing the pandemic,” tweeted senior Congress leader P. Chidambaram.

Vardhan has now been replaced in health and family welfare by Gujarat MP Mansukh Mandaviya. In Gujarat, Mandaviya has been called the Minister for Padayatras because of the long walks he undertakes around the state for good causes. He’s an animal lover who studied veterinary sciences and later also studied political science. He’s a Rajya Sabha member.

In total, Modi booted out 12 ministers, including seven of cabinet rank, in his first ministerial overhaul since his sweeping 2019 win. They handed in their resignations in what was quickly dubbed the Afternoon of the Long Knives.  A total of 43 ministers, including 36 new members, were sworn into the Council of Ministers as part of of the mega-shakeup. Seven were promoted.

The Modi government, which used to criticise the previous Congress government for its jumbo ministerial team now has 30 cabinet ministers, up from 21. Totally there are now 77 ministers -- close to the maximum limit of 81. “In a clear sign that the government has its eyes on the Uttar Pradesh assembly elections, new cabinet includes seven ministers from UP.

“We will continue working to fulfil aspirations of the people and build a strong and prosperous India," Modi said after the swearing-in ceremony. Congress said the sheer size of the shakeup was an admission by the Modi government that it had massively underperformed.

The promotion of Anurag Thakur to the crucial Information & Broadcasting portfolio has evoked mixed reactions. At one level, he’s a polished performer in person. But he was banned from campaigning for 72 hours for declaring “shoot the traitors” during the Delhi elections. In his new job, he’ll have to conduct delicate negotiations with the media industry which is up in arms about proposals dealing with online news portals. Thakur will also supervise the efforts of India’s star athletes at the Ministry of Youth Affairs and Sports.

Also, Kiran Rijuju, a lawyer, has been given the extremely crucial Law & Justice portfolio, a step up from his role as minister of state for youth, sports and minority affairs.

Jyotiraditya Scindia, who’s new to the world of saffron, has been rewarded for his role in ousting the Madhya Pradesh Congress government with the highflying but temporarily grounded during the pandemic Civil Aviation portfolio. Scindia will get the knotty job of supervising the Air India sale and breathing life back into the aviation industry which has been pummelled by the pandemic. The civil aviation ministry was once held by his father, Madhavrao Scindia ,who died in a 2001 plane crash.

Hardeep Singh Puri, who was handling the Ministry of Civil Aviation as a junior minister, will now go on promotion and look after the stuff that goes into aeroplanes at the Ministry of Petroleum and Natural Gas. He will continue to look after the Ministry of Housing and Urban Affairs but as a full-fledged cabinet minister. Puri gets the unenviable task of shepherding through the highly controversial Central Vista project which is bound to earn him constant flak.

New to the government is another senior BJP figure, Bhupendra Yadav, who is taking over the critical Environment and Climate Change Ministry and also the Ministry of Labour and Employment. Yadav has been a key backroom BJP strategist.

Modi didn’t make any changes in the core ministries of defence, external affairs, home and finance, though External Affairs now gets three junior ministers including lawyer Meenakshi Lekhi. Amit Shah remains home minister but has also been named to head the new Ministry of Cooperation. The ministry will promote a cooperative-based economic development model as part of Modi’s goal of creating “Sahkar se Samriddhi” -- prosperity through cooperatives, according to a government statement.

One little-noticed minor casualty was Minister of Road Transport and Highways Nitin Gadkari who loses the shipping portfolio. Gadkari has been stuck in the same ministry for the last seven years and while he won’t be totally edged out because of his strong Nagpur connections, it’s clear he shouldn’t expect a promotion while Modi is the prime minister.

The reshuffle showed that the BJP has paid particular attention to Uttar Pradesh, Gujarat and Maharashtra and that it has also attempted extremely delicate caste engineering. There are seven ministers from Uttar Pradesh and, noticeably, they each represent key regions in the state. Reflecting caste sensibilities, in Gujarat, for instance, it’s brought in three Patels and three OBCs.

Unusually, the government also released information about the caste and subcastes of the new ministers who are being brought in, indicating considerable thought had been given to this issue even though the national elections are almost three years away.

The reshuffle has reduced the average age of the council of ministers to 58 from 61. The youngest new minister is Nisith Pramanik, 35, from Cooch Behar.

The Modi government has faced considerable setbacks since returning to power. Most importantly, it has been accused of failing to tackle the pandemic properly and get enough vaccines ready on time. Besides that, it’s also been accused of mismanaging the economy even before the pandemic struck.

Cabinet: 7 from UP with eye on polls