Cabinet reshuffle: Eye on 2022 polls, seven new ministers from UP

Of the newly inducted ministers, Anupriya Patel heads BJP ally Apna Dal (Sonelal) and was a minister in the first Modi government; the rest are from the BJP 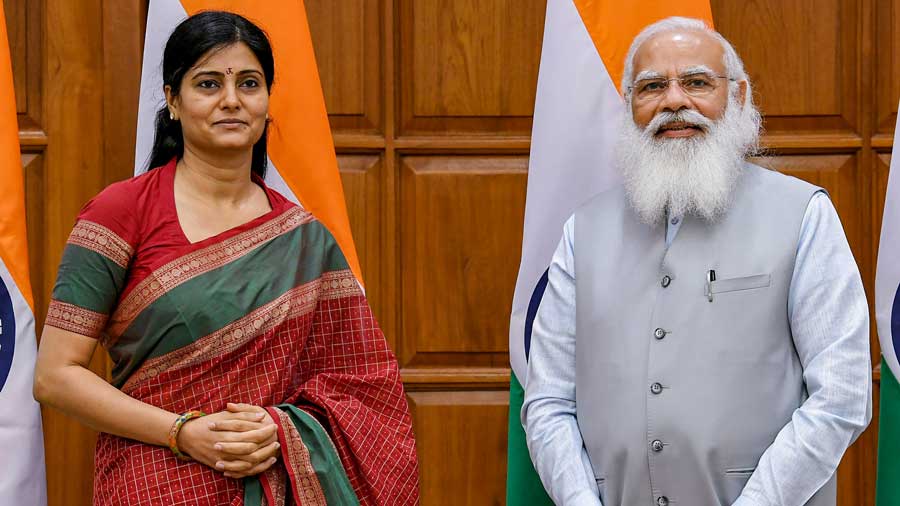 Seven ministers from Uttar Pradesh were sworn in at Rashtrapati Bhavan Wednesday, all picked with an eye on next year's assembly polls in the state.

Of the seven newly inducted ministers from UP, Anupriya Patel heads BJP ally Apna Dal (Sonelal) and was a minister in the first Narendra Modi government. The rest are from the BJP.

Anupriya Patel, Pankaj Chaudhary and B L Verma are from the Other Backward Classes, which BJP leader in UP say make up 50 per cent of voters in the state.

Ajay Kumar is the lone Brahmin in this batch of ministers from the state.

There was speculation earlier that Jitin Prasada, a Brahmin face of the Congress who recently joined the BJP, may be given a ministerial berth. But with Ajay Kumar, the state's Terai region also gets representation.

Barring Rajya Sabha MP B L Verma, the new ministers are from the Lok Sabha.

A regional balance is maintained.

Anupriya Patel (Mirzapur) and Pankaj Chaudhary (Maharajganj) are from eastern Uttar Pradesh. From western UP, Baghel represents Agra and Rajya Sabha MP B L Verma hails from Budaun. Bhanu Pratap Singh Verma, who represents Jalaun is from the Bundelkhand region.

BJP leaders say that the OBCs constitute about 50 per cent of the voters in the state and the Scheduled Castes make up 20 per cent.

Anupriya Patel, a minister of state at the Centre from 2016 to 2019, has been jockeying for a separate ministry to solve problems faced by the OBCs.