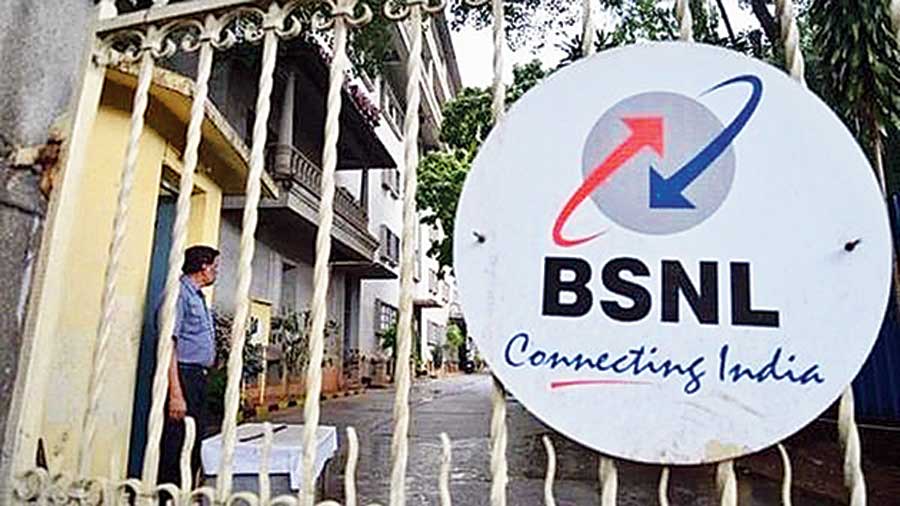 The union has urged the Centre to keep its promise and roll out 4G services to help the state-run telecom company compete with private players
File picture
Our Correspondent   |   Bangalore   |   Published 26.10.20, 12:03 AM

The BSNL Employees’ Union has planned to intensify its campaign and launch an agitation to get its long-standing demands fulfilled by the Centre.

The union has urged the Centre to keep its promise and roll out 4G services to help the state-run telecom company compete with private players.

“It is a year since the government announced its revival package. But nothing has happened yet,” BSNLEU Karnataka president C.K. Gundanna told The Telegraph on Sunday.

“Our employee strength has been halved, thanks to an ill-timed voluntary retirement scheme. In December 2019, we had 1.6 lakh workers across the country. Now it’s hardly 66,000,” Gundanna said, citing this as one of the biggest handicaps forced on the company.

“We know the Centre is trying to kill us to help Reliance Jio that has benefited a lot since its launch. But let them realise that we have been getting new subscribers despite the lack of 4G services,” he said.

He said BSNL added 3.88 lakh subscribers in July while Vodafone-Idea lost 37.26 lakh customers. But a significant chunk of subscribers went to Jio and Airtel.

“The fact that people still trust us is enough reason for the Centre to permit us to roll out 4G services. While the private telecom companies are set to launch 5G, we are still being denied 4G,” he said.

He said the trade union’s executive committee meeting held recently had called for an agitation. “We will be joining the nationwide general strike on November 26 called by all trade unions against the Centre’s policies. That apart, we are chalking out other strategies so that we can get across our demands without troubling our customers,” said Gundanna.

The trade union also raised the issue of contract employees whose services were discontinued without clearing pending salaries of 18 months.

“More than 70 per cent of our contract workers have been removed without clearing their salary dues. We demand that they must be paid without any more delay,” Gundanna added.

The union put forth a 10-point charter of demands, which sought a level playing field with private players, retention of contract workers, revision of wages and pension and Rs 10 lakh compensation to the families of employees who die of Covid-19.