The main Opposition Congress got a drubbing, as it won only 55 seats and failed to open its account in Surat 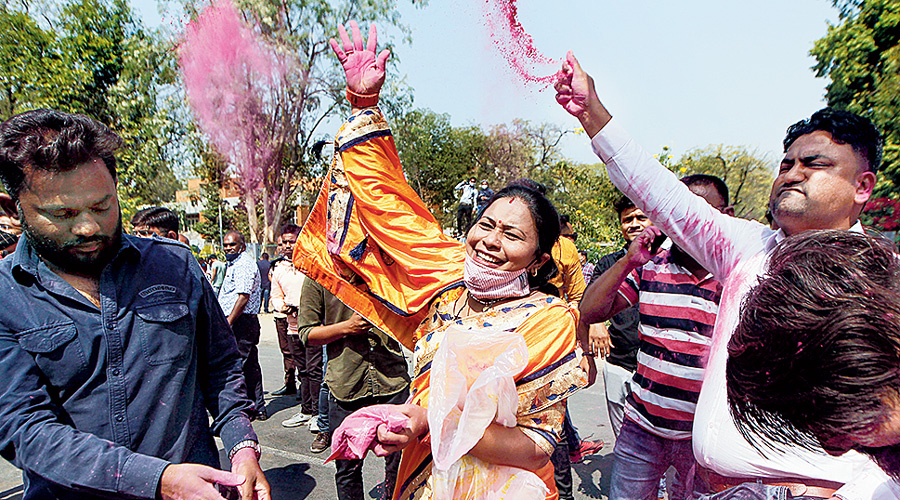 The BJP on Tuesday swept elections to the six municipal corporations in Gujarat by winning 483 out of 576 seats.

The ruling party retained power in all the six municipal corporations in the state — Ahmedabad, Surat, Vadodara, Rajkot, Jamnagar and Bhavnagar.

The main Opposition Congress got a drubbing, as it won only 55 seats and failed to open its account in Surat.

The Aam Aadmi Party put up an impressive show by winning 27 seats, all in Surat, and emerged as the main Opposition in the municipal corporation. The AAP had for the first time fielded 470 candidates across all the six corporations.

The Congress won seats in single digits in three corporations and drew a blank in Surat. The party won 25 seats in Ahmedabad, 11 in Jamnagar, eight in Bhavnagar, seven in Vadodara and four in Rajkot.

Asaduddin Owaisi’s AIMIM, which also contested the local body polls in Gujarat for the first time, won seven seats in Ahmedabad’s Muslim-dominated Jamalpur and Maktampura wards. Three candidates of the Bahujan Samaj Party won in Jamnagar, while an Independent won in Ahmedabad.

The BJP had won 389 seats and the Congress 176 across these six municipal corporations in the 2016 elections. The BJP gained 94 seats while the Congress lost 121 seats this time.

Prime Minister Narendra Modi hailed the victory. “Today’s win across Gujarat is very special. For a party that is serving in a state for over two decades to record such a phenomenal win is noteworthy. It is heartening to see widespread support from all sections of society, particularly the youth of Gujarat towards BJP,” he tweeted.

“The people of Gujarat have provided a subject to political analysts who can now study how the concept of anti-incumbency does not apply in the state,” he added.

Patel tweeted: “Many th­anks and congratulations to all the winning candidates, BJP office-bearers, workers and the voters of Gujarat for the glorious victory of Bhar­atiya Janata Party in the elections.”