BJP pushed into a corner, Congress furious over Godse remark

The party went into damage control, sensing the comments could hurt the party's image and poll prospects 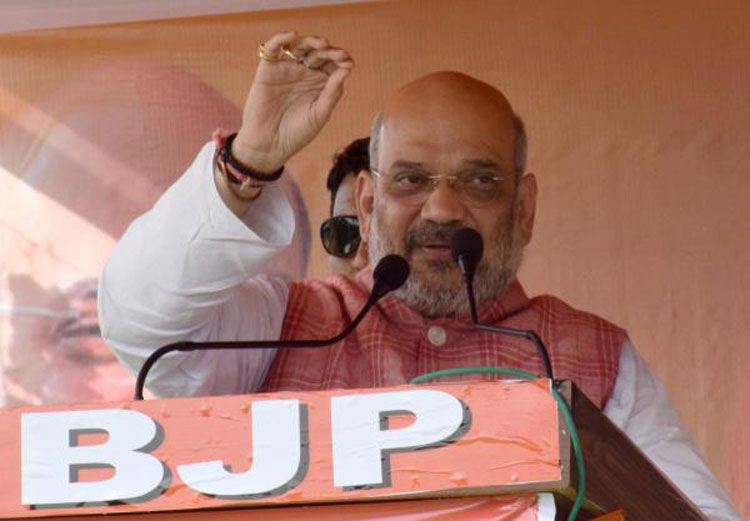 As campaigning for the 2019 general elections wound down on Friday, the BJP was pushed into a corner and forced to ask three of its leaders to explain their comments on Mahatma Gandhi's assassin Nathuram Godse, as the Congress questioned the prime minister's silence on the row.

The Pandora's box opened on Thursday with BJP's Bhopal Lok Sabha candidate and Malegaon blast accused Pragya Singh Thakur lauding Godse as a 'patriot' and issuing an apology hours later saying she respected Gandhi and his work for the country cannot be forgotten.

Stating that the comments were against the party's ideology, Shah asked the party's disciplinary committee to submit a report on the issue in 10 days for further action.

'They have withdrawn their statements and also apologised. However, their remarks are against the decorum of public life and the BJP and also against the party's ideology. Taking serious note of their remarks, the party has decided to send them to the disciplinary committee,' Shah said on Twitter.

'Dear MNM family and fans, this is an acid test for our decorum and demeanour. Do not listen to their noises and be drawn into their violence,' the actor-politician said amid incidents such as hurling of stones and footwear during his bypoll campaign in Chennai.

Campaigning for India's seven-phase elections ends on Friday evening. The last day of polling is May 19 and the votes will be counted on May 23.

The party went into damage control, sensing the comments by the three could hurt the party's image and its poll prospects in the last 59 seats that vote on Sunday. Over the last year or so, the BJP has been promoting itself as a torchbearer of Gandhi's ideas and legacy, which has long been the Congress domain.

Congress leader Kapil Sibal questioned Prime Minister Narendra Modi's silence on Pragya's remarks and said he can only pray for the country.

In a tweet, Sibal said, 'When Sadhvi Pragya says: 'Godse a Deshbakht' and Modi is silent with Vidyasagar's statue a victim of the violent I can only pray for my country and hope that one day the silent majority will keep violence at bay.'

and Modi is silent

His party colleague, former Karnataka chief minister Siddaramaiah, stepped into the debate to say Godse, who killed the father of the nation in January 1948, was inspired by RSS ideology.

'Godse was inspired by Sangh Pariwar's ideology & so is Pragya. Former killed our Mahatma & the latter killed Mahatma's children. Pragya who calls Godse a patriot is endorsed by @narendramodi Is this the sign of an attempt to proliferate Sangh's hatred based ideology,' he tweeted.

Union minister Hegde, who also found himself in the news with a purported tweet justifying Godse's action, claimed his account was hacked.

'My Twitter account has been breached twice in the past one week and certain tweets have been posted on my timeline which has been discarded and deleted. Regret the posts attributed to me.'