Bihar: Hint of imminent change of guard in RJD and JDU

While Lalu might step aside in favour of Tejashwi, Union minister R.C.P. Singh could lose the position of Janata Dal United national president 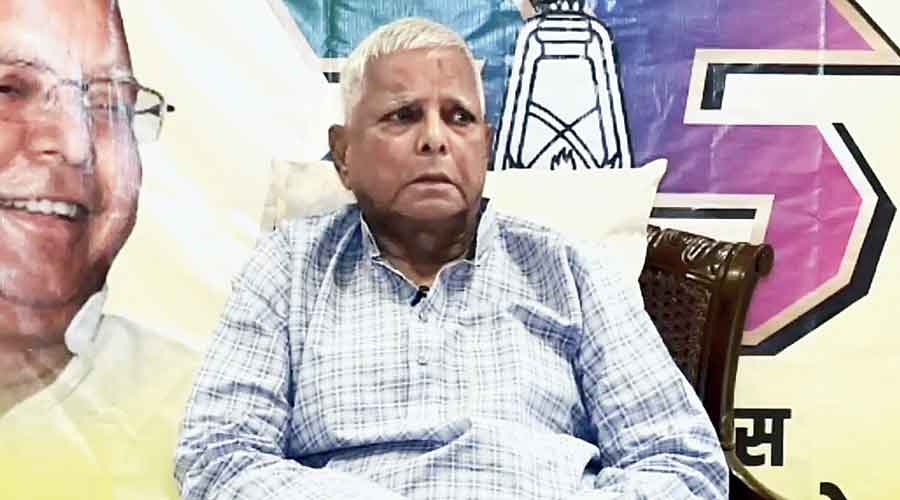 A churning in Lalu Prasad’s RJD and chief minister Nitish Kumar’s JDU has indicated an imminent change of guard in the two largest parties of Bihar.

While Rashtriya Janata Dal chief Lalu is considering abdicating in favour of his younger son Tejashwi Prasad Yadav, Union minister R.C.P. Singh could lose the position of Janata Dal United national president. These moves will have wide-ranging political ramifications, and will also decide the trajectory of Bihar politics in the coming months.

The upheaval started in the RJD, the largest single party in the legislative Assembly with 75 out of total 243 seats, earlier this month when its state unit president and veteran politician Jagadanand Singh, 77, tendered his resignation apparently on health grounds.

A few senior party leaders said that he took the step after becoming annoyed by the continuous barbs of Lalu’s eldest son and Hasanpur MLA Tej Pratap Yadav.

Though RJD national president Lalu has not accepted the resignation so far, sources say that Jagadanand is quite adamant about leaving the post. This has led to a hunt for his successor.

There are also talks that Lalu wants to abdicate on the grounds of poor health in favour of Tejashwi, who successfully led the party in the 2020 Assembly elections. The RJD chief is diabetic and is suffering from heart and kidney-related ailments.

The deliberations on these issues are currently going on between Lalu, Jagadanand, Tejashwi at the house of Rajya Sabha member and Lalu’s eldest daughter Misa Bharti in Delhi. Rabri Devi is also present there.

Most of the RJD leaders are tightlipped on the two sensitive issues that could impact the future of the party.

“Though no decision has been conveyed to us so far, it is a well-known thing that Tejashwi has always wanted to become the national president of the party because it will give him more grip on it. This will come handy if a power struggle breaks out with his siblings Misa Bharti and Tej Pratap. Moreover, he has proved himself to be a worthy politician who could succeed Lalu,” a former RJD MP told The Telegraph on the condition of anonymity.

Another senior RJD leader pointed out that Tejashwi was in favour of a young and energetic person as the state unit president, who could understand and readily accept his directions, and be proficient in the use of technology, especially mobile phones, social media, computers. Jagadanand has been a failure on these fronts.

“Former ministers Shyam Rajak and Alok Mehta are being considered along with a couple of Yadav legislators. There are indications of Tej Pratap Yadav also being in the race. Lalu, known as a doting father, could accommodate him (Tej Pratap) to stop any power struggle breaking out in the family, but it will spell doom for the party because he is not accepted as a serious politician,” the RJD leader said.

However, RJD national vice-president Shivanand Tiwari rejected all speculation over a change in the leadership of the party.

“Tejashwi is lucky that his father is there with his experience to guide him and to give suitable suggestions. The media has created speculation about upcoming leadership changes. There is no doubt that he (Tejashwi) is the leader of the party, but right now there is no need for him for this (to become RJD national president),” Shivanand said.

A leadership change in the ruling JDU is also being smelled round the corner as the party is gearing up for its national executive in Delhi on July 31.

Senior leaders in party, including Nitish, washed their hands off the issue by asserting that Singh was solely responsible for the decision. Coupled with it is the fact that the JDU performed poorly in the 2020 Assembly polls by winning just 43 seats out of 115 it contested, thereby slipping to the third position in the state.

“Singh, a former bureaucrat, has not been able to come out of his bureaucratic mode of functioning. He is no worthwhile political experience and is no leader of the masses. Nitish is now trying hard to consolidate and expand the vote base of the party. This is the reason that he has asked leaders like Upendra Kushwaha and Umesh Kushwaha to tour the state,” a top JDU leader said.

“It won’t be a surprise in this scenario if Nitish again takes the reign of the party in his own hands or appoints Upendra or Munger MP Lalan Singh as the national president of the party. Appointing Lalan will assuage his feelings of having been left out in the race for Union cabinet berth. It will also send a message that ours is an all-inclusive party,” the JDU leader added.

Sources in the JDU asserted that Nitish is already planning with his eyes on the 2024 general elections, and will go for leadership changes in the party accordingly.