Stickers bearing the slogan ‘Na bhoole hain, na bhoolne denge’, the hashtag ‘Justice for Sushant’ and the lotus, the party's electoral symbol, were put up on shops, auto-rickshaws, vehicles and kiosks 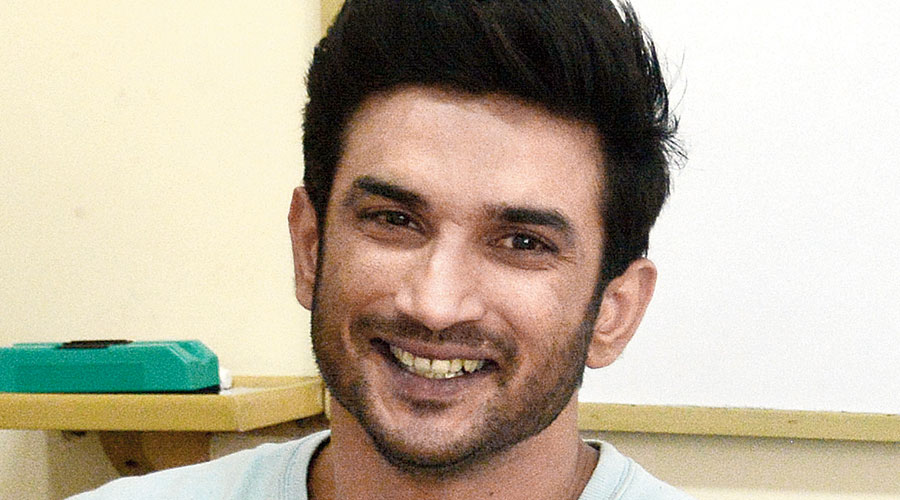 The BJP’s culture wing in election-bound Bihar has released stickers and masks bearing Sushant Singh Rajput’s photographs, drawing allegations that the party is trying to milk the actor’s death for political gain.

The stickers bear the slogan “Na bhoole hain, na bhoolne denge” (have neither forgotten, nor will allow to be forgotten) with a smiling picture of the actor, the hashtag ‘Justice for Sushant’ and the lotus, BJP’s electoral symbol. The masks bear photographs of the actor.

The stickers and masks have been spotted in Patna in large numbers since Saturday. Many BJP workers were seen pasting the stickers on shops, auto-rickshaws, vehicles, and kiosks just as political parties do during election campaigns.

The BJP art and culture cell’s state convener, Barun Kumar Singh, told The Telegraph that 25,000 stickers and 30,000 masks were made, but denied that it had anything to do with politics.

Barun said: “This has been an emotional campaign for us. It has nothing to do with politics. We had started it on June 16, two days after Sushant’s death to ensure that justice is done in the case. We were the first to demand a CBI inquiry and our senior leaders had met the actor’s father.” 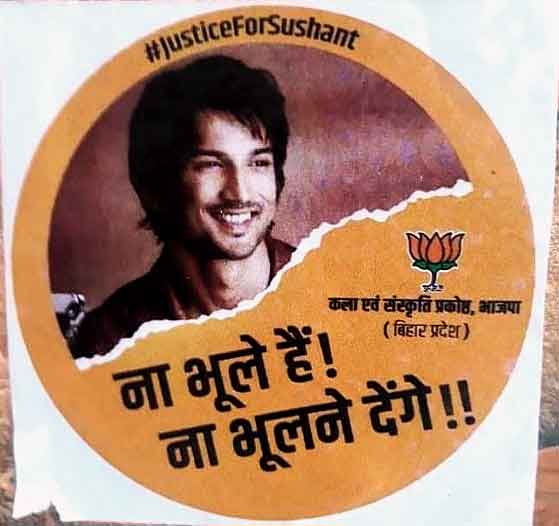 Sushant was found dead in his flat in Mumbai on June 14 in what was suspected to be a suicide. His father later filed an FIR with the Bihar police accusing the actor’s girlfriend Rhea Chakraborty and others of abetment of suicide. Then he levelled murder allegations. The CBI, Enforcement Directorate and the Narcotics Control Bureau are now probing the case.

The Patna-born actor hails from the influential Rajput caste, which makes up 5 to 6 per cent of Bihar’s electorate.

BJP spokesperson Nikhil Anand denied the party had any hand in the Sushant masks and stickers. “It has not been done by the BJP. It is a work of the art and culture forum of the party,” he said.

But the Opposition accused the BJP of using the dead for politics. RJD spokesperson Mritunjay Tiwary said: “We had been saying since the very beginning that the BJP was least bothered about justice for Sushant or his family, and was trying to politicise the actor’s death. The stickers and masks have proved this now.”