The police were called inside the premises and they, along with the marshals, allegedly thrashed, abused and threw out several MLAs and journalists 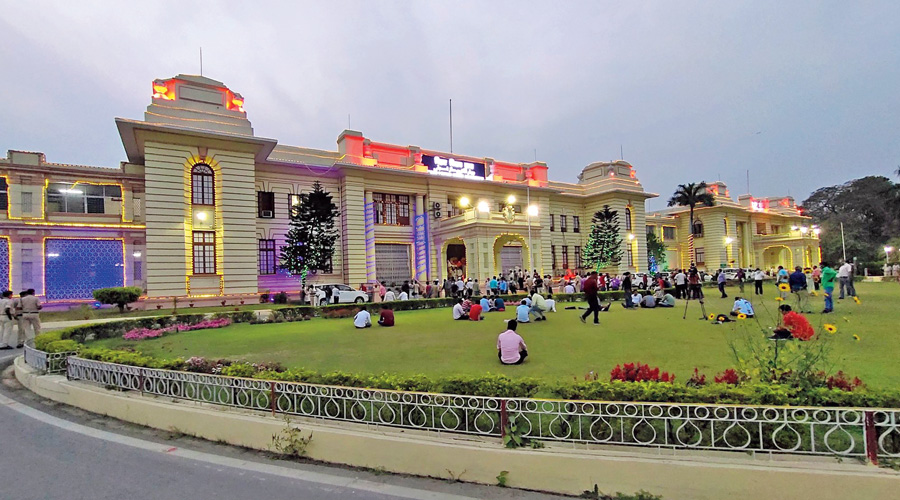 The Bihar legislative Assembly premises while opposition MLAs were being marshalled out.
Sanjay Choudhary
Dev Raj   |   Patna   |   Published 24.03.21, 02:11 AM

Unprecedented scenes of violence were witnessed in the Bihar Assembly on Tuesday as the Opposition opposed a police bill tooth and nail and tried to hold the Speaker captive in his chamber.

The police were called inside the premises and they, along with Assembly marshals, allegedly thrashed, abused and threw out several MLAs and journalists. The House was adjourned several times in between.

On the other hand, the streets of the capital turned into a war zone as leaders and supporters of the Rashtriya Janata Dal (RJD) clashed violently with the police while trying to lay siege to the Assembly to protest the deteriorating law and order situation.

Several protesters, journalists and police personnel were injured in the clash in which sticks, bricks and water cannons were freely used on the streets. RJD leaders Tejashwi Prasad Yadav and Tej Pratap Yadav sported helmets while leading the protest and were detained by the police for some time before being allowed to go.

Mayhem was the order of the day in the Assembly as soon as it met in the morning. Members of the Opposition parties — RJD, CPI-ML and Congress — trooped into the well demanding the withdrawal of the Bihar Special Armed Police Bill, 2021.

They tore papers and scattered them all around the House and shouted slogans against chief minister Nitish Kumar and his government. As the bedlam increased, Assembly Speaker Vijay Kumar Sinha adjourned the proceedings till noon.

The bill, which seeks to change the name of the existing Bihar Military Police to Bihar Special Armed Police, and provide it the power to arrest people or conduct searches without warrants while guarding various premises or installations, or in the course of duty, has become a bone of contention between the Opposition and the ruling parties since the day it was circulated.

The Opposition parties took an aggressive stand on the bill on Tuesday as it was to be tabled in the Assembly for its passage.

As the Assembly resumed at noon, the Opposition again disrupted the proceedings claiming that the bill will usher in police rule in the state as people will not be able to even approach the court against any atrocity by the men in uniform.

They tried to overturn a table kept in front of the Speaker’s chair. The comptroller and auditor general’s (CAG) report on Bihar was tabled amid the ruckus and the House was adjourned till 2pm.

When the proceedings resumed, the protests also resumed more aggressively and the Assembly was adjourned for an hour. When it met again, the Opposition legislators tried to charge the treasury benches and snatch the police bill that was being tabled by minister Bijendra Prasad Yadav. Somebody threw a paperweight at the Speaker’s chair.

The marshals in the House formed a protective wall to safeguard legislators belonging to the ruling National Democratic Alliance (NDA). The Opposition also tried to overturn a table and broke it after being unsuccessful in their endeavour.

The entreaties of the Speaker did not elicit any response and the proceedings were adjourned till 4.30pm.

It was around that time when the situation worsened. The Opposition lawmakers shut the door of the Speaker’s chamber with a rope with Sinha inside and squatted outside in an attempt to confine him inside and not allow the Assembly to function.

The police were called in after the marshals failed to remove the Opposition legislators. District magistrate Chandrashekhar Singh and senior superintendent of police Upendra Sharma also rushed to the spot.

The police charged at the protesting legislators, thrashed, abused, dragged and forcibly threw them out of the Assembly building. Several MLAs suffered injuries in the clash. RJD legislator Satish Kumar Das became unconscious and was carried away in an ambulance to hospital.

“We have been beaten up by the police. See how the government is treating elected representatives,” said RJD legislator Sudhakar Singh said.

Another RJD lawmaker Sangeeta Kumari asserted that the “police atrocities on democratic institutions have made clear the intention of the government. This shows what will happen if the police are given unbridled powers”.

The police and district administration officials present there also allegedly attacked the journalists trying to report on the incident.

Meanwhile, the House failed to resume at the given time, but attempts were made to do so again at around 6pm.

However, this time women MLAs surrounded the Speaker’s chair. Women constables were called in and they were dragged outside the House. Once they were removed, the male legislators from the Opposition parties took their place. The marshals and the police personnel forcibly removed them again.

Opposition leaders and sons of RJD chief Lalu Prasad — Tejashwi and Tej Pratap — were present in their chambers in the Assembly during the mayhem. There was a scuffle between Tejashwi and police personnel in the evening, but the RJD leader restrained himself after being asked to step back.

Meanwhile, Nitish told The Telegraph: “The bill is mainly to change the nomenclature of Bihar Military Police to Bihar Special Armed Police. They will be able to arrest somebody without warrant if he or she is threatening the security arrangements or is committing any crime. The arrested person would be sent to the nearest police station.”

“Many states have implemented such provisions. We have incorporated steps that will ensure officials are punished with imprisonment from seven years to life term if they misuse the powers given to them,” Nitish added.

However, Nitish said he has “not witnessed such scenes in the Assembly in his life”.

A large number of police personnel and state rapid action force entered the Assembly late in the evening. They threw out any opposition MLA who was protesting against the bill.

CPI-ML legislator Mehboob Alam was also marshalled out of the Assembly in the evening. “We are being beaten up inside the House for protesting against the black bill giving unrestrained powers to the police. We will not allow this bill to be passed. The House is not in order, but the Speaker is trying to get it passed through the backdoor. This is all being done at the behest of chief minister Nitish Kumar.”

The police bill was passed at 7.34pm while the Opposition walked out after a few of its legislators tore copies of the bill and threw it around in the House.

Speaker Sinha later announced: “Action will be taken against the legislators who have indulged in vandalism and inappropriate behaviour.”

The Opposition legislators later demonstrated at the entrance to the Assembly and demanded the resignation of Nitish for the attack on democracy and undermining the democratic traditions at the hands of the police.