‘Even some people in the BJP believe that what is happening to the farmers, to the poor, to the institutions — the concentration of wealth — is not good’ 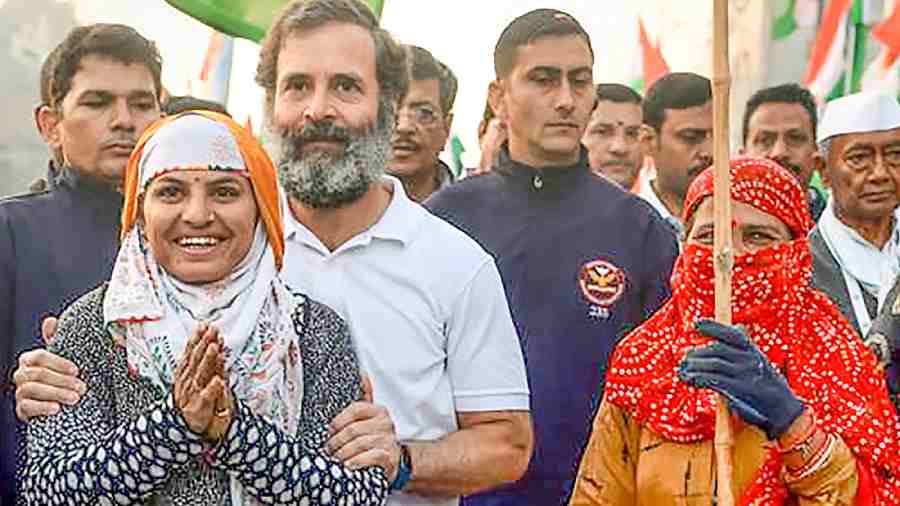 Rahul Gandhi on Monday said the Bharat Jodo Yatra had not been planned for political returns and that its sole purpose was to convince the people that India would suffer irreparable damage if it continued on its current path.

He said the Yatra had succeeded to a great extent. “This Yatra has gone beyond the Congress. It now represents India’s soul, it reflects India’s voice,” the former Congress president told a news conference at Indore, Madhya Pradesh.

Asked whether a robust political opposition to Narendra Modi’s dominance might take shape after the Yatra, Rahul said: “This is my responsibility. In a way, my tapasya — tapasya is not done to gain something. I have no personal interest. But I strongly felt the hate and violence being spread in the country was dangerous. This will damage the country.

“I wondered, ‘What is my responsibility?’ Then I decided to do something against this politics of hate, fear and violence. And this feeling is shared by many people within and outside the Congress.”

Rahul added: “Even some people in the BJP believe that what is happening to the farmers, to the poor, to the institutions — the concentration of wealth — is not good. I didn’t plan this Yatra for political returns. No matter (whether) I get anything in return or not, I had to do this.”

Asked whether the Yatra would “help Rahul Gandhi”, he shot back: “I have forsaken Rahul Gandhi long ago. Rahul Gandhi is in your mind, not mine. This is our philosophy. Try to understand; this will help you.”

Rahul seemed in the mood to delve into this philosophical topic but party communications chief Jairam Ramesh nudged him to wrap up the interaction on time.

Asked what changes the Congress might see on the basis of the experience of the Yatra, Rahul said he was not thinking about politics or the Congress.

“The spirit of the Yatra is to make the country focus on the attempt to change its nature. This country has never been fearful. Even in the worst of times, India was not scared. The people of India have a particular culture — the culture of compassion, of respect, of affection. This is our biggest strength,” he said.

“You ask anybody — a villager, a billionaire, or the American President — they will say that India’s strength is compassion. You don’t believe it but the objective of the Yatra is not political. It is to remind the people what the true nature of this country is, what the culture and history of the country is, what its DNA is. Where India stands today, if we continue moving on the same path, the country will suffer enormous damage both at the domestic and international levels.”

This appeared a subtle suggestion that the RSS-BJP did not understand India and that its nationalism was not in sync with India’s civilisational values.

The RSS-BJP has refrained from engaging with Rahul on the issues raised by the Yatra and chosen to trivialise the programme instead, alleging the Congress historically practised “Bharat Todo” by accepting Partition.

Rahul said the country’s people had endorsed the objectives of the Yatra.

“Maharashtra surpassed all the other states in terms of crowds. We too thought we had seen the best. But what happened yesterday in Indore was better than Maharashtra. Now, you see, Rajasthan will be a problem,” he added sarcastically.

Recalling some of his memorable experiences during the Yatra, he said: “One little girl came one day. She gave me a letter and asked me to read it later. After she left, I read it. She wrote, ‘Don’t think you are alone. I am walking with you. I wanted to walk more but my parents won’t allow it. But I am with you’.”

Rahul said the BJP had tried to destroy his image by spending crores of rupees but the truth could not be suppressed. “Their attacks indicate that I am on the right path. My strength is that now I understand the RSS-BJP much better,” he added.

Asked about the possibility of the Congress taking back those who had pulled down the Kamal Nath government in Madhya Pradesh, he said: “This will be decided by (party president) Mallikarjun Kharge and the local leadership. But I have an opinion. Those who sold themselves for money should not be trusted.”

To a question about Rajasthan chief minister Ashok Gehlot calling his Congress colleague Sachin Pilot a “gaddar (traitor)”, Rahul said: “Both are assets for the party.”