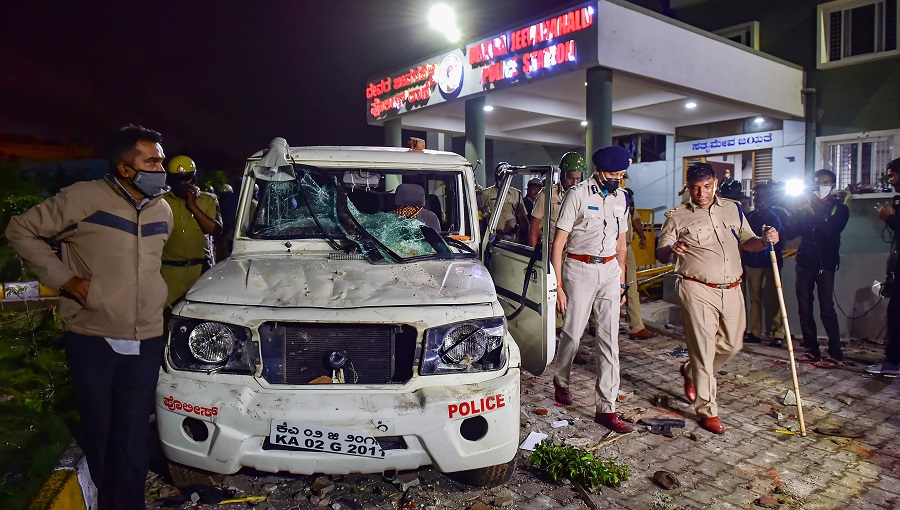 Police stand guard after a mob vandalised a police station following a social media post by a relative of a MLA, in Bangalore on August 12
PTI
Our Bureau And Agencies   |   Bengaluru   |   Published 18.11.20, 10:52 PM

The National Investigation Agency (NIA) on Wednesday conducted several search operations at Bengaluru in connection with the August 11 riots and attacks on the DJ Halli and KG Halli police stations, said an official.

The searches were conducted in 43 locations across the city, including four offices of the Social Democratic Party of India (SDPI), which is the political outfit of the Popular Front of India (PFI).

“The cases pertain to large-scale rioting, causing injuries to police personnel, destruction of public and private property, including the police stations' buildings and public and private vehicles,” the NIA official said, while also informing that the rioters were carrying lethal weapons.

The attacks, which set off fear and panic in the nearby locales, were aimed to cause terror in the society, the spokesperson said.

The central agency recovered incriminating material relating to the SDPI and the PFI, including swords, knives and iron rods, which were seized during the searches, he added.

On August 11, over 3,000 rioters went on a rampage and set fires to the residences of Congress MLA R Akhanda Srinivasa Murthy, his sister Jayanthi and the two police stations.

The incident took off due to an alleged offensive post by the nephew of the Congress MLA, and resulted in the death of four persons. While three of them were killed in police firing, one sustained abdominal injuries during the violence, which led to his demise.

Former Congress mayor R Sampath Raj, an accused in the violence, was recently arrested, while further investigation regarding the case is underway.