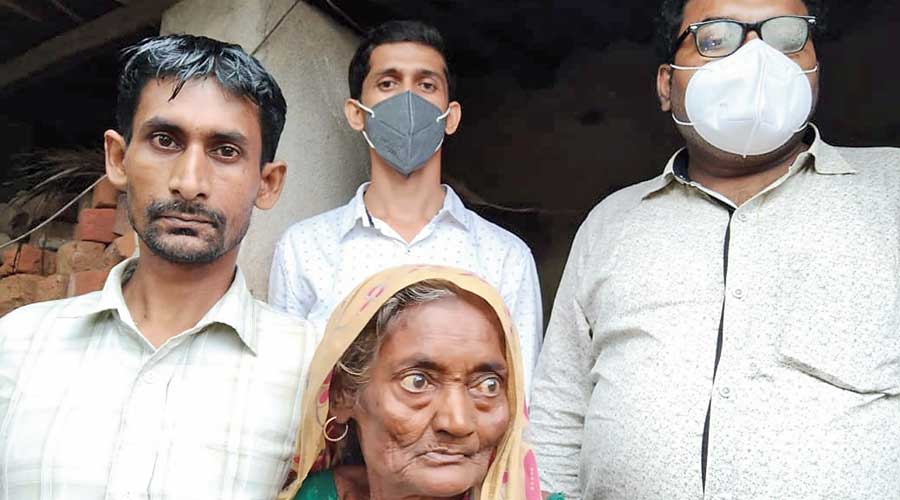 Gangadhar Pramanik (left) with his mother Bharati at their Bankura home, along with officials of Citizens for Justice and Peace (CJP), on Wednesday
Telegraph picture
Snehamoy Chakraborty, Umanand Jaiswal   |   Guwahati, Bolpur(Birbhum)   |   Published 16.09.21, 02:59 AM

Gangadhar Pramanik returned to his home in Bengal on Wednesday from a detention camp in Assam, carrying with him a harrowing sneak preview of the probable fate that awaits countless people when citizenship regimens are enforced blindly in a country with a poor documentation record.

Gangadhar, 33, had left his remote village in Bankura in search of work around 10 years ago. He ended up spending over three years at a detention centre in Assam’s Goalpara after he was declared a foreigner. The detention centres are officially called transit camps.

He allegedly could not produce documents supporting his citizenship after he was picked up by the border police who are expected to serve notice seeking such papers. Usually, if a person fails to furnish the documents, the case is sent to a superintendent of police who, if unsatisfied, can refer it to one of the several Foreigners Tribunals in Assam.

If the tribunal decides the suspect is a foreigner, he or she will be kept in a detention centre. Attempts are expected to be made to deport such foreigners but India does not have a deportation treaty with Bangladesh, the neighbour usually targeted in India over illegal entry although recent trends suggest a sharp decline in such movements.

Gangadhar’s case is not linked to the preparation of the National Register of Citizens (NRC) — a contentious exercise whose culmination in Assam was followed by the Citizenship Amendment Act that convulsed the country in the latter half of 2019.

But his detention shows what might happen to those who cannot prove their citizenship and are kept out of the NRC and the treatment that awaits them at the detention centres. Those who do not figure in the final NRC in Assam will eventually have to move the same Foreigners Tribunals for an opinion on their citizenship status.

The BJP, an  advocate of the NRC as well as its extension to the rest of India, found itself questioning the final figures in Assam as they did not match its assumptions.

The break-up has not been disclosed but Hindus are said to account for a large number of people who could not furnish citizenship proof and, as a consequence, were kept out of the NRC in Assam.

Gangadhar was released on bail from the detention centre following the intervention of Citizens for Justice and Peace (CJP), a platform of human rights defenders that in the past one year has helped release 50 detained people in Assam. The CJP has also assisted 12 lakh people to fill up forms for the NRC.

A CJP team, headed by its Assam chapter in-charge Nanda Ghosh, accompanied Gangadhar to his Radhanagar home on Wednesday and reunited him with his mother Bharati who had been surviving the last three years with aid from neighbours.

Gangadhar was detained on December 12, 2017, and sent to the Goalpara detention centre. He was accused of not responding to a notice in Assam and not showing any documents to prove his citizenship. Gangadhar said he did not receive any notice.

“I went to Assam around 10 years ago in search of a job. I had planned to return home after making decent savings to help my needy family,” Gangadhar told The Telegraph from his Bankura home.

“I used to work at a roadside eatery on the outskirts of Guwahati but my life changed after I was picked up in the winter of 2017 by the police and put in a jail-like place in Goalpara. I was unaware why they dumped me there but I remember I was labelled a foreigner,” Gangadhar added.

Recollecting the three years at the detention centre, Gangadhar said he made several attempts to flee from the “hellhole”. When he could not, he had contemplated committing suicide, Gangadhar said.

“The police kept round-the-clock vigil and eight of us were confined to a small room. It was difficult to escape and my attempts did not work. I was depressed,” said Gangadhar, who has pledged never to step out of Bengal again in search of work.

Struggling for words, Gangadhar said a typical day at the detention centre began with a cup of black tea. At 11am, lunch of rice, dal and vegetables was served. The last meal of the day was at 5pm.

Ghosh, who along with CJP advocate Abhijeet Choudhury brought Gangadhar to Radhanagar, said: “We found that all those who have spent a few years at the detention centre have been left mentally traumatised. They have become unusually quiet and find it difficult to recall events.”

They arrived at Burdwan station by the Saraighat Express and travelled to Gangadhar’s village from Radhanagar by car.

Hearing about the arrival of Gangadhar, a large number of villagers rushed to the near-dilapidated, tin-roofed house of the Pramaniks, Ghosh said.

Between the time Gangadhar had left home and returned on Wednesday, his father Mantu Pramanik had passed away and his sister had got married in Bihar.

“His father, a marginal farmer, died a few years ago thinking about his son as Gangadhar remained untraced. After his father’s death, his mother Bharati became helpless. We helped her survive with foodgrains and clothes for the past few years. We had no idea that Gangadhar was in a detention camp,” said Ashis Dey, a neighbour and social activist.

It was a chance incident that led to Gangadhar’s release from the centre. The CJP team had come to know about him from two persons whose release they had helped secure in July.

“We came to know about Gangadhar in July and immediately initiated steps to get him released. The two persons we helped get released had told us that Gangadhar was in a terrible mental condition. The release took time as it was difficult to get someone in Assam who would stand as a guarantor to secure his bail. Relevant documents of Gangadhar’s citizenship will have to be provided over time,” said Ghosh.

According to the bail order in Assam, Gangadhar will have to visit Bishnupur police station in Bankura once a week. Ghosh and his advocate went to the police station and the village police camp to inform them of the bail conditions.

“We have done all legal formalities and handed him over to his family. It is really a happy moment for us,” said Ghosh, adding that the case to prove Gangadhar’s citizenship would continue.

For more on Citizen's For Justice & Peace log on to: https://cjp.org.in/

Poisoned fruits: A family of lies