Services across the country severely hit 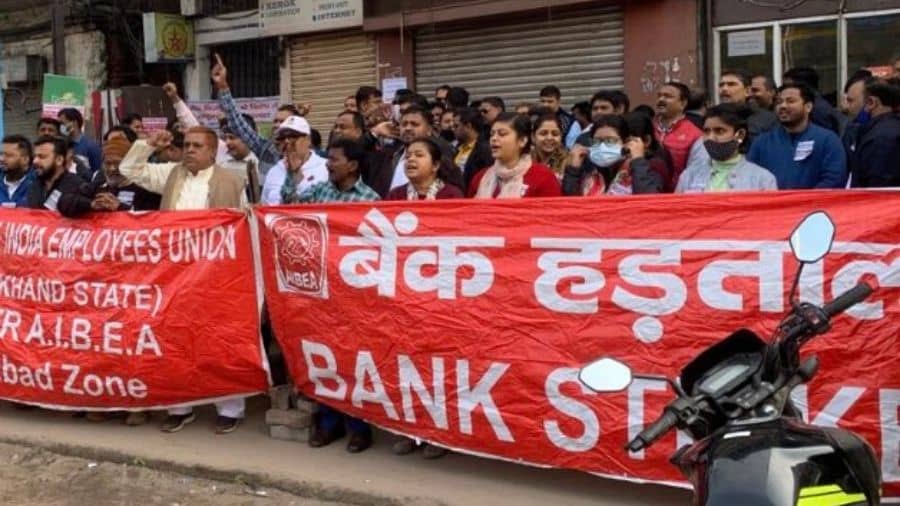 Public sector lenders, including State Bank of India, had informed customers that services in their branches might be affected due to the strike.
Twitter
Our Bureau, PTI   |   New Delhi   |   Published 17.12.21, 10:37 AM

Lakhs of employees of public sector banks continued their strike on the second day on Friday as well to protest against proposed privatisation of banks by the government impacting normal operation across the country.

Shutters of branches across many parts of the country on Friday were down following the strike call given by the United Forum of Bank Union (UFBU), an umbrella body of nine bank unions including All India Bank Officers' Confederation (AIBOC), All India Bank Employees Association (AIBEA) and National Organisation of Bank Workers (NOBW).

As a result, services such as deposits and withdrawal at branches, cheque clearance and loan approvals remains paralaysed due to the two-day strike ending later in the day.

Public sector lenders, including State Bank of India, had informed customers that services in their branches might be affected due to the strike.

The strike is against the government's decision to privatise public sector banks which have been playing a vital role in nation building, (AIBEA) general secretary C H Venkatachalam said.

AIBOC General Secretary Soumya Dutta said that about 7 lakh across the country are participating in the two-day strike.

In the Union Budget presented in February, Finance Minister Nirmala Sitharaman had announced the privatisation of two public sector banks (PSBs) as part of its disinvestment plan.

To facilitate privatisation, the government has listed the Banking Laws (Amendment) Bill, 2021, for introduction and passage during the current session of Parliament.

The government has already privatised IDBI Bank by selling its majority stake in the lender to LIC in 2019 and merged 14 public sector banks in the past four years.