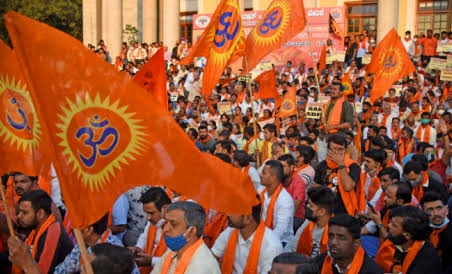 The Bajrang Dal staged protests across the country against recent incidents of violence over remarks on Prophet Mohammad and demanded a probe by the National Investigation Agency (NIA) into them, the Vishva Hindu Parishad (VHP) said on Thursday.

In a memorandum to President Ram Nath Kovind submitted through the administrative heads of districts, the Bajrang Dal activists also demanded that all those who indulged in violence on June 3 and June 10 after Friday prayers be identified and "exemplary action" be taken against them under the National Security Act (NSA), the RSS-affiliate said in a statement.

They demanded that those who instigated the mob and incited violence should also be identified and booked under the NSA, and adequate security be ensured in the areas "where Hindus are in minority", the statement added.

"Bajrang Dal activists staged dharnas across the country and submitted a memorandum to the President through the respective administrative heads of the district headquarters, making a host of demands," the VHP said.

"In their memorandum to the President, Bajarang Dal activists demanded that intentions of the mobs which spilled out on to the streets with 'satanic' mindset from mosques and madarsas be investigated by the NIA," it added.

They demanded that the those delivering hate speeches to poison the minds of the people against India should be identified and strict action be taken against them, the VHP said.

The Bajrang Dal protesters also demanded that organisations such as the Popular Front of India (PFI) and the Tablighi Jamaat be proscribed immediately.

In Jammu and Kashmir, Bajrang Dal activists held protest against the June 3 and June 10 violence in parts of the country and blocked the Jammu-Rajouri national highway in Sunderbani for nearly two hours.

Addressing the the protesters in Sunderbani, VHP working president Alok Kumar said, "The India of 2022 is different and the historic wrongs will be set right in accordance with the Constitution and the law of the land."

"Bulldozers were sent to know the address of those behind last Friday's violence and many of them were arrested and will be fined for the damage caused by them. The Indian government is strong enough to maintain law and order, he said, claiming that the VHP and the Bajrang Dal only act in self-defence for the safety of Hindus.

The VHP leader said the Hindus are going to get back the places of their worship in both Kashi (Varanasi) and Mathura through the legal course.

The birth place of Ram was returned and so will be our sacred places in both Kashi and Mathura as Shivji is in a hurry. Some people like (All India Majlis-e-Ittehadul Muslimeen chief Assaduddin) Owaisi has a problem, otherwise the Muslim community is largely concerned only for their bread and butter and do not believe in rioting, he said.

In Delhi, the VHP and its youth wing Bajrang Dal staged demonstrations in protest against the recent violence in parts of the country over the controversial remarks on Prophet Mohammad by two now-removed BJP functionaries.

The VHP said the demonstrations have been held outside at least 10 sub-divisional magistrate (SDM) offices in the national capital.