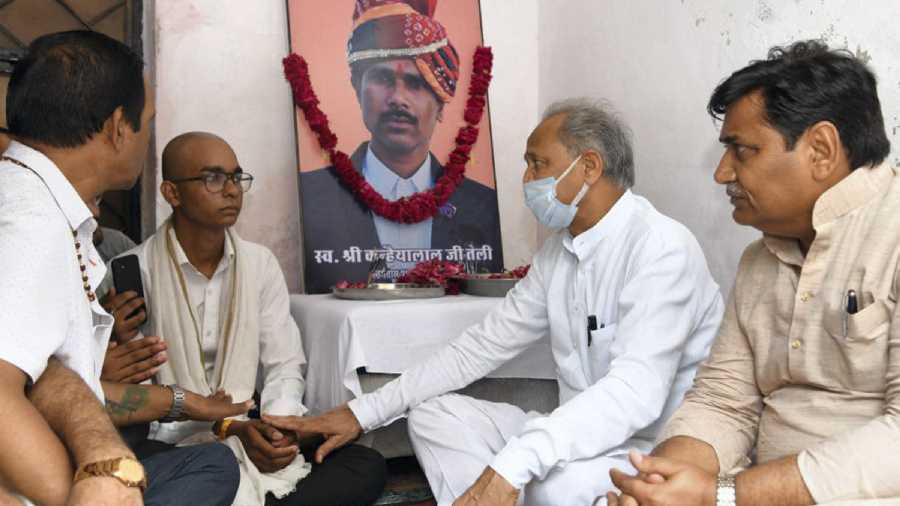 The chief minister spoke to the family members and relatives of Lal.

"The National Investigation Agency (NIA) should take up this case in a fast track court. The charge sheet should be filed as soon as possible so that punishment can be awarded," Gehlot told reporters after meeting Lal's family members in Udaipur.

Lal, a tailor, was on Tuesday killed by two men who had posted videos online that said they were avenging an insult to Islam.

The incident triggered stray cases of violence in Udaipur and curfew was clamped in seven police station areas of the city.

Lal was cremated on Wednesday in the presence of a large number of people.

Gehlot said those who killed Lal made a video on their own and thus they themselves have became eyewitnesses.

"The way the incident has happened, it has shaken the country. The accused were caught and the police and Special Operations Group (SOG) did a good job," he said.

The CM said the NIA has taken up the case and the SOG of the state police will cooperate with the probe agency.

Asked about the failure of the police in providing security to Kanhaiya Lal despite his complainant, the CM said it will become clear in the NIA investigation whether there was any failure on part of the local police.

Meanwhile, heavy deployment of police was made in Udaipur to maintain law and order and two Additional Director General, one Deputy IG and other senior officials are camping in the city to monitor the situation, officials said.

Thousands of people on Thursday took part in a protest rally here against the gruesome murder of Lal.

The 'Sarv Hindu Samaj' rally was called by Hindu organisations and was held peacefully from the Town Hall to the collectorate with permission of the district administration.