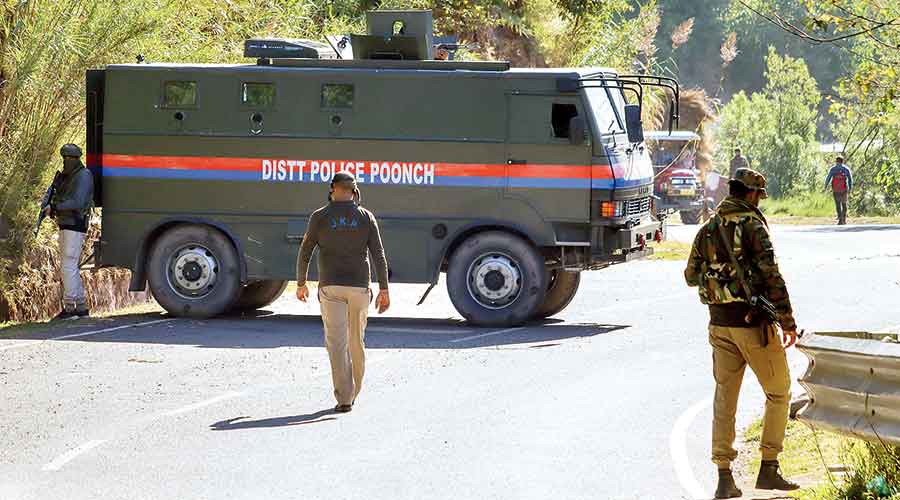 Security personnel stand guard at the encounter site at Bhatadurian in Poonch district on Friday.
PTI
Our Special Correspondent   |   Srinagar   |   Published 16.10.21, 01:07 AM

Two more soldiers have lost their lives in the five-day-long anti-militancy operation in Jammu’s Pir Panjal area, taking the army casualties to seven and making it one of the deadliest operations in a long time.

The army on Friday said it lost two riflemen overnight in the operation that began on Monday morning after reports that some militants were hiding in the area.

Official sources said militants had succeeded in inflicting heavy casualties on the security forces by taking advantage of thick foliage.

Hundreds of security personnel have been scanning a vast forest area spreading over Poonch and Rajouri districts for the past few days without success.

Officials said two soldiers were injured on Thursday night. There was confusion over their identities as the bodies could not be retrieved.

The army initially said a junior commissioned officer and a rifleman were killed but later identified the deceased as riflemen Negi and Singh.

“Rifleman Vikram Singh Negi and rifleman Yogambar Singh displayed exemplary courage, devotion and made the supreme sacrifice in the line of duty. The nation will always remain indebted to these bravehearts for their supreme sacrifice for the nation,” the spokesman said

Negi was from Tehri Garhwal district’s Viman village while Singh was from Chamoli’s Sankari village.

Police sources said a junior commissioned officer was still missing but the army did not confirm or deny this.

“The junior commissioned officer was presumed dead initially but he is missing. Massive searches are on to trace him,” a source said.

The army believes the militants who killed the two soldiers on Thursday night were the same who murdered five troopers on Monday.

“The two jawans were killed in Nar Khas area last (Thursday) evening which is several kilometres from Chamrer where we lost five men on Monday. The militants have been shuttling from one place to another,” an officer said.

The casualties in the five-day operation are the heaviest since the May 2020 operation in Kashmir’s Handwara where five army personnel, including a colonel and a major, were killed.

The authorities have blocked the road leading to Poonch from Jammu to prevent the militants from escaping.

Jammu’s Rajouri and Poonch districts, also called Pir Panjal, are back on militants’ radar after nearly two decades of relative calm. There have been half a dozen encounters in the region this year.

The increasing gunfights suggest Pakistan has stepped up infiltration in Jammu and Kashmir after the takeover of Afghanistan by the Taliban.