National Security Guard snipers, elite Special Weapons and Tactics (SWAT) commandos were part of the arrangements in view of the terror attack threats 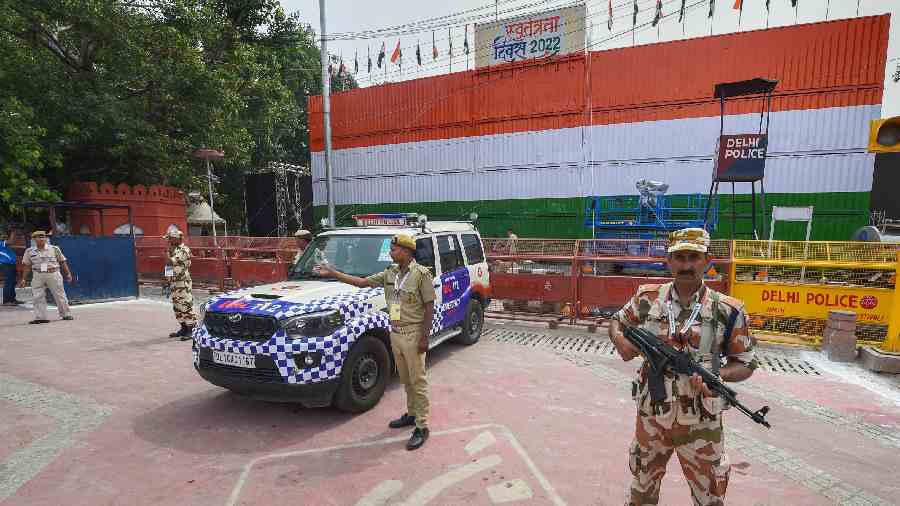 From facial recognition system cameras to multi-layered security cover, robust arrangements were in place in and around the historic Red Fort from where Prime Minister Narendra Modi addressed the nation as India celebrated its 75th Independence Day on Monday.

National Security Guard (NSG) snipers, elite Special Weapons and Tactics (SWAT) commandos, 400 kite catchers, canine units and sharpshooters on buildings were part of the airtight security arrangements in place in view of the terror attack threats ahead of the Independence Day celebrations. Further, a five-kilometre area around the Red Fort was marked as a "no kite flying zone" till the tricolour was hoisted.

Addressing citizens for the ninth consecutive time from the ramparts of the Red Fort after hoisting the tricolour, Modi, 71, urged citizens to take five pledges for the next 25 years, making India a developed nation, removing every trace of bondage, taking pride in the country's heritage, developing unity and fulfilling their duties.

With Covid cases on the rise in the national capital, special measures were taken at the Red Fort to ensure that the 7,000 invitees followed COVID-19 protocols.

Body temperature of every attendee was checked at the entry point and a two-feet distance of between seats was maintained. Masks and sanitisers were also distributed among the attendees.

Forces continue to remain on high alert to thwart any untoward incident as police have intensified patrolling and deployed extra pickets at vital installations based on intelligence inputs received from central agencies, a senior police officer said.

Borders were sealed to ensure no untoward incident took place in the national capital even as police warned of strict action against anyone trying to disrupt the law and order situation.

Dependra Pathak, Special Commissioner of Police (Law and Order) had on Friday said provisions of Section 144 were instituted in the capital.Anti-drone systems from Defence Research and Development Organisation and other security agencies remain installed, he said.

During Modi's Independence Day address in 2017, a kite had landed just below the podium. The prime minister had, however, continued with his address unfazed.

The police had on July 22 issued an order prohibiting the flying of aerial objects such as paragliders, hang gliders and hot air balloons, and this will remain in force till August 16, police said.

Around 1,000 high-specification cameras were installed in the North, Central and New Delhi district units to contain aerial objects. These cameras helped in monitoring the VVIP route to the Red Fort, they said.

Parking facilities will remain unavailable at the Delhi Metro stations until 2 pm. The Metro train services, however, continue to run as per the schedule.