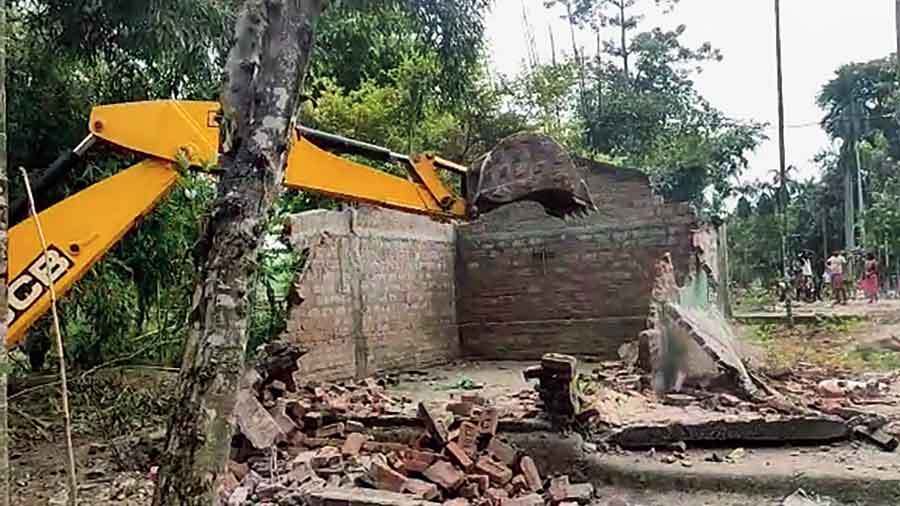 PUCL Ranchi general secretary Shashi Sagar Verma has written to chief secretary Sukhdev Singh on Wednesday informing him about the demolition of 40 houses in the Lohra Kocha Basti (an urban slum) near Kadru Overbridge on December 28
Representational picture
Animesh Bisoee   |   Jamshedpur   |   Published 21.01.23, 03:10 AM

Human rights outfit, People’s Union for Civil Liberties (PUCL) Jharkhand unit, has petitioned state chief secretary for rehabilitation and compensation of occupants whose houses were “demolished by Ranchi railway” last month, rendering most of them homeless in the extreme winter.

PUCL Ranchi general secretary Shashi Sagar Verma has written to chief secretary Sukhdev Singh on Wednesday informing him about the demolition of 40 houses in the Lohra Kocha Basti (an urban slum) near Kadru Overbridge on December 28.

“A team of 22 RPF personnel from the Ranchi railway division of South Eastern Railways demolished around 40 houses in Lohra Kocha Basti. It is pertinent to note that the residents of these 40 households, the majority of them belong to Scheduled Tribes and Other Backward Classes. The affected population are daily wage earners and since the demolition, many of them have not been able to go back to work and have been rendered homeless,” the letter states.

The letter also informs that the occupants had been staying in the urban slum for close to six decades.

“The occupants of the locality have their ration card, Aadhaar card and other government documents made on the address of the now demolished residence.

“The said assurance created a legitimate expectation to not approach the authority or courts to prevent the demolition before they are properly rehabilitated,” the letter adds.

It further informs that members from the PUCL, Ranchi along with the affected family members had even visited the office of the deputy commissioner, Ranchi and submitted a representation earlier this month.

“However, it’s painful that till date many of the families are spending nights in makeshift tents at the demolition site. The situation demands immediate intervention. The recent demolition of the houses has brought undue hardships to the occupants especially in the harsh winter months without providing any reasonable alternative for the same,” the letter stresses.

The letter cites the Supreme Court verdict in Olga Tellis vs Bombay Municipal Corporation and State of Karnataka and others versus Narasimhamurthy and Others.

“The Supreme Court has time and again clarified that the right to life includes the right to shelter. Further, the principle followed in any welfare state is — ‘First rehabilitate and then displace’, which has been outrightly not followed in the recent demolition,” the letter points out.

The letter demands that ongoing demolition drives be stopped till the affected communities are properly rehabilitated and the places where demolition has already occurred the affected families should be provided with a decent shelter with proper sanitation facilities and safety for women, blankets and other facilities needed to combat the winter months.