A ‘prayog’ against polarisation

A credible regional dare to Modi can hold ground 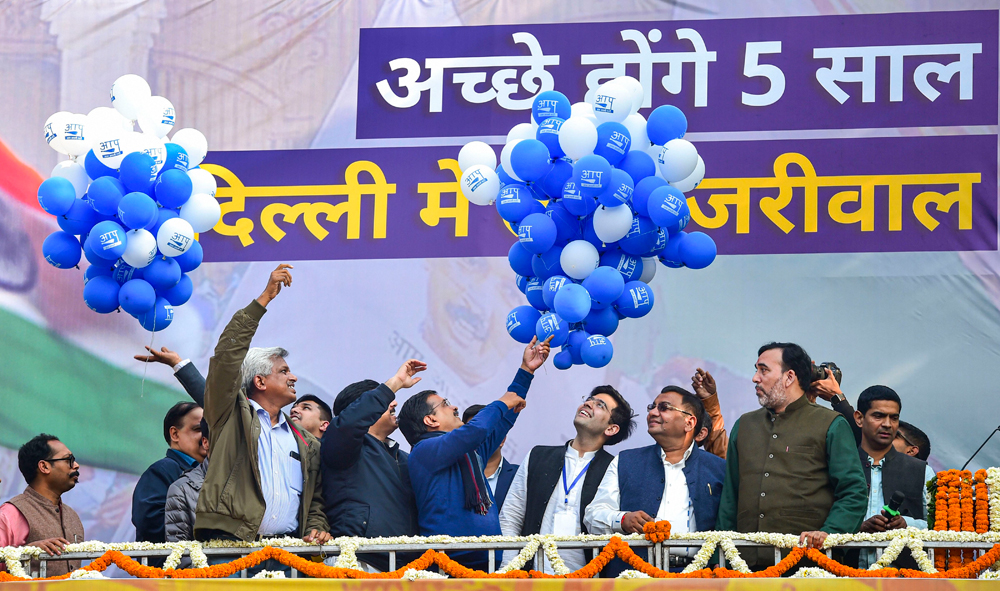 Twice in successive Lok Sabha and Assembly rounds, Delhi has voted with instructive schizophrenia, endorsing Narendra Modi unreservedly at the Centre, effusively rejecting him in favour of Arvind Kejriwal for the state.

The number of those who vote bigamously depending on the election must remain astoundingly high.

Tuesday’s resounding verdict for the AAP suggests that while Modi remains unchallenged by party or person nationally, a credible regional dare to him can hold ground. And handsomely, as Kejriwal’s second sweep of Delhi demonstrates.

It probably also suggests, not for the first time, that an established governance record, tempered with the right political strategy, can defeat the most blatant and belligerent attempts to polarise the electorate and extract majoritarian victories.

This is how the first electoral shock was delivered to Modi post his 2014 steamroll — working to strategies worked out by strategist Prashant Kishor, Nitish Kumar deftly joined hands with arch rival Lalu Prasad and punched Modi down in the 2015 Assembly elections.

Just as in Bihar in 2015, the BJP appeared desperate enough to grab Delhi to resort to the ugliest tricks in the book; its campaign was littered with personal slander against opponents, unembarrassed attempts to communalise the campaign, bellicose intimidation of the minorities who were, through the canvassing, also the lead act of the anti-CAA protests in various parts of this city.

Okhla’s Shaheen Bagh, where ladies have led a defiant picket for close to two months now, became the central metaphor of the BJP’s campaign, an omnibus code-word for pinioning the minorities as troublemakers, anti-nationals and card-carriers of Pakistan.

Amit Shah exhorted Delhi to vote with a vehemence that would send electric currents to Shaheen Bagh. Modi warned ominously that Shaheen Bagh was an “experiment, not a coincidence” — “sanyog nahin, prayog hai”.

The shrill “goli maaro saalon ko” cry resounded from many a BJP stage. Kejriwal was labelled a terrorist and the battle for Delhi itself was projected by some BJP leaders as a battle between India and Pakistan.

Delhi spurned that. The biggest victory the AAP recorded was on the Shaheen Bagh seat. But that only tells part of the story of how the BJP’s bid to polarise the vote has failed. Handier proof is probably this: the Muslim population of Delhi is shy of 13 per cent; the AAP’s total vote share was nearly 54 per cent, the BJP scored 38 and a few decimal per cent.

But there is another way of looking at this. The Congress has lost more than half of its 2015 vote share; the BJP has gained, most likely at the Congress’s expense.

The exhilaration in the AAP camp, and the fervid felicitation of Kejriwal from the likes of Mamata Banerjee, Chandrababu Naidu, Jagan Mohan Reddy, Hemant Soren, M.K. Stalin, Akhilesh Yadav and Tejashwi Yadav might suggest that the non-BJP, non-Congress parties are probably drawing a fresh breath of hope from how Delhi has voted. But there is very little to suggest that the AAP’s victory can be interpreted as a sign of a larger political shift.

The Congress, drastically reduced but yet the only Opposition party with a national footprint, is leaderless and directionless. It lacks a narrative, it makes no pretence of working on one. Today, it was left trying to derive solace from the defeat of the BJP’s divisive campaign, but it is not the party that was even able to play a minimal role in that. Strong regional groups are unable to agree on an umbrella under which they can gather with common purposes; each is busy trying to survive in its bastion.

Bihar, which is the next big stage for electoral duelling, itself offers reasons why the opposition to Modi and his BJP should remain wary of over-reading the meaning of its victories.

The Nitish-led Mahagathbandhan’s victory in Bihar had held out hope for a wider formation that could credibly take on Modi. But it was short-lived; the BJP was able to lure Nitish away from Lalu Prasad and now dominates the course of the coalition in the state.

Modi has suffered reverses in many states since he came to the helm in 2014, most famously at the hands of the Congress in Chhattisgarh, Madhya Pradesh and Rajasthan just months ahead of the 2019 election. But when Modi himself came onto the poll ticket as prime ministerial candidate, he faced no competition.

As one Congress leader said privately as he watched his party washed out a second time and the AAP cadres exhort Kejriwal to higher ambitions with cries of “PM! PM!” at his victory appearance: “Kejriwal himself would do well to remember what happened when he tried to expand his footprint the last time. He quickly became wise to the idea that he better stick to Delhi.”

But who’s to prevent a renewal of wider ambitions on the anvil of such a spectacular victory? Especially with the likes of Prashant Kishor juggling away with the poll Rubik in the backrooms.

His recent ouster from Nitish’s JDU notwithstanding, Kishor remains a strategist at play with envious cross-connections and influences. He began to work for Kejriwal a few months ahead of the elections. He has been micro-managing strategy for Mamata Banerjee. He plotted Jagan Reddy’s march to power in Andhra and remains in close touch. He has active links with the ruling family of Maharashtra, the Thackerays. He remains fired by the imagination of fashioning a political alternative to the Modi-Shah project.

As the AAP celebrates, Kishor would most likely have moved to mulling what next.