The German giants are unbeaten in 2020, winning 24 of their last 25 matches in all competitions 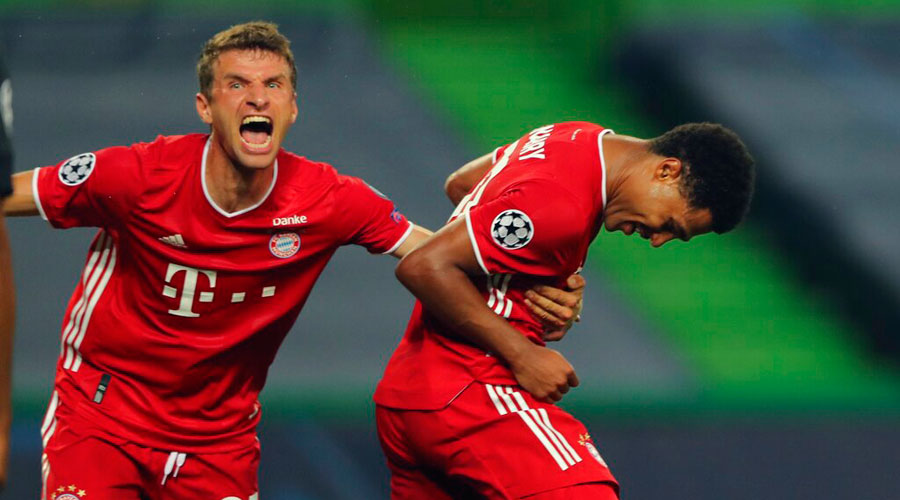 Bayern's Serge Gnabry (right) celebrates his side's second goal with his teammate Thomas Mueller during the Champions League semifinal against Lyon in Lisbon on Wednesday.
AP
Agencies   |   Lisbon   |   Published 21.08.20, 03:42 AM

Bayern Munich powered into the Champions League final, where they will face Paris Saint-Germain, as two goals from Serge Gnabry led them to an emphatic 3-0 win over Olympique Lyonnais on Wednesday.

Robert Lewandowski added the third goal for his 55th of the season to keep Bayern on course to add the Champions League title to their Bundesliga and German Cup triumphs.

Bayern will bid for their sixth European Cup crown when they come up against Neymar and Kylian Mbappe on Sunday. After convincingly beating Chelsea, Barcelona and now Lyon, Hansi Flick’s side will surely start as favourites.

The German giants are unbeaten in 2020, winning 24 of their last 25 matches in all competitions and they have won every Champions League game this season.

No team has ever won the Champions League with a 100 per cent record, but PSG’s powerful attack should make for an entertaining contest.

“Paris are a good team. For now we celebrate a little bit but afterwards we focus on the next game,” said Bayern’s Canadian left back Alphonso Davies.

“We really want to win the final. That will be the deciding factor, we will give our all to win the treble,” German winger Gnabry said. “Lyon put a lot of pressure on us,” he admitted. “They were very aggressive, they didn’t give us many chances early.

“You can’t defend against everything, but all in all we were very strong.”

PSG will take hope from the early chances that Lyon created — Memphis Depay found space behind the Bayern defence but, forced wide, he could only shoot into the side-netting.

Flick said Bayern needed a bit of luck and the quality of Gnabry to survive early pressure. “It was an intense game and we knew it would be like that,” Flick said. “Lyon had a great performance, pressured us and we survived it with a bit of luck, especially at the start.”