Malayalam-film Virus shows how a film can be an investigative thriller, a human drama and a gritty account of medical professionals dealing with real-life crisis 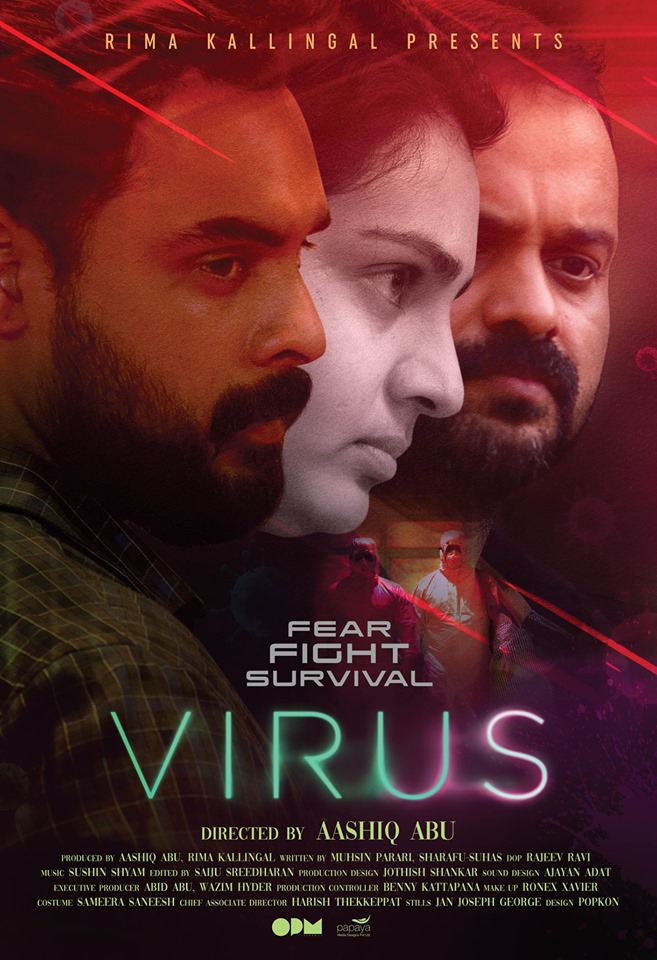 In dramatizing the Nipah virus outbreak in Kerala, Virus tells a multi-pronged story involving many sets of characters
Poster of the film
Jai Arjun Singh   |   Published 12.08.19, 07:51 AM

The opening scenes of Virus are reminders that hospitals can, at one and the same time, be dramatic and humdrum spaces. A busy early sequence is set in the Emergency ward at a Kozhikode hospital, with our entry point being a young doctor named Abid (Sreenath Basi) who is diligently doing his work, moving from one patient to the next, dividing his attention between relatively routine cases and fatal-accident victims. We know Abid is distracted by a personal matter (his girlfriend has just sent him a message saying she is getting married; he has asked another junior doctor to cover for him for an hour) and we see the concern on his face – but as he enters his work-space the professional conditioning takes over and he is swept into the pace of things.

This lays the ground for the film’s shifting between the ground-level picture and the bird’s-eye one, and also – by depicting daily chaos – prepares us for how much more is to come: how hard it will be to identify the nature and extent of an illness no one knows much about. One of the film’s most chilling scenes is a simple montage of doctors and nurses looking up Nipah on their phones.

As Virus expands its canvas, the precise, tight screenplay (by Muhsin Parari), the pulsating music score (by Sushin Shyam) and Rajeev Ravi’s probing camerawork combine to fine effect. There is also a line of excellent performances – notably by Parvathy Thiruvothu (a big name in Malayalam cinema but most familiar to Hindi-film viewers for her lead role in Qarib Qarib Single) as Dr Anu, an initially unobtrusive and reticent worker ant who becomes a key part of the story, her research uncovering possibilities that might not otherwise have seen the light of day.

The first time we see Anu, she too is preoccupied; asked to show someone to a building, she begs off and says she is in a hurry. But her role grows, and it is largely through her efforts that we see just how tricky the investigation into the virus’s trajectory must have been.Hospital ward tickets must be collected, and CCTV footage scrutinised, to check the time at which patients and their relatives were in a particular space, in proximity of the virus’s “index patient”, and thus at risk of contamination themselves. The travel paths of two unrelated patients are mapped to see if they might have encountered each other at some earlier point (as opposed to a scarier possibility: that there were discrete outbreaks – or even that this is a new sort of terror attack).

Virus is available on Amazon Prime

Informed conjectures must be made: about how a patient’s aunt may have been infected when she leant over his stretcher and blew on his face after reciting holy verses; or what might have happened when a policeman conducted an informal “breathalyser” test by asking a drunk driver to exhale in his direction. Subtle links are made between morality and infection too: could one Nipah victim have been infected as a result of the illegal game-hunting he indulged in?

Virus can certainly be seen as a testament to the medical profession, but it isn’t a blanket glorification (as Delhi Crime was accused of being for the police). A personal aside here: having spent plenty of time in hospitals as a caregiver in the past decade, dealing with many varieties of stressful situations, I have had much experience of medical apathy, incompetence or insensitivity. Given these experiences, my antennae would vibrate hard at any film that made an overt effort to whitewash or extol the profession. But I thought there was an even-handedness in Virus, a pragmatic understanding of the difficulties of healthcare systems in a country like ours, and the toll it can take on personal lives.

One of the film’s important characters is Nurse Akhila, based on the real-life Lini Puthussery, who died in the call of duty and has been hailed as a martyr. It would be natural for a film about the Nipah virus to deify her as a tireless angel of mercy, but even here we get a brief flashback scene where Akhila – looking worn out and distracted by her work – takes a quick break to speak with her husband, while a patient’s relative shouts at her to get off the phone and attend to something urgent.

But ifVirus is about human beings and their interrelationships, it is also generous and expansive enough to touch on the connectedness of life beyond humans. It ends with a beautiful, almost mystical scene – a sort of coda, cut off from the main narrative – involving a baby bat that has fallen off its tree. Even though the closing shot is of one of the creatures that transmitted the Nipah virus, this creature is presented here as a helpless little thing – as capable of inviting human compassion (and holding a mirror to the best qualities of our species) as it is of inadvertently causing us harm. It’s a fitting end to a graceful film about our many flaws and vulnerabilities as well as our capacity for healing and caring.

Indian cinema hasn’t had a robust tradition of the procedural film, which closely follows a group of professionals as they deal with a specific challenge in their field: various threads slowly converging, order emerging from chaos. Such films can be built around a single, concentrated incident that takes just a few hours to unfold – templates include the many ensemble-cast disaster movies that Hollywood made in the 1970s, such as Airport or The Towering Inferno or Meteor, where aviation experts, firefighters, architects or NASA engineers stare down a crisis.

Or it could be that the prime cause is urgent, but its handling has to be measured, involving not instant heroics but persistent work over weeks or months; newsroom films like Spotlight or All the President’s Men usually fit the bill, as does something like the upcoming Mission Mangal, about ISRO’s Mars Mission.

Some settings and genres are innately conducive to action, suspense, or exciting twists: in recent years we have had espionage or crime films such as Neeraj Pandey’s Baby (about a task force dealing with terrorist threats) and the police procedural web series Delhi Crime (about cops investigating the Nirbhaya gang-rape/murder and coping with public outcry). But what when an environment that is relatively mundane in its day-to-day functioning suddenly faces an unanticipated problem? A medical setting, say, where doctors, hospital workers, health ministers find themselves running around like headless chickens. Where the “bad guy” is an obscure infection and a hard-to-trace set of circumstances that aid its spread.

It takes a special film to depict this situation “realistically” while also playing like a riveting, connect-the-dots thriller, and Aashiq Abu’s Virus is one of the best films I have seen this year. In dramatizing the Nipah virus outbreak in Kerala, it tells a multi-pronged story involving many sets of characters and captures the detached efficiency required by medical professionals – while also giving us insights into their emotional lives and never losing sight of the human stakes involved. It is about not just an outbreak in one part of the country, but also the many ways in which a society might get contaminated, about how an epidemic might play out in a disorganised, overpopulated milieu. 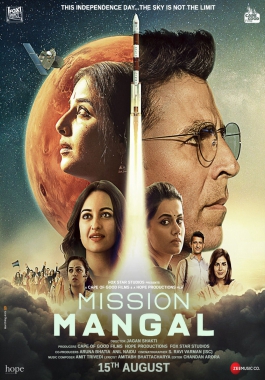 The upcoming Mission Mangal, about ISRO’s Mars Mission
A poster of the film