Advertisement
Home / Entertainment / Judgementall Hai Kya: The many ways of being 'paagal'

Judgementall Hai Kya is a wild, kinetic work that does a fine job of finding visual and aural expression for its protagonist’s cluttered inner world; the shifts between reality and fantasy 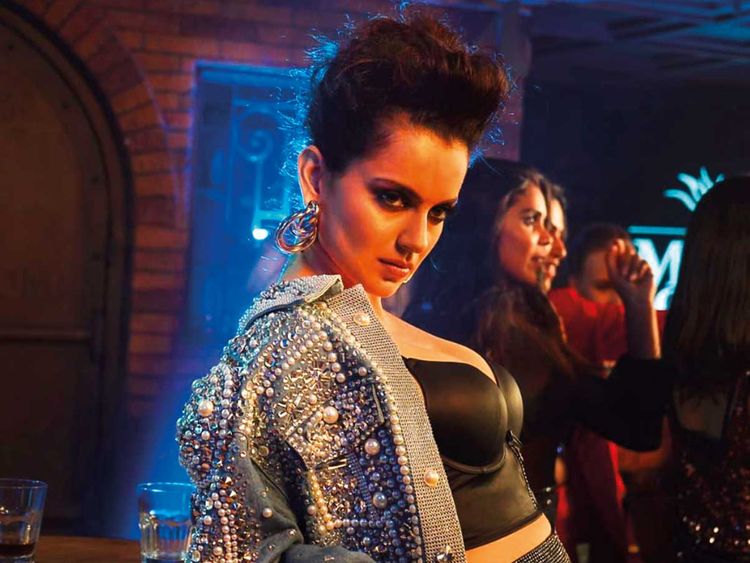 Bobby is played by an actor (Kangana Ranaut) who specialises in off-kilter or eccentric characters and whose real-life behaviour in recent times has been (to put it politely) strange
Still from the film Judgementall Hai Kya
Jai Arjun Singh   |   Published 29.07.19, 10:15 AM

My first thought after watching the wacky and hard-to-classify new film Judgementall Hai Kya, about the psychosis-afflicted Bobby (Kangana Ranaut) and her obsession with Keshav (Rajkummar Rao), whom she suspects of murder: is this a turbocharged, hyper-feminist 2019 version of Gaslight?Where, even if the woman really IS stark raving mad (as opposed to being manipulated into thinking she is), they have to find a way to make the man even worse?

Or is this a Crouching Sita, Hidden Ravana story where we end up rooting for Sita even though we know she is unstable – and where we don’t know for sure until the film’s last ten minutes whether “Ravana” even exists outside her head? That isn’t a random reference, by the way. The film has an important Ramayana connection – Bobby finds herself working in a stage production of the epic – and some striking imagery such as ten reflections of a character seen in a hall of mirrors.

But to rewind a bit: gaslighting – which broadly means exercising power over someone by making them doubt their own sanity – derives from the Patrick Hamilton play Gas Light and its film adaptations (most famously the 1944 one for which Ingrid Bergman won an Oscar), and has often been used in recent times to describe male hegemony over women. The term is now part of an increased sensitisation about how women were historically branded as unstable or irrational or (to use a word that tellingly derives from the Greek for uterus) hysterical, in order to keep them “in their place”.

However, there is one obvious difference between Judgementall Hai Kya and Gaslight, or between Judgementall Hai Kya and the many other stories where vulnerable women are preyed on: Bobby really does have a serious mental ailment, and the film – through its form and through Kangana Ranaut’s performance – leaves this in no doubt. We see the childhood trauma that triggered her condition (or worsened something that was already latent), then we see what she is like as an adult: out of step with reality, functioning normally only for phases, heavily reliant on medication that she doesn’t want to take, seeing roaches that no one else can see – warning signs that her condition is deteriorating. We also see her fixating on Keshav, her new neighbour, which might well give her a motive to kill his wife.

And so, in comparison, Bobby looks like a harmless flake with a few endearing behavioural quirks at the film’s end. We as viewers are required to reassess the prejudices we formed about her over the course of the story. I think a second viewing of Judgementall Hai Kya might make it easier to see the many little ways in which Bobby (despite her obstinacy about not taking her medicines) is making some sort of effort to get well, to not tip too far over the edge: looking for the pesticides that will weed out the insects in her mind; finding focus in moments of real crisis.

Can the ending be seen as a sly comment on the difference between “male” and “female” manifestations of madness – and how, when these two things come in conflict, it is the former that gets a free pass in a patriarchal society, even when it is more dangerous? Not on the surface, but I think it is a subtext.

To even mention such things is to make this film sound solemn or pedantic, whereas one of the pleasures of watching it is that it doesn’t seem at all bothered with deep themes. Even if there are buried ideas here about how female “hysteria” may be less destructive than male aggression – and how women’s intuition, like the voices Bobby says come from her stomach, is sometimes dismissed as madness – the film doesn’t brandish them: it is happy being a fast-paced thriller-cum-black-comedy. And, rarely for a Hindi film, it sustains its non-didactic tone even over the course of a dramatic, revelatory climax where lives are at stake.

The one idea I wish had been explored a little more is that of shared psychosis, or folie à deux – especially given the nature of the central murder, where one character begins the job (albeit without conscious intent to kill) and another character finishes it. This could have led to a more amoral film, a Raman Raghavan 3, a Natural Born Killers 2. A story that explores how men and women, by being gloriously insane together, can reshape the world in unexpected ways.

What we get instead is an ending that restores some order, draws a reasonably clear line between Good and Bad, and celebrates the power of women – and this is fine too, especially since it is done without speech-making. Ultimately, despite the moments of genuine nastiness it delivers in its final act, Judgementall Hai Kya is a surprisingly warm film about the many ways of being (as doctors in movies of an earlier, less politically correct time would say)“paagal”.

From here on, nearly every incident can be interpreted in different ways, and the film’s impact as a thriller hinges on our knowledge that Bobby is an unreliable protagonist. How far gone is she? How far will she go to get what she wants? Are there moments of clarity, and if so, can her judgement or perception be trusted in certain situations?

Judgementall Hai Kya is a wild, kinetic work that does a fine job of finding visual and aural expression for Bobby’s cluttered inner world: the breaking down of the wall between her own life and the movies she lends her voice to (as a dubbing artiste); the shifts between reality and fantasy. Kanika Dhillon’s writing and Pankaj Kumar’s camerawork complement each other well in delineating this fractured state of mind, as do some of the musical choices (you’ll never hear Mr Natwarlal’s “TaubaTauba” the same way again). There are surreal touches that feel organic to her condition: for instance, a Hanuman who shows up to counsel her late in the film wields a mace made up of cans and other junk that would be available in London, where all this happens (and where a futuristic version of the Ramayana is being staged).

But what’s most interesting (and here’s where spoilers begin) is this. Even though we are in the company of an unhinged protagonist who cannot be taken at face value; and Bobby is played by an actor who specialises in off-kilter or eccentric characters and whose real-life behaviour in recent times has been (to put it politely) strange – despite this, in the final stretch, we get confirmation that there is someone else who is even more“mental”. And this someone is a man who, unlike Bobby, isn’t tormented by any self-doubt or uncertainty, and is comfortable in his own skin (or many skins) in a way that she isn’t allowed to be. Someone whose childhood the film also shows us glimpses of – as we saw Bobby’s childhood earlier – but who was never an innocent in the way that she was. Someone born to the manor of psychopathy, not shaped by circumstances.

Bobby really does have a serious mental ailment, and the film – through its form and through Kangana Ranaut’s performance – leaves this in no doubt
Still from the film Judgementall Hai Kya