Advertisement
Home / Entertainment / 'The Forgotten Army' on Amazon Prime Video, is far from flawless but an important story that needs to be told and retold

'The Forgotten Army' on Amazon Prime Video, is far from flawless but an important story that needs to be told and retold

Ambitious both in scale and story, the film is a worthy exercise in bringing the INA's heroes to the forefront 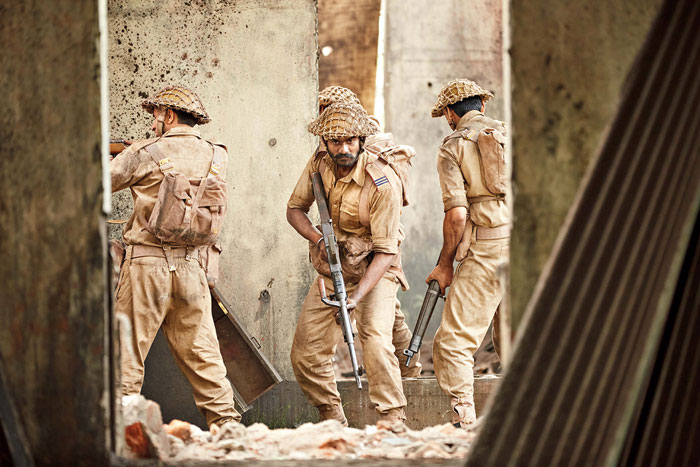 Kabir shoots the combat scenes compellingly but it’s The Forgotten Army’s emotional moments — the pangs of separation, the dreams of freedom, the futility of war, the angst of being a woman — that stay on with you
Still from the series
Priyanka Roy   |   Published 23.01.20, 06:51 PM

The Forgotten Army makes you think. How will those who fought till the last drop of blood and their final breath for the freedom of the India they dreamt of, react to the India we have today? How will those who united irrespective of caste and religion to wage a long battle for the country’s independence from the British reflect on an India increasingly being demarcated along sectarian lines? How will the men (and women) whose names we don’t even know look at an India where one’s name is now a political tool used strategically to divide and rule?

These are the people who fought selflessly, sacrificing their freedom and families, lives and loves, so that we live in a (relatively) free country today. These are the people that The Forgotten Army focuses on. The five-episode series that drops on Amazon Prime Video today, has filmmaker Kabir Khan taking the germ of his eponymously titled 1999 documentary and dramatising it to tell the story of the unsung heroes of the Indian National Army or the Azad Hind Fauj, a battalion of bravehearts who went above and beyond the call of duty to pledge their lives for their motherland.

Ambitious both in scale and story, The Forgotten Army is a worthy exercise in bringing these heroes to the forefront. Aided by a voiceover from Shah Rukh Khan, the series benefits from both its authentic milieu and its stirring performances, with Kabir — who has successfully meshed entertainment with message in films like Kabul Express and Bajrangi Bhaijaan — giving the show many a dramatic moment without losing grip on its real look and feel.

Unfolding in the winter of 1942 and chronicling the rise of the INA — specifically the Subhas Brigade and the Rani Jhansi Regiment — till 1945, The Forgotten Army talks about the lakhs of Indian soldiers in pre-Independence India who fought for the British Royal Army in World War II but whose bravery remains undocumented, not even finding a place in school textbooks.

The series follows a particular Indian regiment — led by Surinder Sodhi (Sunny Kaushal) — stationed on the fringes of Singapore, its primary duty being to stop the Japanese from taking over Singapore. The British had to face massive defeat at the hands of the Japanese — then prime minister Winston Churchill declared it “the worst disaster in British military history” — but thousands of Indian soldiers captured by the Japanese were given the option of joining the Azad Hind Fauj, headed by Subhas Chandra Bose.

Fuelled by the idea of a free India, the Azad Hind Fauj, supported by the Japanese both militarily and monetarily, went from strength to strength in the next few years, even going as far as to build the first female army regiment in the world. The retreat of the Japanese, a clampdown on its resources and apathy from the establishment meant that the Azad Hind Fauj was gradually reduced to a pipe dream, but it’s a fascinating piece of history that doesn’t deserve to be lost in the dusty annals.

The Forgotten Army, with each episode playing out between 30 and 45 minutes, shuttles between the ’40s and the ’90s, where an elderly Sodhi (M.K. Raina) retraces his footsteps to Singapore. A student unrest playing out in Burma — a zeitgeist of the times we live in — is paralleled with the struggles of the young Sodhi and his comrades, even as his love story with the spunky Maya (Sharvari Wagh) gives the series its endearing moments.

Kabir shoots the combat scenes compellingly, but it’s The Forgotten Army’s emotional moments — the pangs of separation, the dream of freedom, the futility of war, the angst of being a woman — that stay on with you. Aseem Mishra’s camerawork is the hero of the series, with Kabir using real-life footage effectively (a narrative device of flashbacking using newspaper articles is done well).

“Chalo Dilli” was the war cry that the Azad Hind Fauj lived and died by. The fire in the eyes of its soldiers — all of them ordinary men and women like you and me — give the show much of its heft. The going’s good as long as Kabir focuses on the trials and tribulations as well as the big and small victories of the Fauj, but he isn’t as sure-footed while telling the story set in the ’90s, the denouement coming off as both convoluted and contrived. But the performances are evenly good, with Sunny Kaushal pulling off both grit and vulnerability and Sharvari’s luminous presence lighting up the screen. A special word for Rohit Chaudhary as Sodhi’s comrade Arshad who owns the scenes he’s in.

The Forgotten Army may be far from flawless but is an important story that needs to be told and retold. For the men and women who gave up their lives so that we could live.

I liked/ didn’t like The Forgotten Army because... Tell t2@abp.in

Decoding Nationalism and Patriotism in 'The Forgotten Army' and '83