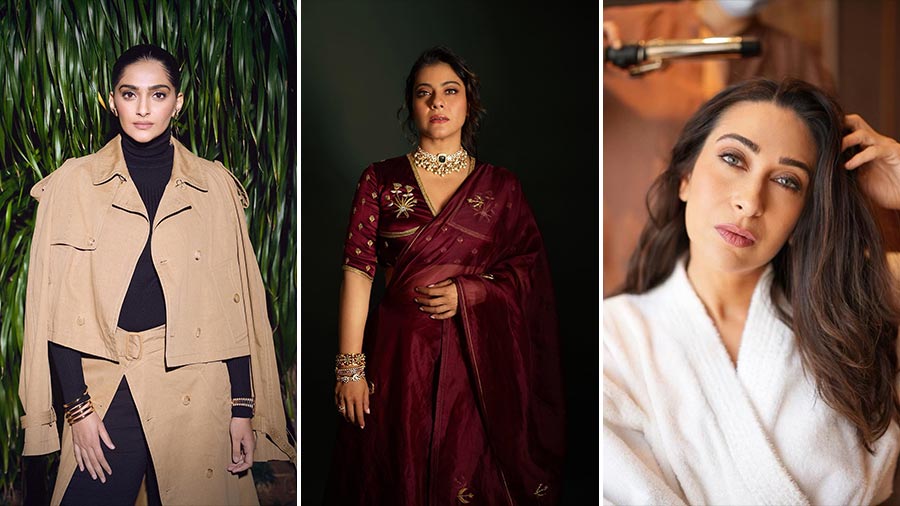 Sonam Kapoor’s first day out after her newborn son’s birth found her in a stylish beige coat-and-skirt look, paired with a black turtleneck, pants and minimal jewellery.

Kajol draped herself a stunning maroon chiffon sari with a golden embellished blouse. The 48-year-old actress also posed with her Salaam Venky co-star Vishal Jethwa, who plays the role of her son in the drama directed by Revathi.

Karisma Kapoor posted a golden-hour picture while getting her makeup and hair done.

An Action Hero co-stars Ayushmann Khurrana and Jaideep Ahlawat did their version of the Anti-Hero trend lip-syncing to the popular Taylor Swift song.

Zendaya posted a stunning photo of herself amidst the Abu Dhabi desert. The actress is currently shooting for Dune: Part 2.

Kriti Sanon visited her school — D.P.S. R.K. Puram — after 15 years to promote her upcoming film Bhediya, which will hit the theatres on November 25.

Timothee Chalamet shared a photo with his Bones and All co-star Taylor Russell.

Sobhita Dhulipala shared a throwback photo from the Ponniyin Selvan: I success party held in Chennai.

Soha Ali Khan’s Christmas festivities have begun with her daughter Inaaya decorating the Christmas tree and writing down a wishlist for Santa Claus.