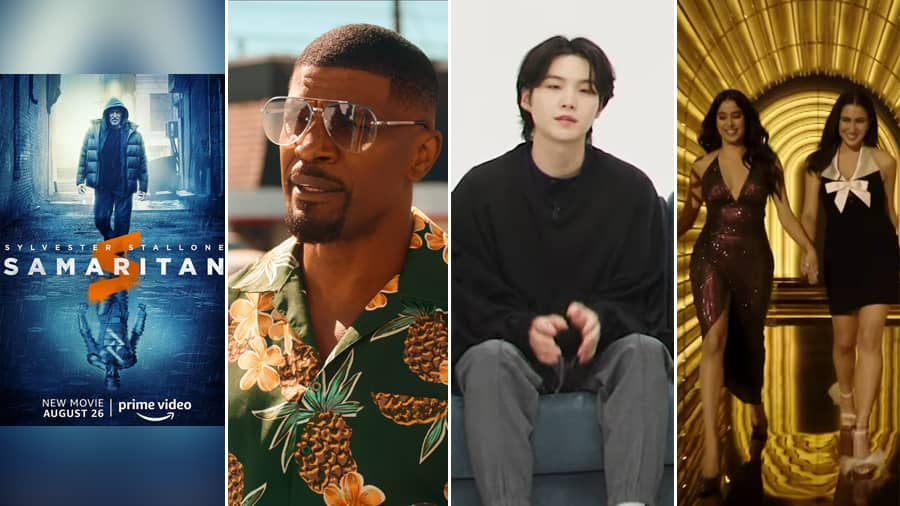 Netflix has released a trailer for an upcoming vampire action-comedy movie Day Shift starring Jamie Foxx, Dave Franco, and Snoop Dogg. The film stars Foxx as a blue-collar worker who is actually a vampire hunter belonging to a secret society called the ‘International Union of vampire hunters’.

The two-minute-51-second trailer shows Foxx’s character as a vampire hunter, Franco’s character as a rookie and Snoop Dogg as Foxx’s friend. The trailer promises this will be a bumpy ride with lots of humour and action on the way.

Stunt coordinator JJ Perry is making his directorial debut with this film. Day Shift will release on Netflix on August 12.

MGM Studios has released an official poster alongside photos from their upcoming action thriller Samaritan starring Hollywood icon Sylvester Stallone as a former superhero who has been off the radar for over two decades.

Stallone is also accompanied by Euphoria star Javon Walton and Natacha Karam of The Old Guard fame. Samaritan is directed by Julius Avery and the screenplay has been written by Bragi F. Scut.

The film will be available for streaming on August 26, exclusively on Prime Video.

The members of the band announced in a video shared by the streaming giants that they will be featuring in two shows on the platform. The titles revealed so far are headlined by BTS: Permission to Dance On Stage – LA, a 4K concert film featuring BTS’ live performance in Los Angeles’ Sofi Stadium in November 2021 and a Travel show In the Soop: Friendcation.

Karan Johar has shared a teaser for the second episode of Koffee with Karan season 7 featuring actors Janhvi Kapoor and Sara Ali Khan. The show’s latest season premiered last week, with an episode featuring Ranveer Singh and Alia Bhatt as the guests.

The filmmaker shared the teaser on his social media handles and wrote, “Two of my favourite girls at their unfiltered best!🥳 Get ready for episode 2 of #HotstarSpecials #KoffeeWithKaranS7 streaming from July 14 on Disney+ Hotstar!”

In the short teaser, Karan asks Sara to name another boy that she wants to date, and Sara quickly says, “No,” before naming Vijay Deverakonda. But Karan says that he sees Vijay and Janhvi making a good pair.