Shefali Shah is riding the success of Delhi Crime

The fact that people are thinking that Shefali is Vartika is what’s really giving me a high, says Shefali 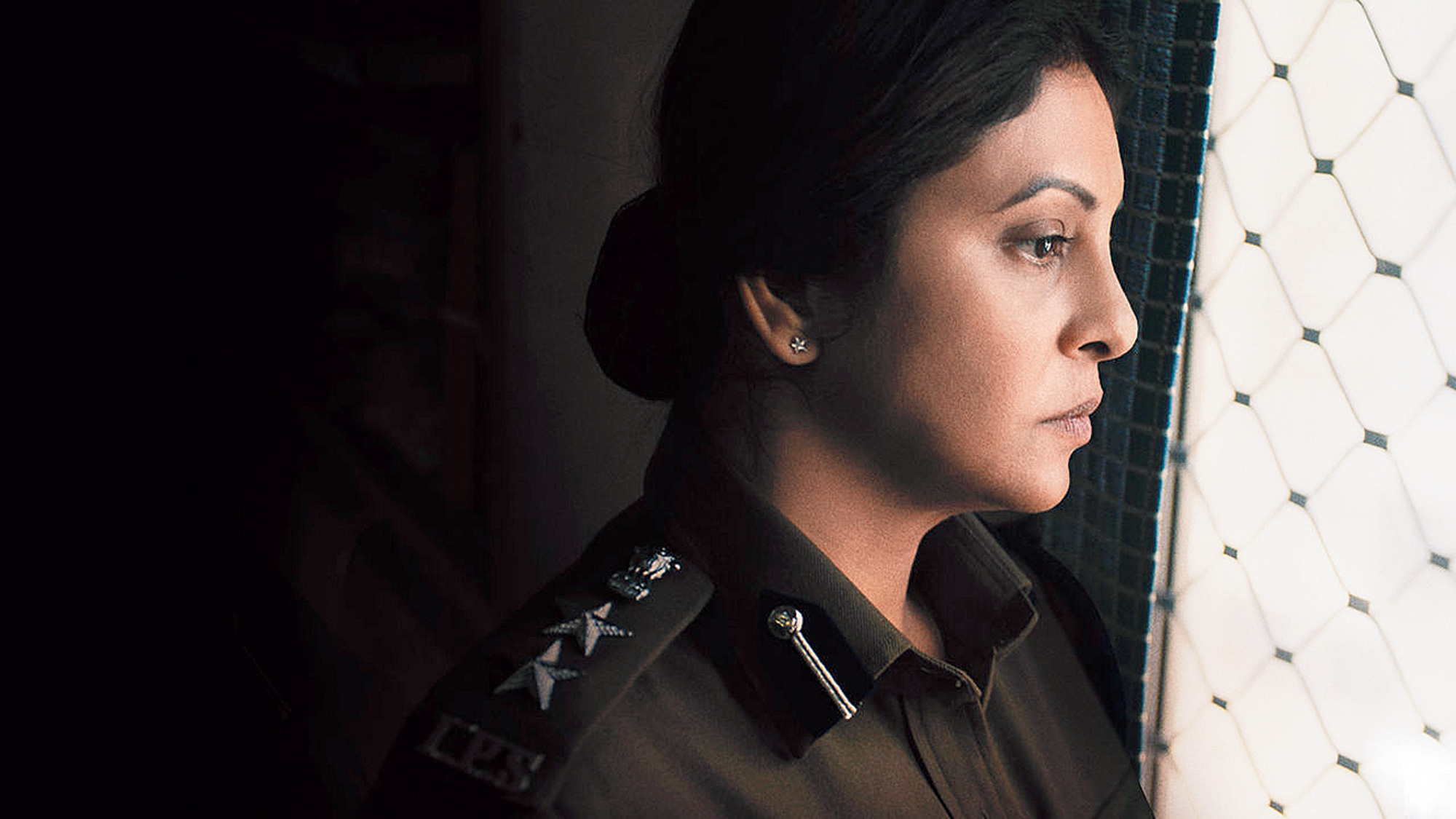 At the heart of Delhi Crime — Netflix’s new show that’s met with glowing reviews and strong word-of-mouth — is a stellar central performance from Shefali Shah. The actress, who plays the part of top cop Vartika Chaturvedi, lets her eyes do all the talking while displaying nerves of steel in the Richie Mehta-directed seven-episode series based on the Delhi gang rape of December 16, 2012. Basking in the success of Delhi Crime, Shefali spoke to t2 on how she became Vartika.

Delhi Crime has come in for unanimous praise, with the chatter not being restricted to just social media. What’s been the best thing you’ve been told about the show so far?

Most people who have reached out to me think it’s the best show to have come out of India so far. It’s raised questions and triggered conversations and it’s a show that’s powerful in almost every possible respect, and not just creatively. The DoP (Johan Heurlin Aidt) is remarkable, the writing (by Richie Mehta) is top-notch…. Every single actor — even the smallest part — has come in for praise, so has the sound, the music, everything. It’s touched the right nerve. It’s been fantastic.

A lot of people are wary of starting it. They are like, ‘We don’t want to revisit the case’. But there are also people on social media who are encouraging others, saying, ‘It’s not about it. It’s about the investigation’. And once people start watching it, they can’t stop.

So was it the fact that it’s a pertinent story that needed to be told that made you want to do it?

This is definitely a story that needed to be told and it was a no-brainer that I wanted to be part of it. I can never visualise what the final product will look like and where it’s going to go… that’s not why and how I pick what I want to do. I don’t pick up a project based on its success ratio. If it instinctively hooks me, then it hooks me. When Richie spoke to me about the idea of the show, I said ‘Yes’ within the first three minutes! He gave me the script and I asked him to give me a couple of days to read it because I was caught up with something else. I went home and read one episode… and in one hour, I had finished all eight episodes! I immediately texted him and said, ‘Listen, I have to do this!’

It’s a very pertinent story, a very strong story. You can also make out the sensitivity of the maker when you watch the show. I did it because I saw what he wanted to do with it. Plus, this was an incident that affected all of us. But I didn’t know this side of the story, honestly… the investigation bit of it.

The director researched the material for four years. What kind of work did you have to put in to understand and play Vartika?

Yes, Richie had done a lot of work on this; he had all the facts in place, particularly about the investigation. His version was a minute-by-minute detailed take on the investigation which couldn’t be left to imagination at all. One of the first things he said to me was, ‘I don’t want an actress on the show. I want a collaborator. I want someone who will meet me halfway and together we will do this’. And that’s exactly how it happened. Yes, of course, there was research and he had interacted with a lot of high-level cops. I also had the honour of meeting the DCP (Chhaya Sharma) on whom my character is based. I did ask her a lot of questions, but I just met her for two hours… you can’t soak in a person in two hours! I asked her all the questions I wanted to. But the intricacies, the moment-to-moment interactions, how she expresses… that can’t be taught or learnt. That has to come from within you.

Yes, I had a blueprint, but I had to create this person. See, this character is not a replica… Vartika is her own person. She’s one of the strongest women characters I’ve seen… doesn’t happen out of nowhere. As an actor, I have to add my understanding and perspective of the character and then my interpretation of it. What did I want Vartika to be? Of course, a lot of it came from the script, but also from me. I don’t work on scenes, I work on the character. For me, a scene is the window between the audience and the character. The scene doesn’t determine who she is; who she is will determine how that scene will play out.

I can’t even begin to tell you the kind of work that’s gone into playing this one. Even if I had to analyse it, I wouldn’t be able to pinpoint it. There is no rulebook on this one. Every day, even till the last day of shoot and then when I dubbed for some portions at the fag end, it was a new day. I would constantly keep thinking, ‘What if I had played her this way? What if I had tried that?’

Also, the show spans just five days and I had to visibly portray Vartika’s exhaustion level. The first thing I would ask when I went on set was, ‘What’s the time?’ And that was not in terms of the time then, but in relation to December 16, 2012. We had to time it according to that. Everything — from Vartika’s exhaustion to her frustration to an adrenaline rush at the last minute because she had cracked a key element in the case — had to be portrayed relative to time. So much stuff, such detailed stuff!

It’s not whether I have done a good job or not… but the fact that people are thinking that Shefali is Vartika is what’s really giving me a high. People can see a full-fledged character, a complete woman.

What was your emotional state when you were filming because it’s not an easy show to shoot?

It was definitely not easy. But for me, as an actor, the way of approaching any character doesn’t work if I am not completely involved. Of course, it doesn’t mean that in the middle we didn’t take a coffee break or we didn’t laugh. It’s not possible… we would have gone mad if we had shot like that! We would have jumped off a cliff!

But just as Vartika and her team are focused on cracking the case, Richie and his team were focused towards cracking this one. The pace we were working at was ridiculously fast. We finished the whole shoot in 62 days… we would sometimes do 18-20-24 pages a day; we would do 12-page scenes in one go. That requires a lot of focus and concentration and it only happened because everyone who was part of this project wanted to do it. This one has easily been my most consuming and enriching experience.

The scene where your eyes speak a thousand words when the prime suspect nonchalantly admits he committed the crime was a standout. Was that the most challenging to shoot?

Emotionally, this was one of the toughest. Also, that scene where the doctor tells Vartika about the brutality of the crime. I am still getting goosebumps; it felt like someone had actually hit me in my gut. It felt like a physical violation of me when I heard it. Vartika doesn’t react to it. It’s not that she’s not affected; she just chooses not to react because she has to focus on the case. Her logic is that she will emotionally block out the incident and use all the anger and pain and channelise it into single-mindedly finding the perpetrators.

As an actor, the scene that was the toughest for me was the one outside the hospital where Vartika gives her team instructions. It was a 12-page scene and Richie wanted to shoot it in one go, and the only person talking in the scene was me! I was sitting on the floor of the loo of my vanity van and bawling my eyes out before the scene! (Laughs) I kept telling Richie, ‘I can’t do this!’ I kept telling him to send the other actors away because I felt I was making a fool of myself. I remember a scene emotionally and then the lines come to me; this scene had nothing to do with emotion, it was just instructions…. But it was not a continuous line of thought… it’s a very broken conversation. I was like, ‘Oh my god! This is so tough!’

Vartika as a mother to a teenaged daughter is an important part of the story. How much of that came from the mother in you?

Once you are a mother, you are always a mother. For me, Chandni (played by Yashaswini Dayama) being Vartika’s daughter goes far beyond the normal mother-daughter relationship. Chandni actually turns out to be the voice of the new generation and she is the face of the angst that these young people feel. Chandni can tell Vartika exactly how she and her peers feel. She’s like a mirror to Vartika.

Yes, of course, because I am a mom, some bits came naturally to me. Like the scene in Episode I, where Vartika goes into Chandni’s room at night and talks to her. When I am sitting with my child, no matter how old he is, I will automatically reach out to touch him. Vartika does the same with Chandni… or even moving her phone away so that they can have a conversation. That’s what my son does… he’s fiddling with his phone while I am talking to him. Or if I reach out to kiss him, he will be like ‘Mom!’ (Laughs)

Absolutely! Look at the kind of content that’s coming out nowadays. OTT platforms have taken away the pressure that would plague films earlier… the pressure of box office, the number of screens it will be played in, what kind of stars it has or even the pressure of censorship…. This is a really big deal. This allows artistes to be true to their craft and creativity, rather than compromising at various levels because ‘XYZ’ factors are determining the story you want to tell.

After so many years in the business, how do you choose your parts now?

Exactly like I did at the beginning of my career — on instinct and impulse. After all these years, I haven’t learnt the business aspect of it. And I am glad I haven’t! I don’t want it any other way. My whole thing is, ‘I want to do it… I will do it!’