Riding on a stellar Shefali Shah, Delhi Crime triumphs both as a police procedural and a human story 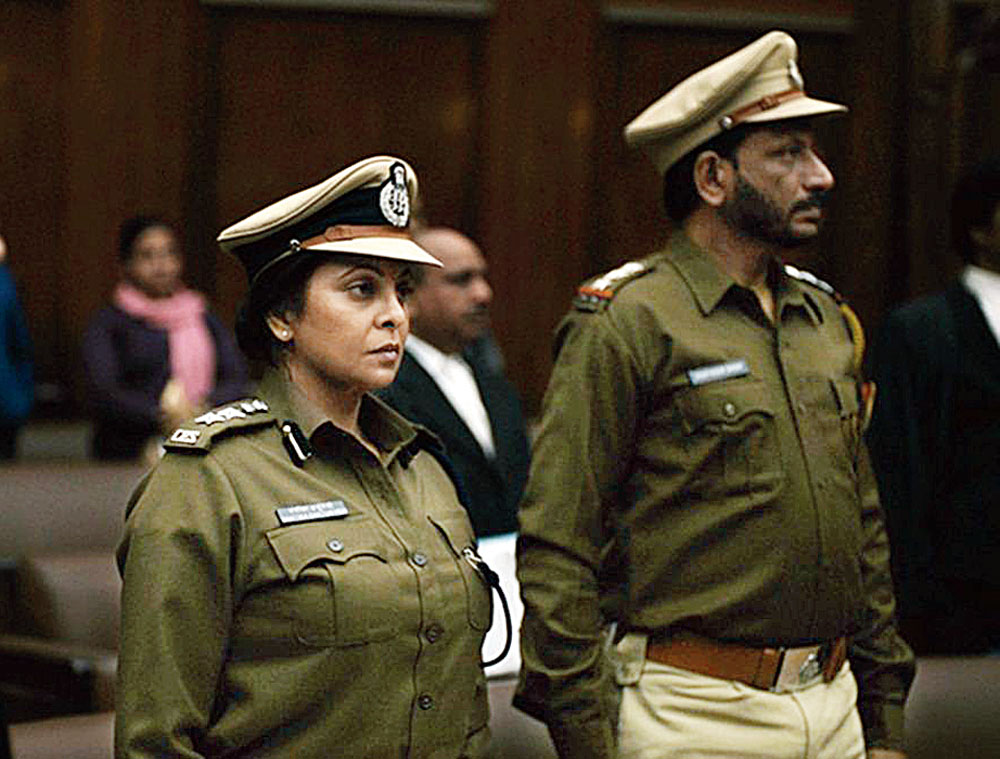 It’s the eyes. Warm and wet at times, steely and searing otherwise. Shefali Shah — who walks the talk, and then some more as top cop Vartika Chaturvedi — is the pivot on which the hugely compelling Delhi Crime rests.

A part fact-part fiction but all-heart retelling of the gruesome 2012 Delhi rape case that shook the nation, brought the youth to the streets and forced the alteration of our anti-rape laws, the seven-episode series, currently streaming on Netflix, is a hardcore police procedural, but what sets it apart is its strong emotional core. Yes, it’s a story of a ghastly crime and its aftermath, but Delhi Crime triumphs more as a human story.

Described as “the crime that took the city to the brink,” Delhi Crime — directed by Indian-Canadian filmmaker Richie Mehta and “inspired by true case files” — chronicles the five days after the gang rape and attempted murder when cops in the capital swung into action to nab the culprits, even as the young girl fought for her life and the country came together, in what was an unprecedented move, to take to the streets in protest.

Heading the crack team in the middle of this pressure-cooker situation is Shah’s Vartika who not only has to piece the case together and bring the perpetrators to justice, but also manage sexism at work and power play in the city’s political corridors. Vartika is also a mother and her school-going daughter Chandni (Yashaswini Dayama) acts as both her catalyst and conscience keeper. A large part of Vartika’s thought and action is propelled by her rebellious daughter’s increasing worries of being a young woman in the city and the heartwarming moments between the two is what make you smile even when things get very dark.

Yashaswini Dayama as Chandni
A still from the series

We all know what happened on the fateful night of December 16, 2012, but Delhi Crime works because it tells the story behind the crime and the redoubtable spirit and resilience of the cops who go all out to nab the criminals. Every episode plays out between 45 minutes and an hour and the storyboard remains faithful to the gist of the real-life story, while taking minor liberties here and there to make the narrative more compelling. What works is that even as you cringe at the facts now — as you cringed back then — and may be forced to press the pause button at times, the show coerces you to keep coming back because Mehta and his actors keep the tension taut. The exhaustion and the desperation is palpable, and the show wants you to see it.

The world of Delhi Crime may be grim and gruesome — a shadow of smog and sadness seems to be perpetually hanging over the city — but there is also humour and hope and a tremendous amount of sensitivity.

That comes courtesy the interpersonal relationships that the cops share. There’s the unspoken understanding that Vartika shares with her long-time lieutenant Bhupendra (Rajesh Tailang, who turns in a top-notch act) and the conversations she has with her extremely supportive boss Kumar Vijay (Adil Hussain has never been better) who has his job on the line but will not allow Vartika to be the fall guy. The relationship that’s the most compelling is the one that Vartika shares with her greenhorn subordinate Neeti (Rasika Dugal is effective as both resolute and vulnerable) and it’s the final conversation between the two towards the end of the series — where Neeti questions whether capturing the criminals alone gives the victim the justice she deserves — is what stays with the viewer.

Jaya Bhattacharya as Vimla
A still from the series

The devil is in the details and Delhi Crime gets it spot-on. You get sucked into the world of crime and investigation, clues and witnesses, and yet it’s told in a way that never alienates the audience. The mise en scene is built very well, from the dank corridors of a police station to the lived-in homes of the cops and criminals.

Even as the procedural engages, one also becomes invested in the lives of the police officers — Bhupendra’s failed attempts to get his young daughter married, Vimla (a powerful Jaya Bhattacharya) doing her duty with professionalism and precision but never getting her due and the affable Sudhir (Gopal Dutt) who straightens hardened criminals with a kick and slap without breaking into a sweat but confesses he would rather have been a teacher.

Mehta, who spent four years researching the project, isn’t one for sugar-coating his material. He presents the grisly facts of the case as they are and your eyes widen and become wet — much like Vartika’s — as you go through the episodes, especially when the survivor narrates her ordeal. For every cop, the case eventually becomes more personal then professional and that’s where the show hits you the hardest.

And while the rest of it is worth a watch, Shefali Shah is reason number one why you shouldn’t give Delhi Crime a miss. The way her face changes colour and mirrors so many emotions when the prime suspect tells her nonchalantly and remorselessly that he did it, is a masterclass in acting. Vartika’s gender never comes in her way — she slaps hardened criminals, cusses at lazy subordinates and can even massage a male ego when required, with tact. It isn’t easy being a woman in a man’s world, but Vartika makes it a cakewalk.