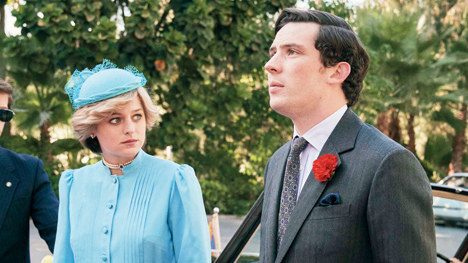 After what felt like a decade, The Crown has finally dropped its fourth season on Netflix and we obviously couldn’t help but binge-watch as Lady Diana made her first appearance in this iconic show based on true historic events tracing the lives of the royal family of the United Kingdom. Ten episodes at an average of 53 minutes each, the fourth season depicts the years leading up to Prince of Wales’ marriage to the young Lady Diana in 1981, played by the inimitable debutante Emma Corrin, and the subsequent fall of their marriage. One can gauge the justified popularity of the television recreation of a person like Lady Diana, which only helps highlight why she was one of the most loved royal family members around the world. Mastering the blush, the coquettish ways and the kindness of heart of Lady Di, she dons one outfit after another, looking ethereal in the recreation of the real Lady Di’s most iconic looks. Fashion remains true to history in silhouettes and colours that only add to the glamour of the stellar fourth season.

Human emotions take precedence in this show juxtaposed with historical events, the dramatisation of which lends an air of surrealism to said events, while the royals get more and more unfeeling using the excuse of ‘duty’ to cloak their crippling lack of empathy. In a poignant scene in episode six (Terra Nullius), a distraught Diana overcome with emotions and tears, cries out for help to the queen (Olivia Coleman) and hugs her with an intensity that can only be mustered by one who is truly helpless. She is only met with a stiff, unresponsive mother-in-law who subsequently sits at a dinner table turning the hug into an anecdote for petty laughter.

One of the most interesting episodes this season is The Balmoral Test where new prime minister Margaret Thatcher (Gillian Anderson in a wig and a lilt in her tone that is reminiscent of the real Margaret Thatcher but only slightly more drawn out) is invited for a weekend at Balmoral, hunting and merrymaking. While she sticks out like a sore thumb in a completely inappropriate bright blue outfit for a day of stalking and hunting in the estate, contributing to her early departure, a 19-year-old Diana Spencer is a raging hit for everyone involved! This contrast of acceptance of the two women from similar privileges and lack thereof, Lady Di and Prime Minister Thatcher are both trying to do the best they can in their individual efforts — one to be a good mother and royal and one to save the country.

While the most important event taking place in this season is perhaps the marriage of Prince of Wales and Diana Spencer, there are other events of significance that this season has beautifully depicted by getting inside the emotional veins of the audience. The death of Lord Mountbatten (Charles Dance) in the hands of the IRA and the subsequent reactions of each royal family member who individually shared an intimate relationship with their favourite father figure Dickie, as he was lovingly called. Princess Diana’s eating disorder triggered by her unsettling flux of loneliness is sensibly captured in multiple scenes with Emma Corrin hunched over a toilet. Michael Fagan, a Londoner who successfully broke into the Queen’s bedroom in Buckingham Palace, has found a dramatised episode to itself covering the event. Amidst Thatcher’s oft-debated economic policies, the country was in the midst of rising unemployment, and this is depicted through a social commentary from Fagan’s mouth in the eponymous episode.

Not just stellar acting by every cast member, a declining princess Margaret (Helena Bonham Carter) takes our heart as the sickly, deprived senior royal. There is an understanding that seems to have developed around the queen as she accepts the people around her for who they are. While things start off on the right foot with Thatcher, who happens to be the first female prime minister of the UK, they don’t last long. However, it is the queen and the evolution of her relationship with her husband Prince Philip (Tobias Menzes) that steals the show in this season. There isn’t any part of the show that we didn’t like, and the fourth season definitely made one feel like the show was just building up to this very moment of gloriousness. Deep dive in the moors of England and let the history nerd in you appreciate some of the very best storytelling and acting in recent streaming history.