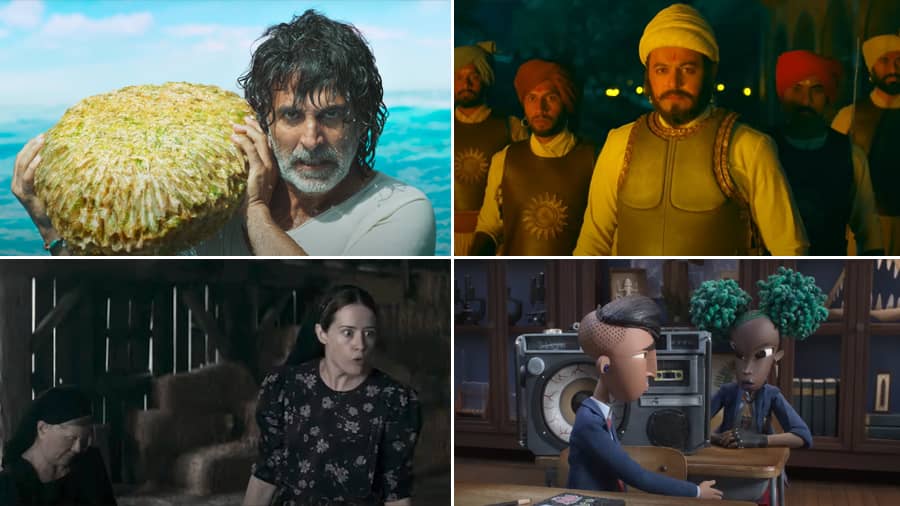 The trailer showcases Kumar as an archaeologist-turned-believer who must race against time to prove the true existence of the legendary Ram Setu before evil forces destroy the pillar of India’s heritage. He sports a special suit and dives underwater to have a look at the mythical bridge.

Ram Setu will arrive in the cinemas on October 25.

Retelling the story of Chhatrapati Shivaji and chronicling the journey of Baji Prabhu Deshpande, the trailer gives us glimpses of battle sequences with a power-packed background score.

Har Har Mahadev is set to hit the theatres on October 25.

Based on Miriam Toews’ bestselling book of the same name, the trailer depicts how several women in the isolated Mennonite community cope in the aftermath of sexual abuse. The women must decide what to do: remain quiet or fight back. The film is produced by Brad Pitt through his production company Plan B.

Women Talking will be released in the theatres on December 2.

A special video of Nivil Pauly’s upcoming Tamil film Yezhu Kadal Yezhu Malai has been shared by the makers. Directed by Ram and produced by Suresh Kamatchi along with V House Productions, the film also stars Anjali and Soori. The music of the film is composed by Yuvan Shankar Raja.

Without giving away much about the plot, the announcement video, featuring the characters as animated figures, hints at an intense love story between Nivin’s and Anjali’s characters.

Netflix has dropped the official trailer of its upcoming stop-motion animated film Wendell & Wild. The film is directed by The Nightmare Before Christmas fame Henry Selick and produced by Academy Award-winner Jordan Peele. The voice cast includes Keegan-Michael Key and Peele as the titular characters with Angela Bassett, Lyric Ross, James Hong and Ving Rhames in supporting roles.

The synopsis reads, “The titular characters, a pair of demon brothers played by comedy icons Key & Peele trick troubled teen, Kat Elliott (Lyric Ross), into bringing them from the underworld into the land of the living and mayhem ensues.”

Wendell & Wild will be streaming on Netflix from October 28.