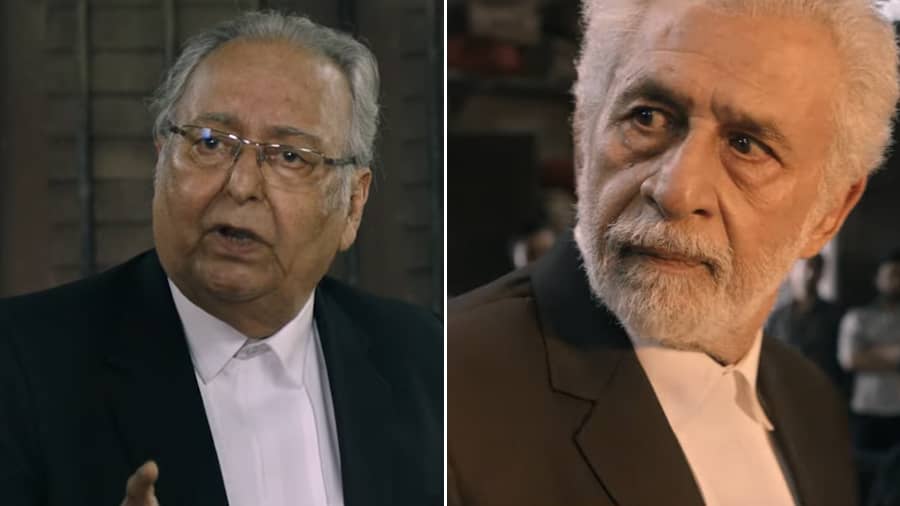 During the shoot of A Holy Conspiracy, legendary actor Naseeruddin Shah would wait patiently on the sets to give dialogue cues to his co-actor and icon Soumitra Chatterjee.The thespian had undergone an eye operation just before the shoot but once he was on the floor, no one could gauge that he was under any physical strain, said director Saibal Mitra.

The trailer of the film

The filmmaker said that such was the camaraderie between the two stalwarts that Soumitrada would gush over Naseerji’s acting repertoire and his command over a scene in the trilingual movie, which is set to hit the big screens on July 29, after a wait of over two years.

“The day when Naseerji and Soumitrada met on the floors, we saw how the two legends of Indian cinema revered and loved each other,” the director said.

For the first time, Soumitra Chatterjee and Naseeruddin Shah had come together on the silver screen in A Holy Conspiracy, adapted from the famous American play, Inherit the Wind.

“Both Naseerji and Soumitrada were supportive about the subject of the movie which talks about India's great secular tradition,” the director said.

In this movie, a teacher is arrested and a case is lodged against him for not mentioning the role of religion while teaching science in a small-town school. It is a courtroom drama where Naseeruddin Shah and Soumitra Chatterjee play the role of lawyers.

The film revolves around the debate on what is more important religion or science and the plot is set against the backdrop of an Adivasi Christian-dominated area in Hillolganj, a township in Jharkhand.

The characters speak in Bengali, Hindi, and English. “We came to know that it was the wish of both the icons to act together in a movie someday. I was fortunate that it happened in my film for the first and the last time.

We are really sad that Soumitrada is no longer with us and we hope that the viewers of Indian cinema will remember the movie for the memorable performances of Naseerji and Soumitrada," Saibal said.

The film also stars Biplab Dasgupta, Amrita Chattopadhyay, and Kaushik Sen in key roles. “I just sent him (Naseerji) an SMS with the proposal to act in my film. I was not sure whether he would reply but to my surprise, he immediately wrote back and asked me to come to Mumbai and meet him. And my journey began with him,” Saibal said.

Naseeruddin Shah enthusiastically participated and contributed to developing the script, added Saibal. “It was a great experience for me and a learning process too... then he came to shoot in Kolkata and all of us were surprised to see how a great actor prepares for the character he portrays. It was a lifetime experience for me as well as for all other actors and technicians on board the project,” the director said.

About Soumitra Chatterjee, Saibal said, “He tried to give his best despite his advanced age conditions. He would often tell me about his health and regretted that had this opportunity come to him a few years earlier he would have been in a better shape health-wise. But despite everything Soumitrada had no competition among his contemporaries.”