A bicoastal ceremony, winners accepting trophies at home and presenters appearing at the locations of their choosing. The award ceremony had quite a few firsts. Bringing you the details.... 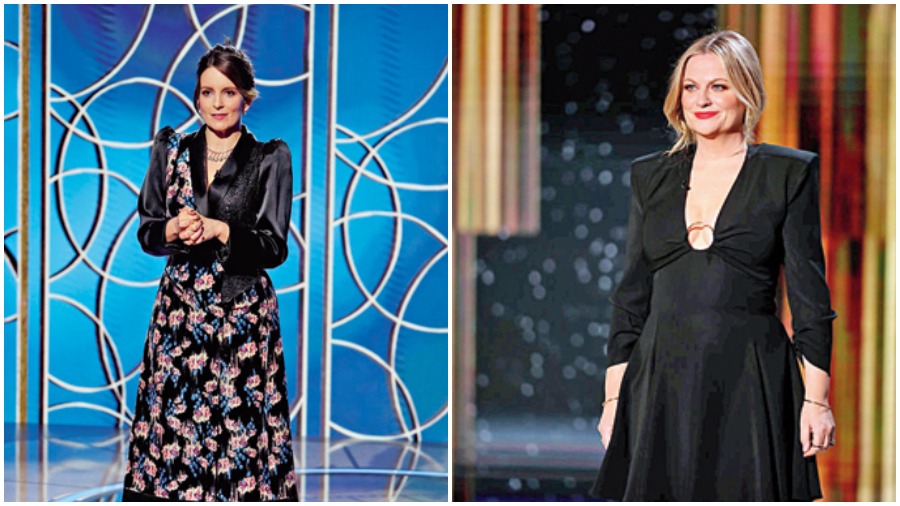 Tina Fey and Amy Poehler reunited to host the Golden Globes after six years. But not on the same stage. Fey was at the Rockefeller Center in New York while Poehler hosted from the Beverly Hilton in Los Angeles. The two, who are electric on stage together, didn’t allow distance to get the better of them, delivering an opening monologue that roasted the awards’ lack of diversity. They also came up with some fun ones like, “At the Golden Globes, we give out awards for movies and TV. But I mean, it’s hard to tell them apart this year because movie theatres were closed, and we watched everything on our phones.”

The year that’s been for all of us (Zoom, we are looking at you) was best summed up by Daniel Kaluuya. The Get Out actor — who won Best Supporting Actor for Judas And The Black Messiah — delivered a big part of his speech from home on mute, only to realise much later, and then mouth the familiar words, “Is this on? Can you hear me now?” Yes, relatable AF!

Rosamund Pike’s chilling anti-heroine turn in I Care A Lot deservingly won her the Best Actress in a Motion Picture (Comedy or Musical) award. “HFPA (Hollywood Foreign Press Association), thank you! Thank you for recognising, I suppose, the dark side of comedy,” said the actress, who makes bad look so good. On screen, of course!

The most emotional moment of the evening came when Chadwick Boseman was announced as the recipient of the Best Actor in a Motion Picture (Drama) for Ma Rainey’s Black Bottom. The Black Panther star, who died of cancer last year, was represented by his wife Simone Ledward Boseman who won hearts with an emotional acceptance speech. “He would thank God. He would thank his parents. He would thank his ancestors for their guidance and their sacrifices. He would say something beautiful, something inspiring, something that would amplify that little voice inside of all of us that tells you, ‘You can,’ that tells you to keep going, that calls you back to what you are meant to be doing at this moment in history,” she said tearfully.

The queens take it all

Taking home the Golden Globe for Best Actress (Limited Series, Anthology or TV Film) was Anya Taylor-Joy for her stirring and steely portrayal of a chess prodigy in The Queen’s Gambit, that also won the honour for Best Limited Series, Anthology or TV Film. “It’s obviously wonderful that everyone has seen the show, but I would do this project again and again and again,” she said, hinting at a possible Season 2 for the smash-hit Netflix series.

The other big winner of the night was The Crown, that notched four awards, including Best TV Series (Drama), Best Actress (Drama) for Emma Corrin and Best Supporting Actress for Gillian Anderson.

Honoured with the Cecil B. DeMille Award this year was Jane Fonda. The 83-year-old actor — who rewore a cream tuxedo as part of her commitment to not buying new clothes — called for more inclusion in Hollywood’s storytelling ranks. “There’s a story we’ve been afraid to see and hear about ourselves in this industry. The story about which voices we respect and elevate and which we tune out. It’s about who’s offered a seat at the table and who was kept out of the rooms where decisions are made. So that’s all of us, including all the groups who decide who gets hired and what gets made and who wins awards,” said the super fit and still stunning Fonda.

Best Actress (Musical/Comedy): Rosamund Pike for I Care A Lot

Best Screenplay: Aaron Sorkin for The Trial of the Chicago 7

Best Actor (Limited Series, Anthology or TV Film): Mark Ruffalo for I Know This Much Is True

1 A fresh-faced Renee Zellweger, one of the presenters of the evening, kept things simple yet stylish in a black Giorgio Armani Prive gown — sticking to her go-to Globes designer. The inky black dress, with a sweetheart neckline and subtle high-low hem, was paired with matching pointy pumps.

2 ‘Wonder woman’ Gal Gadot channelled old Hollywood glam in a flowy white Givenchy dress with sheer sleeves. The stunner accessorised her look with jewellery from Tiffany and Co (we heart that necklace!) Wavy hair, bright red lipstick and strappy heels completed a look that was understated yet striking.

3 Serving up some much-needed colour in a sea of whites and blacks was Salma Hayek, who was a vision in a cherry red Alexander McQueen gown, that featured a halter-style neckline that gave way to a train detail. She went all out in the jewellery department, sporting multiple diamond bracelets from Harry Winston and an exquisite ruby ring.

4 If anyone knows how to rock a sharp suit, it has to be Laura Dern! The 54-year-old statuesque actor did duties as presenter in a menswear-inspired Givenchy suit paired with a fitted bustier that featured a bold choker neckline. Classic red lips and a pair of edgy spiked heels made the look an instant hit.

5 Serving up some sheen and shine on the Golden Globes stage was Tiffany Haddish in a custom-made strapless Alberta Ferretti brown-and-silver column evening gown. Her short blonde crop was matched with statement earrings, dewy make-up and glossy lip.

6 When it came to high drama, there was no looking past Cynthia Erivo who turned up in a bright and bold neon green Valentino Haute Couture dress and sky-high metallic silver platforms. She topped off the ensemble with jewels by Wempe and Maria Tash.The actor’s stylist Jason Bolden described the look as a “much-needed fantasy” and that amid the pandemic, he and Erivo wanted to select a look “to just make us all smile”.

7 You can always count on Michael Douglas and Catherine Zeta-Jones to keep it classic and cool. The couple — looking like they were out on a date night — coordinated their looks. She was in an off-the-shoulder ruched black gown with a sexy slit up the front and bead detailing, accessorised with drop earrings, a David Yurman ring, and platform heels. He looked dapper in a black suit with dark button-up and a black tie.