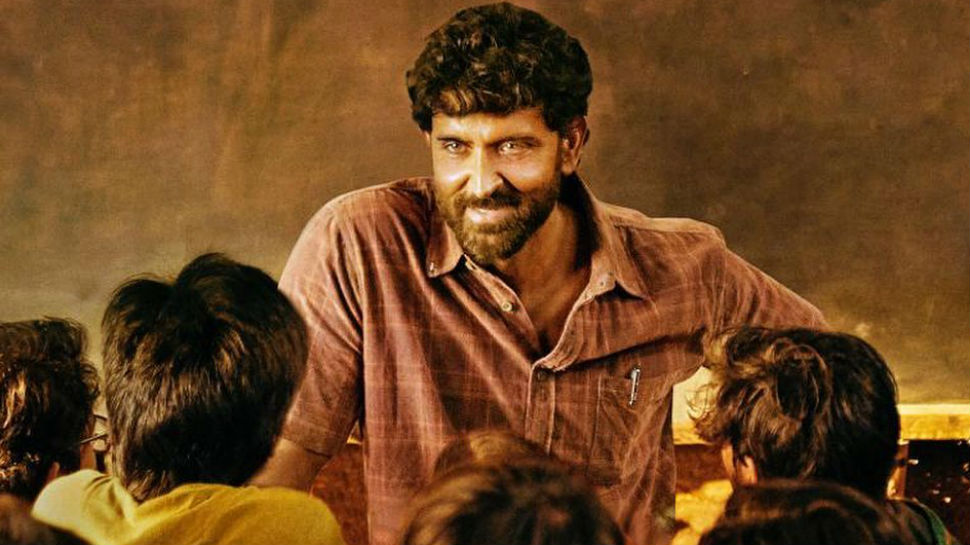 When Super 30 moves into a classroom environment with prolonged scenes between teacher and students, things must be made viewer-friendly through relatable problems
A still from the film Super 30
Jai Arjun Singh   |   Published 15.07.19, 10:43 AM

Early in the new film Super 30 – a dramatised biography of Anand Kumar, mathematician and mentor to underprivileged students in Patna – the young Anand (played by Hrithik Roshan) aspires to get a paper published in a UK-based journal. But what theorem can he prove, what new formulae can he come up with? As he sits in front of a blackboard, a Eureka moment arrives: he jumps up and begins writing equations furiously. The background music builds.

This scene, along with a few others, is a reminder that any film whose plot hinges on advanced Math or Physics has an innately tricky task: given that these are highly specialised, “difficult” subjects, how to convey what is going on?

With a more accessible problem – a linguistic brain-teaser, a riddle– a film can create a pleasing “Aha!” moment for any viewer who has basic knowledge of the language in question. Consider the TV show Sherlock where, each time Sherlock Holmes deduces a dozen things about someone with a glance, the camera homes in on parts of the person’s body or clothes and we get textual information about what the sleuth noticed. Along with beeping sounds that make it seem like we are watching a supercomputer processing system. (Which we are. But we can at least follow the workings of this human computer’s mind.)

Complex Math, on the other hand, doesn’t easily fit into a general-audience, narrative film.

If you have watched films like A Beautiful Mind or The Theory of Everything (about John Nash and Stephen Hawking respectively), you know the tropes: the genius scribbling away, digital effects and superimpositions creating an impression of order emerging from chaos, a solution coming out of a jumble of quadratic equations. There isn’t a hope in hell that the average viewer will understand what the figures and numbers mean, but a vague sense of something profound and earth-shattering has to be created. Similarly, in the Super 30 scene mentioned above, the film must rely on Hrithik Roshan’s concentrated intensity and the swell of the music. But what Anand has actually done lies beyond our ken.

“Maths ko apni zindagi se jod do,” says a prodigy in this classroom as he helps his friends with their lessons.“Maths se dosti karo.” And the film complies, even offering a catchy song titled “Maths mein dabba gul”, the lyrics of which include lines like “Bhayankar hai situation / with quadratic equation”. Everyday things are related to mathematical concepts: “tyre, tube” can be rhymed with “square, cube”.

This sort of thing, even when done well, can raise questions about dumbing down. Is some over-simplification inevitable in films dealing with such topics? There’s a scene in The Theory of Everything where Stephen Hawking has a grand epiphany while staring at the coal in a fireplace – this is convenient shorthand for a general audience, but it also has the effect of making Hawking’s science seem like a magic trick, or a divinely obtained moment of inspiration. As Professor Leonard Norkin put it in an article shortly after the film released: “Representing Hawking’s discovery in this way is a disservice to the science because it disregards the intense effort that lay behind it.”

But popular cinema hasn’t single-handedly created such ideas – there have often been mystical associations around prodigious talent in these fields. Even the legendary mathematician Srinivasa Ramanujan believed that the formulae that came to him had been placed on his tongue by a goddess while he was asleep; that he was just a vessel for a mysterious higher power (pun unintended).

This idea – that some people have been granted an inexplicable gift for subjects which most other people find hopelessly difficult – lies at the heart of Super 30’s thesis that the world no longer belongs to the children of kings; that when it comes to somethings, there is no “natural talent” waiting to be passed down from one generation of Rajas to the next.

Among the better scenes in this uneven film are the (much-too-brief) ones where we meet some of the youngsters who will make up Anand’s first batch of students. These are poor children expected to live in servitude, not have any ambitions above their pre-designated stations – much less think of joining NASA, finding life on other planets, or working on the relativity theory! There is something otherworldly about their passion and aptitude for things so removed from their daily lives; they will have to work hard to succeed, of course, but that initial fire in their belly comes from an unknowable source. And this is also where the parallels with the story of Ekalavya – the tribal boy, cheated of his dreams by the royal teacher Drona – come in.

The climactic sequence of Super 30 has the students putting their classroom knowledge of parabolas and trajectories into practice and becoming Ekalavyas – almost literally so in one scene involving a form of archery. The sequence isn’t particularly well-executed (in general the film’s last hour is rushed and confusing), but there is some neat symbolism here: underprivileged youngsters responding to the slings and arrows of outrageous fortune with slings of their own; holding the fort against the henchmen of the world’s princely Arjunas and obsequious Dronacharyas. Most intriguingly, they do it with Maths as their ally and “dost” –a seemingly elitist subject has been pressed into the service of a more egalitarian world.

And to a degree, this is okay. When Anand writes a letter to his girlfriend, expressing his feelings, and it turns out to be in binary code, we don’t understand what it says, but it’s enough to proclaim Crazy Brilliant Nerd – which is all that the scene requires. (This, incidentally, is also the point where I started to feel grateful that Roshan plays this role straight – not in the register of the wild-eyed idiot-savant of Koi Mil Gaya, or the wild-eyed idiot of Main Prem ki Deewani Hoon. That would have been overkill for this film.)

But when Super 30 moves into a classroom environment with prolonged scenes between teacher and students, the stakes rise. Things must be made viewer-friendly through relatable problems (how hard will Tendulkar have to swing the bat to hit a six on a ground of a certain size, against a Shoaib Akhtar delivery of a certain speed?) and cutesy touches such as metallic question marks appearing atop the students’ heads.

Obvious comparisons can be made with other recent films about teachers or coaches who work magic in seemingly hopeless situations – films like Hichki, in which Rani Mukherji manages both a neurological disorder and a bunch of unruly quota students, and Taare Zameen Par, in which Aamir Khan sings “Bum Bum Bole” and defeats dyslexia. But another, lower-key film I was reminded of was the Swara Bhaskar-starrer Nil Battey Sannata, in which a single mother, working as an ayah, joins the same class as her adolescent daughter.

In films like A Beautiful Mind, there isn't a hope in hell that the average viewer will understand what the figures and numbers mean, but a vague sense of something profound and earth-shattering has to be created
A still from the film A Beautiful Mind