Advertisement
Home / Entertainment / Neel Adhikari on the music scene there, fatherhood and how the success of Little Things led to more national projects

Neel Adhikari on the music scene there, fatherhood and how the success of Little Things led to more national projects

‘I thought Mumbai was all about the schmooze, and clearly, it’s not. It’s about output’ 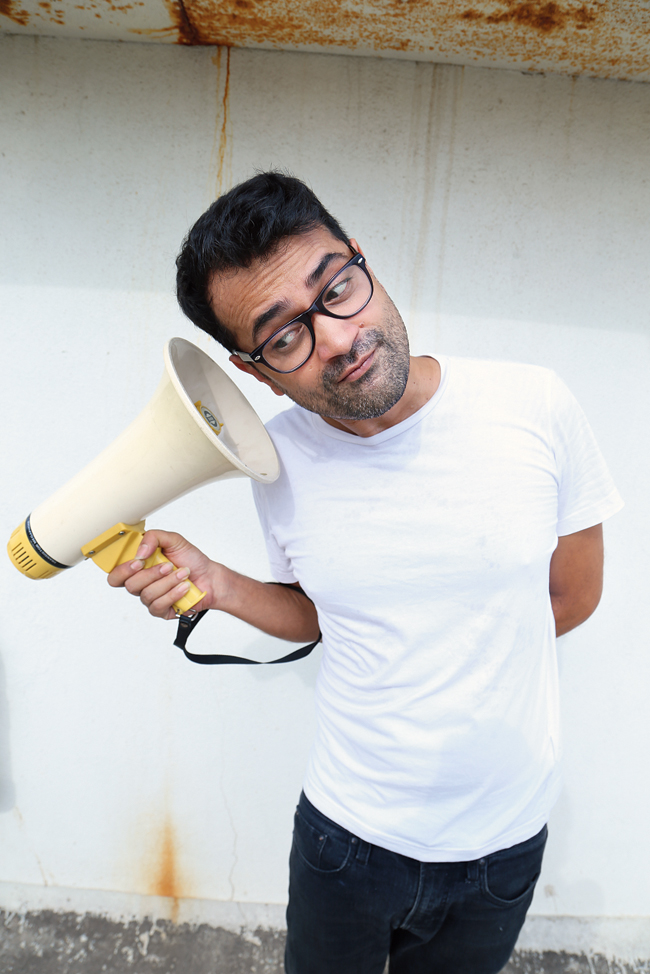 The last two months have been therapeutic for singer-songwriter-composer Neel Adhikari. “We are holding up rather well. We’ve spent more family time now than ever before, compensating for 2019, which was a crazy busy year,” says Neel.

Are you writing and recording music during the lockdown?

Oh yes. The newest song I wrote is called Beyond The Edge Of What We Know. I’ve recorded about six or seven songs during this quarantine. While some are new, some are 14 years old but never recorded. Work hasn’t stopped for us, as in Sanjay Das and me. He’s been working with me on everything I do. We’ve overcome our 20-year age gap rather well!

Have you picked up any new skills during this time?

I would have loved to say yes. However, my piano, ukulele and dotara skills have slightly improved. I’ve learnt a thing or two in the kitchen. Not to forget, now I’m a champion dishwasher!

It’s been four years since you moved to Mumbai. How is it been like there?

It’s been rather awesome. I entered the city expecting a lull in my career, where I thought I’d concentrate on making an album of one-minute songs and be a good father. I wrote 11 songs, all approximately a minute each. But then life got busy with Little Things Season One hitting my world after six months of the move. The vibe of the show was perfectly and completely aligned with my own vibe. At that point, Dice Media was a much smaller company. Ashwin Suresh and Anirudh Pandita, the producers, were in my room watching me compose quite often. The meaning of the word ‘producer’ changed after seeing them. There was no problem that couldn’t be solved and no direction that was force-fed to the musical zone of the series. The series became a big success and then work rolled in at such a pace that I still haven’t recorded the album of one-minute songs till date.

You once wrote in a t2 article, “So while I have changed my address, I don’t feel like I’ve actually left town. I have in fact sown my seeds in the city to keep coming back.” Do you miss Calcutta?

I miss Calcutta. Today my heart bleeds for Calcutta. I feel the loss after Amphan has ravaged the houses of the poor and uprooted so many of my favourite trees I’m sure. What I miss most about the city are the people. People care in Calcutta. There is time and space in their minds for reflection and kindness. And I differ with the way many Mumbai professionals view Calcutta (a slow city of nostalgia and romanticism). While all of that is true, there’s a lot more to the city than that.

How do you look at the city now from a distance?

I view the city as a glowing incubator of new and fearless thoughts and ideas. Innocence from the hustle of the marketplace sometimes affords us bravado. That equation has worked for me in music. If I don’t know it’s wrong, then I can pull the concept far enough till I make it work, no matter what the grammar or critics say. I really see the city as space for individuality to bloom.

Luca (4) has discovered Hayao Miyazaki (the father of anime) in this lockdown. He has watched about 10 of the Studio Ghibli films and already prefers the Japanese fantasy world than the superhero universe that all our children love so much. Luca loves animals and birds and even insects. His favourite band was Jungle for a while and Happy Man his favourite song. He also loves Joe Hisaishi the composer for all of Miyazaki’s classics. Another favourite is We Will Rock You. He also loves Billie Eilish and bops up and down to Bad Guy. There’s no pressure from my side for him to pick up any instrument. He loves music. It’s my parental tool to avoid conflict when he’s in a bad mood. Luca loves Rewind (album by Neel and the Lightbulbs).

How has fatherhood changed you?

Completely, and not at all. I enjoyed that (contradicting myself in a single sentence). Fatherhood made everything I do a little more solid. I just got used to finishing better. When one human’s growth and knowledge and life are your responsibility, the other things in life get easier and you have that psychological room to finish those things better. It did cut me off from the parties of the world for a period of four years, but now I’m back.

What is the best compliment that you have got for the music of Little Things?

It’s impossible to single out one compliment. But yes, that show sure did send a whole lot of love my way. It also removed a lot of doubts I had about my own music. It gave me confidence. It gave me more confidence than the awards I won.

Was the success of the show a turning point in your career?

I surely look at that show as a turning point of sorts. Prior to that there was a great divide in the music I did for films and the music I made for myself. This show bridged that gap. The zones of music in my head and heart became a common pool from which I could tap. Today I have better access to my own music. The show’s success defeated my own pessimism. It led to a chain of projects of different vibes and sounds. One project led to another (What The Folks, Garbage, Bose, Laakhon Mein Ek, Zero Kms, Kia & Cosmos, Why Cheat India, Thinkistan Season 2, Afsos, Hasmukh) and the whole thing grew on itself.

Tell us about the music that you composed for Hasmukh and Afsos... from conceptualising it to execution?

I’m very thankful to the machinery of karma for putting the advent of new black comedy in India , on my plate. Afsos was very special, because it came to me at a script level. Anirban and Dibya, the writers of the show, came over and told me the story in one epic evening of laughs and wonder. I immediately knew that it was one of the best scripts I had ever heard. But I still had doubts about how many slips there would be, between the cup and the lip. When they got Anubhuti Kashyap in to direct I knew that the producers wouldn’t interfere with someone who’s got that kind of experience in cinema as a medium, although it was her first series as a director. It was a real pleasure to work with Anubhuti. She was calm, sorted and extremely competent in all areas of moviemaking. The initial cuts reflected that it had been made right in spite of constraints. It was a magical experience with too many anecdotes to mention here.

Hasmukh came to us while we were still finishing Afsos. I had never seen anything of Vir Das before Hasmukh. I was immediately blown away by his performance and then later checked out his stand-up shows. Nikhil Gonsalves and Nikkhil Advani were superb to work with. Every time I got a comment on the music from them I found myself nodding in agreement purely from cinematic logic. It was a great learning experience for me. I worked with a tight unit of two other musicians to form the core team. Sanjay Das (Philtersoup) and Dhritiman Das (Topshe). They were fantastic and added compositionally to both projects. That apart, Arijit Singh, Pati Amor (who has sung for Killing Eve) and Zeenia Roy added vocally to these projects.

How tough is the competition out there?

So I thought Mumbai was all about the schmooze, and clearly, it’s not. It’s about output. It’s cut-throat for anyone who compromises on the output of what they do. It’s a breeze for those who know what they’re doing purely from a craft and context point of view. The struggle period of people who’ve moved to Mumbai is more if you move in your 20s. I moved when I touched 40. So I had a body of work to show. It did help that I had done most of Q’s films till then.

The circuit of directors and film people who followed the arthouse scene knew me. Ruchir Arun was such a friend with whom I worked on several great projects and who opened a few doors for me. He recommended me to the producers of Little Things, which he went on to direct later. I am in the loop with all of the maverick, brilliant scripts he writes and he has heard all my unreleased songs. So as always I put my work out and new work finds me. I never ended up doing the trademark round of studios asking for work. Till date I haven’t made a showreel for myself. This is a fact that I’m not very proud of and yet I’m proud of it (contradicted myself in a sentence again!). Let me rephrase, I’m thankful for it. But yes, now I want to collate my work because it looks nice together.

How was your experience working with Arijit Singh for Afsos?

I couldn’t meet him because he was travelling when he recorded. When Mourjo Chatterjee of On Stage Talents sent him the scratch of the Afsos song he agreed to sing it just ’cause he liked the song. The fact that the story was amazing and Anubhuti was directing helped I’m sure but I look at Arijit Singh as a genuine artiste magically existing in this commercial circus and untouched by it. He’s like a unicorn. He sounds great in the lower registers also. Everyone dotes on his epic high notes but his matter-of-fact mid-ranges and warm lows make him an incredible singer. Also, mostly because when he sings he really means the words.

Is there a signature Neel Adhikari sound?

I try my best not to have it. I find that process of culling your own music to arrive at a net effect very artificial. I’m totally unconscious of how I get my sound and that keeps the magic alive for myself. Starting from classical fusion to Rabindrasangeet to folk fusion to indie singer-songwriter to protest rap to rock ’n’ roll, I have worked in every genre of music. I’m thankful for that. I’m incapable of viewing my entire musical life through the filter of a genre. To be honest, a genre is a bracketing tool. It helps interested listeners find you. But often it chokes the music of artistes too eager to be found. Having said that I really respect musicians who dedicate their lives to one genre of music. It’s just that things have worked out differently for me.

I’m about to sign a Hindi film and two short films. Anubhuti Kashyap is directing one of these shorts, and we’re excited to work together again. That apart I have recorded seven songs of mine, which I will put out with DIY videos very soon. Dibya Chatterjee and I have been planning a video, while Little Things waits for me in the not-too-distant future.