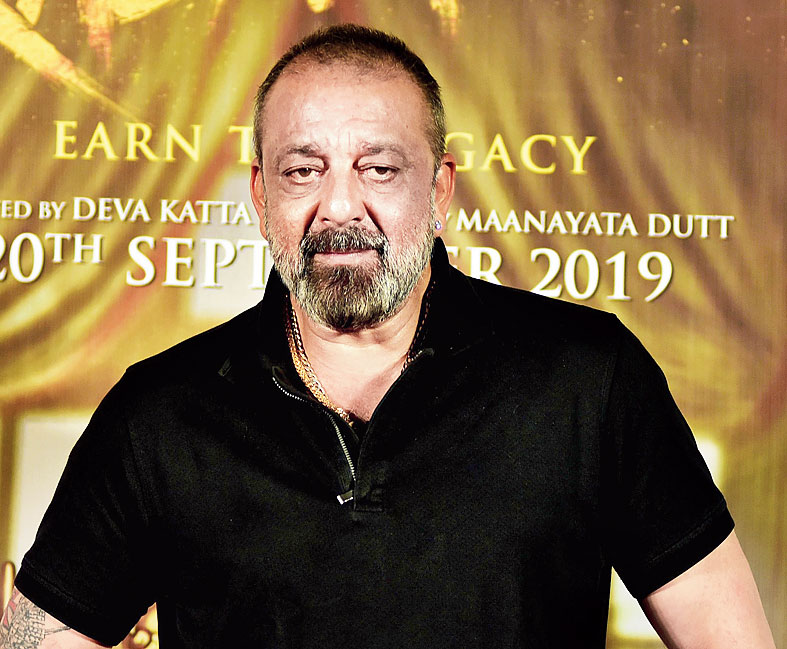 Sanjay Dutt aspires to make his production house as prestigious as that of Yash Raj and Dharma
Sujit Jaiswal
Published 03.08.19, 07:04 PM

I’m turning 60. Can you believe it?” That was Sanjay Dutt on July 27, two days before his birthday. When he was welcomed to the senior citizens’ world, he grinned, “I believe we don’t have to stand in queues?” Yeah, we get a separate queue and we also get 0.5 per cent higher bank interest than the others, I told him. “And I believe we get some tax concessions too?” he horsed around. Until he was reminded, “When was the last time Sanjay Dutt stood in a queue anyway?”

The banter was in his lovely duplex apartment, where a sumptuous high tea was spread out on the table and, in the much-leather-upholstered den, he had the trailer of his film, Prasthanam, on loop. The Dutt who kicked the media in the last scenes of the Raju Hirani-directed film, Sanju, had vanished. This was a casual, kurta-clad Sanjay, playing host to a handful of media people. It worked very well because unlike the impersonal trailer launches that filmmakers hold in theatres, the meet-at-home was cosy and warm with Sanju chatting away with each of his guests.

But any question about his new film-making banner, Sanjay S Dutt Productions, and the actor chivalrously handed it to wife Maanyata. “It’s all her doing,” he said, letting her take the reins. His father Sunil Dutt’s production house used to be called Ajanta Arts, “which had become really old”, Sanju remarked. Hence the fresh eponymous name for new beginnings.

“When he was incarcerated for three years, I started looking for really strong content,” said Maanyata. By the time he served time and came out, she had it all battle-ready. He was fine with the idea of setting up their own production house but lay down a few conditions. “Content,” he said, “our films must have great content.”

He also aspired to make the house as prestigious as that of Yash Raj and Dharma, “who treat everybody so well, it’s something else working for them”.

“We must have a reputation as fine paymasters and people must find it a pleasure to work with us,” he had told Maanyata.

Sanju mentioned one or two producers from his long career who would treat the stars well but serve miserable food to the rest of the crew. He didn’t ever want anybody who worked with him to say that about him — everybody must be served really good food.

Fortunately, food is also an area Maanyata is at home in. She has started FrankTea (with Sanju’s pic in a chef’s cap in the logo), a catering service that has tied up with a cinema chain to serve a selection of something like Frankies along with a selection of teas, “to suit different palates”, she explained. In and out of the kitchen was her catering staff, who rustled up some finger-licking stuff for anyone who wanted something that wasn’t already on the table.

SSD Productions had its first release, Baba, in Marathi on August 2. “It’s going to be a hat-trick for us this year,” said Maanyata, who alternated quite easily between the roles of producer and homemaker. Prasthanam, a political action film originally made in Telugu, is slated for release this September with another coming up by year-end.

“I have three babies in the office and three at home. The biggest one at home is the most demanding,” she smiled while her chirpy nine-year-old daughter, Iqra, peeped from the staircase before joining us. Her twin brother, Shahraan, was out playing football in the rains. “Sanju says he must grow up tough,” explained Maanyata.

Years ago, Sanju was conservative about the women at home — he hated the idea of his first daughter, Trishala (the 31-year-old grew up and lives in New York), becoming an actress. But Maanyata was confident that’s not how he’s going to be with Iqra when she grows up. “Let’s just say he has evolved,” she put it pithily.

It will all be bared in the autobiography he’s penning along with veteran journalist Meena Iyer, who also did the Rishi Kapoor book two years ago.