He studied at Frank Anthony Public School and Scottish Church College and took his first steps as a musician playing at various city college fests. Today, Tanishk Bagchi is the toast of Bollywood. The young gun from Central Avenue has given a fresh spin to iconic hits, with The humma song (OK Jaanu), Tamma tamma again (Badrinath ki Dulhania) and Tu cheez badi hai mast mast (Machine) dominating both playlists and nightclub sets. 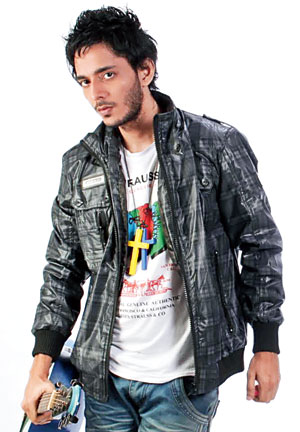 He studied at Frank Anthony Public School and Scottish Church College and took his first steps as a musician playing at various city college fests. Today, Tanishk Bagchi is the toast of Bollywood. The young gun from Central Avenue has given a fresh spin to iconic hits, with The humma song (OK Jaanu), Tamma tamma again (Badrinath ki Dulhania) and Tu cheez badi hai mast mast (Machine) dominating both playlists and nightclub sets.

t2 caught up with Tanishk — who also gave us the soulful Kapoor & Sons hit Bolna and the hatke Tanu Weds Manu Returns chartbuster Banno tera swagger — to know the man behind the music.

You are Bollywood’s music man of the moment. Does it all feel surreal?

It feels heavy, ya! (Laughs) There’s too much on my head right now… lot of challenges coming up.

Yes, definitely. I didn’t expect this much to happen… it’s a blessing, I would say. But I had the right intentions about my career right from the start. I always knew that whatever I did, I would do to the best of my ability, and out of the box. Now when I am being appreciated, I feel I have followed the right path.

Growing up in Calcutta, did you always want to be a musician?

Music was generally always the focus. My dad (Nandakumar Bagchi who worked with RD Burman and Salil Choudhury) and mom (Sharmistha Das) are both into music professionally and I started out wanting to do the same. But later, I realised that music can’t be a priority because it wouldn’t help me earn and I wanted to do something that was much more promising in terms of money. Then I wanted to become a pilot and also worked hard towards it.

But one day I realised that music is where my calling is. I decided to carry forward my parents’ dream because they always wanted me to become a musician. I thought, ‘Chalo… let’s at least try and monetise my skills through music only’. My parents have been a big support to me. They told me to do whatever I wanted to. Even today, whatever I compose, I first play it to my mom and dad and take their feedback. They keep telling me that as long as I am composing honestly and people are enjoying my music, it’s all good.

So when and how did it all start?

I learnt music from my parents and did my first stage show when I was eight. My music career actually started from my college days and I performed in most of the colleges in Calcutta. I won a lot of awards in fests and fresher’s events. But my career actually took off when I started doing shows outside college. Then I moved on to arranging my own music with my dad. When I finally moved to Mumbai, things started rolling… so it’s been quite a journey.

Banno tera swagger from Tanu Weds Manu Returns was your first big break. How did that happen?

When I was composing music for ad jingles, I decided to try my hand at a single. At that time, a lot of singles were coming up on YouTube. I teamed up with a guy called Vayu Srivastava — he’s a very good writer — and we recorded a song (as Tanishk-Vayu) called Oopar oopar renn de and released it on the Net without any expectations. Anurag Kashyap heard the track and he liked it because he hadn’t heard such lyrics (Sample: Ghaas-phoos pe loat rahaa hoon/ Dhansa dhansa jaata hoon/ Jeevan kaisa joke hai saala/ Hansa hansa jaata hoon) before. Through him, we met someone called Ravi Adhikari who was very close to Aanand Sir (L. Rai, the director of Tanu Weds Manu Returns).
Aanand Sir called for us and said, ‘There’s a song called Banno, but I want a peppier version’, and that’s how Banno tera swagger was born. He loved it and that’s how the song was used in the film.

I got the opportunity to compose for OK Jaanu and it was a huge high that (A.R.) Rahman Sir suggested my name and said he wanted me to compose a song with Badshah. I have always been a fan of Rahman Sir and he had heard Banno and liked it a lot. Doing The humma song was a huge opportunity for me because working on such an iconic Rahman number and presenting it in a whole new different way was a very big responsibility on me. The fact that people have loved the song so much… that it’s been the most requested song at nightclubs for so many months now… shows how popular it still is.

For Tamma tamma again, Varun (Dhawan), who I am quite close to, wanted me to compose a song for Badrinath ki Dulhania and there was already a kind of comfort with the Dharma (Productions) guys because I had worked with Karan (Johar) Sir in Kapoor & Sons. They are very open-minded and are always on the lookout for new talent. I decided to give a new spin to Tamma tamma (from the Sanjay Dutt-Madhuri Dixit 1990 film Thanedaar) because it’s a song that’s timeless… even if you play the original version in nightclubs today, people will get up and dance.

I know there has been criticism, but I am someone who completely shuts out negativity. On iTunes, the first three songs are mine… that doesn’t happen to too many composers! I have a set of friends who react positively to my music, and that’s enough for me. I am connected to almost everybody in the music circle. I have a Bengali circle also… I am close to Ash (King). Nakash (Aziz) is a good friend and so is Varun Dhawan.

I want to do everything that can be done in Bollywood music! Nowadays, you will find many Bollywood films with multiple composers which I feel is a good thing because it lends variety to an album. I want to be a versatile musician and create five-six songs that should dominate the music charts simultaneously, but people should feel that they have been scored by five different composers. I am doing films in which there are multiple composers and I have my first solo film (with Aanand L. Rai) as composer coming up. So yes, I am trying to do everything.

Actually, my main aim now is to put Bollywood music back into the nightclubs. Even till last year, people would listen to English songs in a disc… even on a ‘Bollywood night’, English music would be played. When it came to The humma song and Tamma tamma again, my intention was to bring the old melodies to the new generation with a whole new set of beats. That’s what has happened… people are enjoying my music… they are dancing to it…. My fans keep sending me videos of people dancing to The humma song and Tamma tamma again at marriages and nightclubs…. My goal is to take Bolly music global.... I am trying to collaborate with big international DJs like Skrillex, Marshmello and Kygo. Bolly music has to go places!

Priyanka Roy
Did you know Tanishk in school or college? Tell t2@abp.in