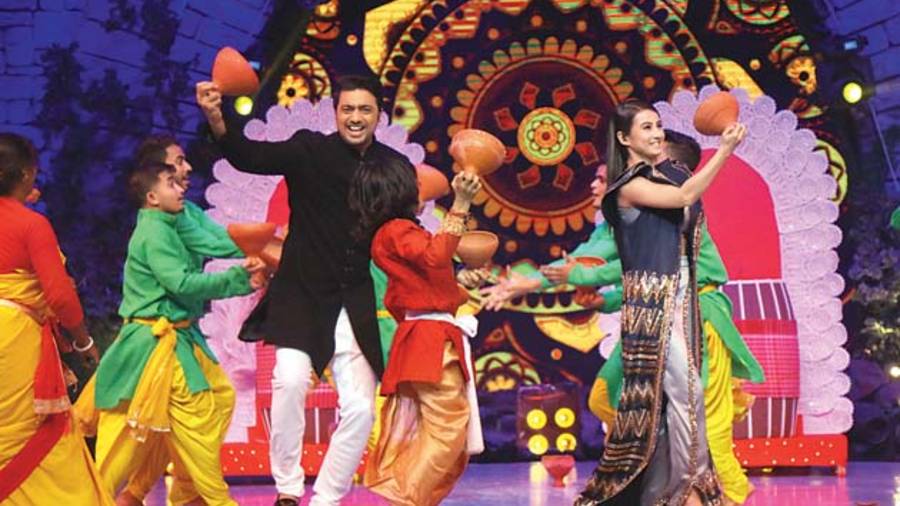 New episodes of the Star Jalsha show Dance Dance Junior Season 2 turn the spotlight on Bengal’s folk and festival dance forms in an entirely new light. From the joyous dance of Nabanna Utsav to a unique performance on the tune of Malla’ der gaan, the stage brings alive the rich cultural heritage of Bengal, which is acclaimed the world over. These special Banglar Joyogaan episodes feature a stellar performance by the traditional Raibeshe dancers, who bring alive ‘Raibeshe’, “a lost martial art form of Birbhum, Bardhaman and Murshidabad”. The episodes also feature dazzling performances on Gajon Utsav and the very famous Pahaar er Chaa-bari dance. The very best of Bengal’s favourite Dhunuchi Nritya, Bratachari Nritya and the ever popular Rabindra Nritya are also there. The power-packed Chhau dance performance is the added attraction.

Speaking on this occasion, Subhankar Chattopadhyay, the producer and director of the show, said: “Banglaar Joyogaan — the special two episodes of Dance Dance Jr. Season 2 is a very colourful portrayal of Bengal and its rich cultural heritage. The junior participants brimmed with energy, power and enthusiasm while showcasing their special performances based on Bengal’s folk and dance forms while the judges Dev and Monami (in picture left) were in complete awe witnessing each special act. Mahaguru Mithun Chakraborty was ecstatic by the performances, which added uniqueness to MG’s favourite Bengal’s folk dance forms.”

The channel spokesperson said: “In this difficult and depressing time of the pandemic, Banglar Joyogaan special episodes of DDJ Season 2 created some beautiful and mesmerising memories which will be etched in the minds of our audience for a long time.” Catch the episodes on Disney+ Hotstar.