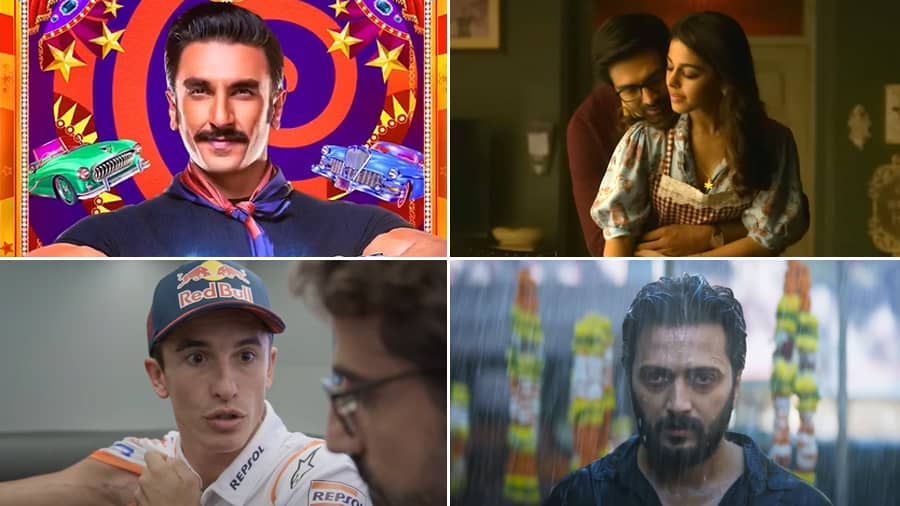 In the short clip, several of the actors mentioned above appear in different get-ups. The film is based on William Shakespeare’s Comedy of Errors. Ranveer will play dual roles in the film. The 37-year-old actor shared the clip with the caption “Before the trailer drops next week, meet our CIRKUS family!!!”

Cirkus will hit the cinemas on December 23.

In the 30-second-long teaser, we see Freddy (Kartik) and Alay F’s character getting married. However, their married life is not as rosy as it seemed. Kartik’s character works as a dentist during the day and is shown dragging a corpse into the woods at night.

Freddy will be streaming on Disney+Hotstar from December 2.

Mumbai Film Company has released the official teaser of its upcoming Marathi film Ved. It marks the feature directorial debut of Riteish Vilasrao Deshmukh, who also stars in the film alongside his wife, Genelia Deshmukh, in lead roles. The film also features Jiya Shankar, Ashok Saraf and Shubhankar Tawde.

The teaser opens with visuals of Mumbai city and a distraught Riteish lying on the beach as waves wash over him. At the end of the clip, we are introduced to Genelia’s character.

Ved is scheduled to release on December 30.

Marc Márquez: ALL IN

The trailer shows that it’s been three seasons of injury struggles, surgery and recovery for the eight-time World Champion. The documentary chronicles Marquez’s journey as he moves to Madrid to continue his recovery and then returns to MotoGP in 2022.

Marc Márquez: ALL INI will be streaming on Amazon Prime Video in February 2023.