Advertisement
Home / Entertainment / Changing with the times, being relevant and finding a balance are priority for Dev and Rukmini Maitra

Changing with the times, being relevant and finding a balance are priority for Dev and Rukmini Maitra

It’s Sunday, and Team Kabir are on the final leg of their promotions. Dev and Rukmini Maitra look cool and confident. “Dev Entertainment Ventures will be doing a premiere for the first time. I loved the film, and I want to show it to my industry people, ” said Dev. “It is a really fast-paced film. Don’t even miss the first shot of the film, because everything is connected to the other,” added Rukmini. Kabir, which releases today, is directed by Aniket Chattopadhyay. A t2 chat... 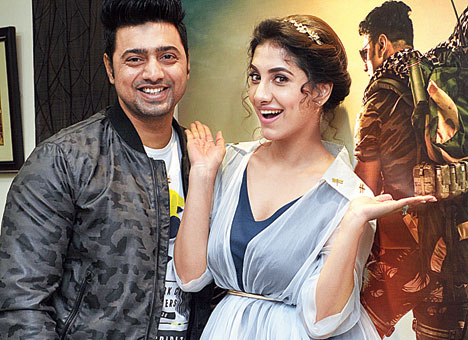 It’s Sunday, and Team Kabir are on the final leg of their promotions. Dev and Rukmini Maitra look cool and confident. “Dev Entertainment Ventures will be doing a premiere for the first time. I loved the film, and I want to show it to my industry people, ” said Dev. “It is a really fast-paced film. Don’t even miss the first shot of the film, because everything is connected to the other,” added Rukmini. Kabir, which releases today, is directed by Aniket Chattopadhyay. A t2 chat...

Dev, why did you decide to play a negative character — a terrorist — in the thriller Kabir?

It would have been easy for me to do another masala film. But when it comes to cinema I feel the whole world is changing. Different kinds of films are happening often based on real characters. Initially I was sceptical as a producer since it deals with a sensitive subject.  And I haven’t played a character like this before. We did a lot of workshops for this. I have these long dialogue scenes and also a lot of Urdu words.

Was there a risk?

The audience are receptive and just want to see meaningful films with good content. And if you have to play a negative character for the sake of a film, then it’s okay. As an actor, I felt the need to explore.

Have you ever got an offer to play a negative character?

We get very few opportunities to explore this. I played a mute character in Zulfiqar and that was an experiment for me. The film had the best from Tollywood. Before that I had done Bunohaans. I played a boxer in Chaamp. So I have been experimenting with my roles, but we don’t get a lot of scope to do so here.

Rukmini, what is Yasmin doing in Kabir?

I don’t think any heroine has attempted a character like this in the mainstream format. And even if I don’t do any more movies after this, I’ll have no regrets. The best part is that my character is on a par with all the other male counterparts in the film. That balance is so important in today’s times.

Yasmin is a reserved, layered character. She is an introvert. She will have a conversation with you depending on how much she needs out of you. Once her job is done she really is not bothered. She has seen so much in life that, for her, it is better to be closed than be open to people, and emotions, and energy. And this is a complete contradiction to who I am as a person. I am very welcoming. I am open to talking to people, open to vibes. People think that I am a happy-go-lucky person but Yasmin is nothing like that. Aniketda had told me to wipe the happiness from my eyes. She has been through so much.

A train journey forms a major part of Kabir. How did you shoot the train scenes?

Dev: In the film a group of terrorists takes over a compartment of a train. I am there. Yasmin is one of the passengers. First, we went to do a location recce in Bombay… and we took a train from Calcutta. The plan was to fly back to Calcutta. We started figuring out the train space and then we started acting. Suddenly, a train passed ours. And the light inside the compartment changed. The sun set… we went ahead with our markings… the compartment, seats, how the source of light was changing. In Bombay, Hari (cinematographer) only suggested that we shoot inside a train. The play of light inside the train was fascinating. We cancelled the flight and returned by train.
Rukmini: Dev used to carry a diary with notes, detailing the requirements for every shot. (Turning to Dev) Did you write down any budgets in the diary?
Dev: No.
Rukmini: Food bills, my food bills?
Dev: No. To make a good film you have to spend. Also, I made notes of when the train would get into a  tunnel… we would plan scenes accordingly.
Rukmini: But you know something, none of this worked for us. Everything went haywire.
How many cameras did you have inside the train?
Dev: One, and my iPhone… fight scenes inside the washroom were shot on my iPhone.
Rukmini: Tar aage we fought about who will give their iPhone! Aniketda is like, ‘My phone doesn’t have a great resolution, let me see yours!’
Dev: Finally we decided we’d shoot from Bombay to Calcutta.

How did Rukmini react when she got to know about the train shoot?

Dev: She was cool.
Rukmini: I had two small demands. To arrange for food... and I carried a bagful of goodies. And to have my own washroom, which I got! I have major OCD and carried 20 bottles of sanitisers.

How did everything go on the day of the shoot on the train? Was there a glitch?

Dev: On D-Day, we were ready.  We were supposed to board at 4.30pm, but the train was late and we ended up boarding the train at 8.30pm. So our calculations and timing went all haywire.
Rukmini: We had three compartments on the train, but bogey ulto lagano holo and the source of light changed.
Dev: We had to change our dialogues to fit in the delay bit, and also other scenes…. But that’s how we understood the importance of workshops.
Rukmini: We shot around 40-42 hours on the train.
Dev: We were like zombies when the shoot got over.
Dev, you wear the same shirt throughout the film? That must be a first?
Dev: Yeah, with a tee inside. That’s my character. He is not bothered about what he wears. I also put on weight. I can’t look like a hero. We decided on a check shirt and brainstormed on the colour.

Rukmini, you recently said that you are looking forward to a day in the film business when a heroine’s face is on a tee shirt, and the movie still sells. Can you elaborate?

Rukmini: I would want to be a part of a film, or watch a film where the title of the film will be based on the heroine’s name... her face will be on the tee shirt. And the movie still sells. Where an interview of a heroine will be about her struggles, her efforts, her journey, and not who she is related to, or her personal life. Things are changing… Dev has given me pivotal roles to play in three films.

How is Aniket as a director?

Dev: He is a fantastic storyteller.  After Kabir, he’ll be taken as a serious director... because of the way he has written the story.
Rukmini: He answered everything we asked him. His homework is excellent.

Rukmini, you have done three films with Dev. How do you think he has grown with each film?

Rukmini: He doesn’t compromise as a producer, and is non-negotiable when it comes to promotions. He will go all out for promotions. If you give him a reason, he’ll give everything to you. His quality control is excellent as a producer.  Also, he doesn’t shy away from casting debutantes. And coming to him as an actor… after watching Kabir, I just held his hand and told him, ‘Dev, I am loving you in this film.’ Also, he has stopped helping me (laughs). Dev has a super screen presence.  For a star like him, the biggest challenge is to be unnoticeable. But he has managed to do that in Kabir… to me that was wow. He didn’t want a ceeti-taali moment.

Dev: The film doesn’t need a star. I just became the character. I have been in the industry for 12 years. I have seen it all. You have to keep changing yourself with the times. Otherwise the audience will change the heroes and get someone new.

Dev, Chaamp, your first film as a producer, released in June last year. What are some of the lessons learnt?

Dev: Don’t think short term! And brand building is more important than profit.
Rukmini: Don’t compromise on quality!… And Rukmini is the best co-star Dev has ever had (goes LOL).
Arindam Chatterjee

What do you think of Dev’s experiments with his roles?
Tell t2@abp.in