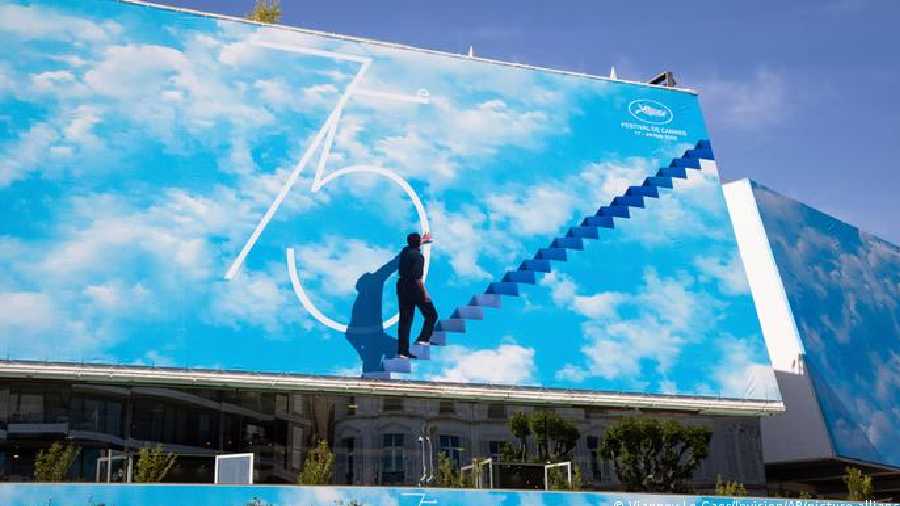 To provide glamour and still be political: that has always been the claim of the most important European film festival in Cannes.

In times of war in Europe, a special guest appealed to the filmmakers and actors on the opening night of the 75th Cannes Film Festival to remember their medium's past contributions in troubled times. The prerecorded message from Ukrainian President Volodymyr Zelensky received a standing ovation.

"Will cinema keep quiet, or will it speak up? If there is a dictator, if there is a war for freedom, once again, everything depends on our unity. Can cinema stay outside of this unity?" Zelensky said.

The Ukrainian leader called on a new generation of filmmakers to confront dictators as Charlie Chaplin mocked Adolf Hitler in "The Great Dictator" in 1940.

"We need a new Chaplin to prove today that cinema is not mute," he said.

This year, the Cannes Film Festival is not receiving any official Russian delegations.

However, artistic director Thierry Fremaux had reserved the right to include Russian filmmakers in the program.

Russian filmmaker Kirill Serebrennikov has been invited to the competition with his film "Tchaikovsky's Wife." He had not received any Russian state funding, Fremaux argued.

This is the third time Serebrennikov has been at Cannes. The Russian, who was under house arrest in his native country for two years, now lives in Germany. The biographical film recounts an episode from the life of the world-famous Russian composer, Pyotr Tchaikovsky, who, afraid of coming out as homosexual, married a young woman who was in love with him. His choice resulted in a tumultuous marriage and her descent into madness.

Return of the acclaimed

"Tchaikovsky's Wife" is in the running for the Palme d'Or, the top award, with 20 other films, of which four are directed by women. Among the directors are many returnees who have already won the prestigious prize. Canadian veteran David Cronenberg, for example, makes his highly anticipated comeback with "Crimes of the Future," featuring Lea Seydoux, Viggo Mortensen and Kristen Stewart in leading roles. The science fiction horror film is set in a future world where the biological makeup of humans can be altered by advanced technologies.

Other previous winners include Belgian brothers duo Jean-Pierre and Luc Dardenne, Swedish director Ruben Östlund, Japan's Hirokazu Kore-eda, who won the 2018 Palme d'Or for "Shoplifters," and Romania's Cristian Mungiu. South Korean director Park Chan-wook has also been honored twice at Cannes with the Jury Prize. His competition film this time is called "Decision to Leave" and is a mystery thriller.

"Armageddon Time" boasts a star-studded cast. The film, by American filmmaker James Gray, is set during the election period of former US President Ronald Reagan in the 1980s. Anne Hathaway and Anthony Hopkins play the main roles. The director has already been invited to Cannes five times, but has so far come away empty-handed.

There's no shortage of gruesome films to watch this year, starting with the opening film "Coupez!", a zombie comedy by "The Artist" director Michel Hazanavicius. Translated as "Cut!" — a wordplay on what film directors often shout at the end of a take — the film is about film craft and vampirism. Originally titled "Z (comme Z)," the film was renamed because the letter 'Z' could be associated with the symbol used by Russia in its war in Ukraine.

The thriller "Holy Spider," an entry by Iranian director Ali Abbasi, shares its eerie mood. A man known as the "Spider Killer" wreaks havoc in the holy Iranian city of Mashhad by murdering prostitutes, in what he sees as his divine mission.

The premiers of several films not in the competition will also add to the festival's glamour quotient. There is the sequel to the cult 1986 action film "Top Gun," starring Tom Cruise, and Australian director Baz Luhrmann's highly anticipated biopic of the King of Rock'n'Roll, titled "Elvis." US actor Austin Butler plays the young Elvis, while Tom Hanks plays his equally legendary manager.

Europe and its migration history

A lack of representation from Africa is woefully evident, with no competition entries from the entire continent. Yet, some directors have dedicated themselves to the topics of colonialism, migration and racism. The Belgian Dardenne brothers present "Tori and Lokita", a drama about two young migrants from Africa, with Joely Mbundu and Pablo Schils playing the main roles.

In "Mother and Son," French director Leonor Serraille tells the story of Rose and her two sons, Ernest and Jean, who emigrate from the Ivory Coast to Paris in 1986. The film follows the family until 2010, showing how they grow together but also almost break apart. Catalan video artist Albert Serra's work "Pacifiction — Tourment sur les iles" is set in French Polynesia and focuses on the conflicts between the French establishment and the local population.

Cristian Mungiu's competition entry could be instructive for understanding racism. His drama "R.M.N." unfolds in a village community in Transylvania. After an influx of foreign factory workers, racist prejudices take over. A disturbing melange of fears, frustrations, conflicts and passions break out.

In early March, the film festival announced that it would exclude Russian delegations from participating until Russia's ceased its invasion under conditions that satisfied the Ukrainian people. And indeed, no official Russian representatives, filmmakers, film critics or journalists have been invited to the event this year. The fact that Kirill Serebrennikov is now taking part in the competition softens this hard stance only slightly.

Generally, the ban precludes people like renowned Russian film critic Andrei Plakhov, from Lviv, from attending the event. However, he as reacted with aplomb. "Perhaps we really need to understand what it is to be a citizen of an aggressor country," he wrote in a public statement on his Facebook page.

Not everyone in Ukraine shares the "zero tolerance" policy toward everything Russian, however. For example, Sergei Loznitsa, arguably Ukraine's most renowned filmmaker, spoke out against the blanket boycott of Russian films in March.

"What's going on is terrible," he said in an interview with Variety. "But I appeal to everyone not to go into a frenzy. We need to judge people not by their passports, but by their actions." That position earned Loznitsa an expulsion from Ukraine's National Film Academy, which was founded in 2017. At Cannes, his film "The Natural History of Destruction" is screening as a special out-of-competition entry.

Filming on the front

The film "Mariupolis 2" by Mantas Kvedaravicius will also be shown in Cannes just weeks after the Lithuanian director was murdered by the Russian army in Mariupol in April. His fiancee, Hanna Bilobrova, who was on location with him, was able to secure the footage that had already been shot.

Together with Kvedaravicius' editor Dounia Sichov, the team created a harrowing, highly topical contemporary testimony. Festival organizers announced that was absolutely essential to present "Mariupolis 2" at Cannes, which was why the film was added to the program only recently and will premiere on May 19.

In one of the festival's side programs, "Un Certain Regard" ("A Special Look"), another film is attracting attention, namely, "Vision of a Butterfly" by young Ukrainian director Maksym Nakonechnyi. Completed before the war, the film tells a "harsh surrealist story of a warrior, the pilot Lilja, who desperately tries to return to her normal life after the experience of captivity," according to the director.

"Unfortunately, my film was probably a premonition of war," Nakonechnyi said. Since the start of the Russian invasion, he has now been on the front lines — with his gun and camera. "I want to make a documentary out of this," he said.