Actress, eager for a superhero role, reveals she would quit if she doesn’t enjoy work 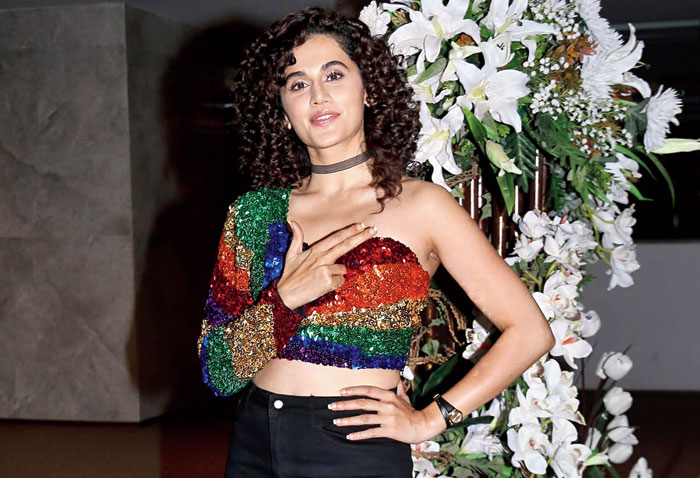 Taapsee Pannu, who’s had four releases this year, has been signing films on her own terms but the actress is not averse to doing a film like Judwaa 2 if offered again.

Speaking at the MasterClass during the ongoing IFFI in Goa, Taapsee spoke on how she loves superhero films. “I want to play an Indian superhero in Avengers. I love Robert Downey Jr. And I would do a Krrish if it was offered to me.”

Elaborating on her film choices, Taapsee said: “When I said yes to films like Soorma and Mission Mangal, they are Diljit Dosanjh and Akshay Kumar-Vidya Balan’s films. I knew they aren’t my films but I believed that people will remember me after they walk out of the theatres. For me, screen time doesn’t matter — if someone offers me a small but significant role, if my character beings about a change in the narrative, I’ll take it up.”

The Saand Ki Aankh actress, who will be seen next year in Anubhav Sinha’s Thappad, called the upcoming film a huge task. It’s an ode to Indian women and explores gender dynamics in relationships. she said.

“Thappad is about those said-unsaid things women are supposed to do. For years we have been living like that. It raises questions like ‘why women need to be a certain way?’ I’m playing this average Indian woman, who is also taught to be a certain way.

“The biggest challenge for me and Anubhav sir was how to rip that fiery image off me because audiences are used to seeing me doing something radical,” she said about the film, releasing on March 6, 2020, on the sidelines of IFFI.

The 32-year-old said she discussed the idea with Anubhav during Mulk promotions but playing Amrita was a “claustrophobic” experience. “There were a lot of times when I instinctively reacted in a scene as the real Taapsee would. But I was stopped there,” she added.

She revealed to having a “short fuse” in college but added that her anger management has become better since doing films. She said: “I am still very moody and that is thanks to my profession. I think all actors are moody. I have now developed a patience for nonsense stuff.”

For Taapsee though life is not just about films. She has other businesses as well, for example the wedding planning company with her sister.

The actress added she would quit if she does not enjoying working in films: “There is no point dragging myself out of bed to get to work. If I am not enjoying my work. I will stop doing it and take up something else, and the audience will also realise she is not enjoying her work and it will show on screen.”