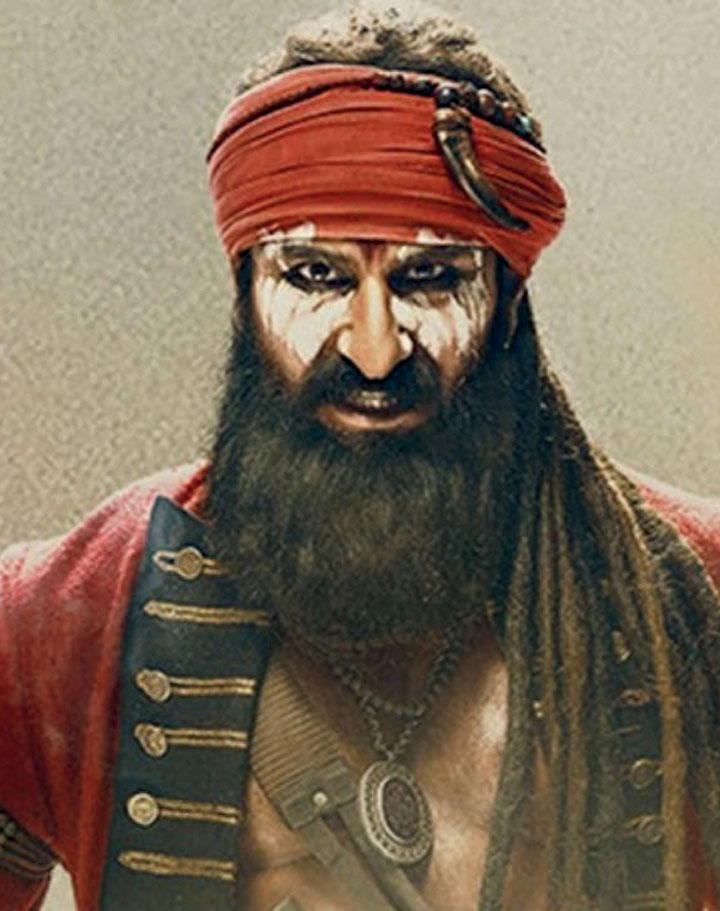 Friday film Laal Kaptaan marries two of Saif Ali Khan’s favourite things — history and films. “There was no way I could say no to this film,” said Saif when t2 met the 49-year-old actor recently at a studio in the leafy bylanes of Bandra in Mumbai. It’s still early in the day so his man-Friday hands him a venti cup of coffee before we sit down to talk about his latest release that required him to channel his inner wolf, the tepid response to the second season of Sacred Games and if his son Ibrahim is ready for his Bollywood launch.

In an interview you had said that when director Navdeep Singh came to you with the script of Laal Kaptaan, you thought it was crazy.

Hmmm… actually, I didn’t think it was crazy at all. The original title of the film was ‘The Hunter, the tracker, the widow and the hanging tree’. That caught my eye immediately because these are all elements of the kind of story I would love. And I’ve always wanted to do a film that’s historical with medieval torture and drama, with blindings and hangings, and horses and swords. Done well, you end up with Game of Thrones. A part of what an educated mind can do is to bring historical stories that are really dramatic and things that are lost, which people don’t know about, for public consumption in an interesting way.

It is! That’s the part I thought I wouldn’t have the energy for, because it took a really long time to dress up like that character. To do that every day in various places is exhausting, but also really exciting to go through. There were some extreme locations in Rajasthan and Chambal. To swim in crocodile infested rivers... there was crazy stuff we were supposed to do. You have to do crazy stuff when you have a small budget and you’ve got to try and pull off something epic. You have to rely on human exploitation, whether its’s the assistant directors, the crew, the actor, the director (laughs). We all had to push ourselves beyond what would be humane because we didn’t have the money to do this the way it should be done, keeping human comfort in mind.

The character seems to be very out there and unlike anything you’ve done before. Did getting into the look help you find him?

Yeah of course, the outfit helps and the look helps. Ideally, you have to find it from within but sometimes even external things help. It took a long time though, there was some growth required before I could get there. And I don’t know how it happened — it happened on the outdoor — because I wasn’t that kind of actor before and I had to quickly become one. The best way to do it is to jump in and sink or swim really, by doing a scene. We didn’t start with a scene though, so I was a bit lost. We started with easy riding shots but I was asking myself, ‘Easy riding shots as who?!’ It’s only when you start talking that you realise that something doesn’t sound right. The minute you do a scene in character, it’s the best rehearsal. Till then, it’s all concepts in your head, which can be quite confusing.

He’s like a wolf, like an animal. He’s a human being who’s been so buffeted by the forces of nature and his life, and he comes from such a wild time, that he’s a wild kind of person. There’s also something that’s happened that the story deals with, which is a blurring line between supernatural and reality. He’s a bit of a ghost in that sense. It’s a very cinematic thing, like a graphic novel. He’s like an Indian superhero, so he’s a swordsman and a mystic. Swordsmen, a lot of times, have had some kind of a mystical quality in films where their ability can become supernatural. That, plus the sadhu angle... there’s something very Indian about it. It’s set in a really interesting time in the 1700s when the Mughal empire is collapsing and the British empire is coming in and consolidating. It’s a time of anarchy, there are a lot of hired guns and mercenaries, people going back and forth. I wish I could see more films on that time because it was a really tough time but colourful as well.

Is this the toughest of all the films you’ve made?

By far the toughest. Nothing’s come close and nothing will ever come close because nobody’s as crazy as Navdeep. That’s just the way it is. To do make-up for a couple of hours, cover yourself in blood and dust and have all these flies sitting on you and then to drive to location through bone-crunching fields. There is one sequence where my character is being dragged behind a cart. I had to walk barefeet in the sand. We’d start shooting early mornings but by 10-11am walking barefoot on sand in Rajasthan... sheer madness. My feet were bleeding by the time we finished shooting that bit. It was just exhausting and all I could think about at the end of every schedule was whisky and Chinese food because I wanted to reward myself with some earthly pleasures! And like a wild animal, when I came back (to Mumbai) I found it quite difficult to adjust to city life after this shoot.

It messed with your head?

Yeah, one adapts quickly to wide open spaces and nature. And when you come back to a crowded city, you’re just wondering whether that’s the best way to live. You realise that these habits are a bit strange... soft beds and whatever.

Of course, there were comforts everywhere in Rajasthan.

You’ve always tried to strike a balance between being saleable as an actor by doing commercial films and also making the kind of films that suit your sensibility. Would it be correct to say that you’re now veering more towards one of these?

I feel maybe I’ve been doing the wrong kind of movies. Box-office success hasn’t been concerning me like it should because I’m getting paid and the producer is making the film. But something like this film had to be made by me... I was not free to say ‘no’ just by virtue of my upbringing, my experiences and my exposure to the things I’ve chosen to read. The way my brain is made, I had to say ‘yes’ and I had to be part of this. It’s a pretty competitive line of work with the best offers going to the most saleable people. So, sometimes you make the best of what you have on your plate. Rather than do something as a struggle to be commercial, I would do something as a struggle to be artistic. At least, it’s intellectually safer. There’s that and now I want to concentrate a little on it. I’m hoping an interesting filmmaker would say ‘He’s really good at this, so let’s try this’. And I hope Bhoot Police (co-starring Ali Fazal and Fatima Sana Shaikh) is precisely that kind of movie.

Is it freeing to not have to worry that much about box office?

I don’t want to worry. I don’t think it’s very good to worry about anything. Who cares, let’s see what happens. Hopefully, if you know your job, things pan out in a certain way. It’s been panning out in some way or the other for the past 30 years. You may not have the biggest film or the most successful film, but I’m quite happy. I’ve got a job, I’m looking after my family and everything is okay. The ups and downs will go. I’d be lying if I said I’m not losing sleep over it though... we need to do something that’s both relevant and commercial. That’s not about box office though, thats’s more a function of age. When you’re 30, it doesn’t bother you. But I’m almost 50, I might run out of time or I don’t know how relevant this is. I suddenly hear myself talking at times and I feel like I’m giving a lecture on history! (Laughs)

The second season of your Netflix show Sacred Games was disappointing…

It was disappointing but artistically, the way it was shot and the way the character (Sartaj Singh) turns out... I had a blast. And we did some crazy stuff. Neeraj (Ghaywan, director) was also very good. But generally, the ‘sacred’ in that ‘game’ was that Guru (played by Pankaj Tripathi) and I think people just lost a bit of interest in that part... it got a bit weird. So, whatever (shrugs).

And, you’re in talks to do another web show?

Your son Ibrahim is on the cover of Hello magazine. It’s pretty much how your daughter Sara announced that she’d be interested in films. So, is he ready?

I don’t know if he’s ready but he’s interested. It would be nice if he went to college but if he’s not inclined that way like a lot of people in this industry weren’t, myself included, then I don’t think I should get upset about it like my parents did. The world has changed. You don’t give kids a hard time now because they’re not becoming lawyers or not getting academically excited. There are many things you can do, provided you earn your place in this world. That’s the bottomline... if you earn your place and contribute something, that’s it. Let’s see what he does. Of course, Ibrahim has a head start on Sara... he’s already done a movie before her... Tashan (laughs). Like he says, ‘It went flop’.

What’s it like seeing Sara go through the same paces as you?

I don’t know. There’s some dull sensation that time has gone by really fast. It’s life and an ongoing thing. I can’t believe she’s grown up so quickly, I suppose.

Not every parent sees their kid go through similar experiences, though?

I believe the paparazzi have stopped hanging outside your building to click your son Taimur’s photos...

They’ve left the building. Congratulations to them for showing some class and letting the kid be, which is really cool.

Did you talk to them?

I did talk to them also. My father told me once about equanimity... to treat people the same, so that nobody has the edge there. One of them said, ‘Listen we don’t mind as long as that other chap isn’t here as well’. So, I said obviously, and if it applies to everyone then it’s okay. That was the issue.