Anindita Bose on her character arc in Paatal Lok

Anindita Bose on her character, Chanda, in Paatal Lok, getting a compliment from Ranveer Singh and working with a fave actor 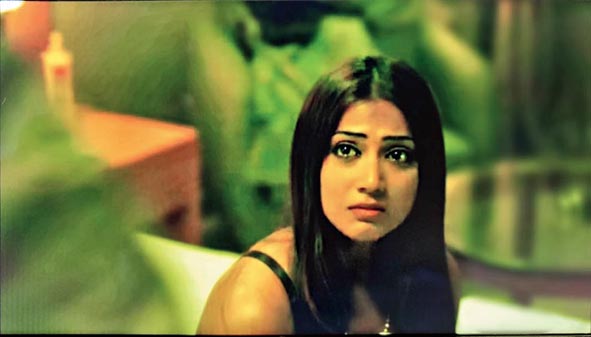 Anindita Bose has been receiving a lot of praise for her performance in the Amazon Prime Video series Paatal Lok. “The feedback so far has been extremely gratifying. I’m not good at receiving and responding to compliments, so this whole experience has been quite overwhelming,” smiles Anindita. A chat...

What’s the best compliment you have received till now?

The best compliment one can get is from their family because they’re usually the most critical about one’s work, for the better. When my parents, Saurav (Anindita’s boyfriend) and my sisters saw the show, they only had good things to say about the show and thought that I did exceptionally well in the limited screen time I got. They’re all very proud and that brought a big, bright smile on my face.

Secondly, I received a lot of messages from the folks of B-town. They all reached out to congratulate and appreciate my work. One incident that was pretty cool was when Abhishek Banerjee was doing a live session on his Instagram and I popped in to say ‘hi’ and make some friendly jokes. That’s when I saw Ranveer Singh commenting on the live session and raving about Hathoda Tyagi’s work and then suddenly, ‘Anindita Bose you were awesome!’ popped up. I was in shock and couldn’t believe it. I knew he had seen the show but the fact that he remembered my role and name was the cherry on the cake!

How did you land the role of Chanda? Was it through an audition?

It was the usual process. Abhishek Banerjee called me and told me there was an audition for a big web show. I flew in to Bombay in the next few days. I gave my audition in the morning and the same evening he called to tell me that I was locked.

What was the brief from the directors?

After I was locked for the role of Chanda, I was asked to come for a meeting with Prosit (Roy), Avinash (Arun) and Sudip sir (Sharma; writer) at the Clean Slate Films office. At first they introduced the character and background to me. I had read the script for the episode by then and I really wanted to clarify if she was a con woman or was she someone who had just fallen prey to the political games. To this their brief to me was that she knew exactly what she was doing, she’s an opportunist and she is a survivor. There should be an air of mystery to her — for everyone viewing to question if she is in fact the damsel in distress or if she’s the bad wolf. That’s the brief I got from them — to keep Chanda in the grey zone.

How did you see your character and how did you want to play her?

Keeping their brief in mind, I wanted to just go with it. It was so beautifully written and Chanda was kept as a looming figure from the start of the show. When everything was planned so well and written to stone, all there is to do then is to execute it to meet that expectation. I remember that after my audition they’d told me that they liked my audition so much that they wanted me to play the character exactly like that. And, that’s what I did.

Also, at the core she has this deep sense of loss...

See, that’s the beauty of the script. Even though everyone by the end sees her as someone who is a con woman, there’s deep sympathy towards her. I think that’s what makes her so real. No one in the world is the devil or the angel — these are just labels given to people based on part of their actions in the society. Chanda functions from the space of empathy and her past experiences, maybe that’s why you can see the loss and pain in her eyes.

In the restaurant scene, bureaucrat Shuklaji’s wife says that they are in Calcutta. Where did you actually shoot it?

We shot the whole sequence in Bombay. Chanda has come to the restaurant to treat her family to a lovely meal but that pleasant evening gets disrupted because of Chaku’s incessant calling. After she finally answers his call, she is scared to learn that he’s in Calcutta outside her house and feels helpless. She knows what he’s capable of doing and how he reacts when he’s riled up.

There is a sense of irony and melancholy at the end of that restaurant scene where a group of diners break into applause as Tope Singh/Chaku shouts at Chanda over the phone and she is in tears. What’s your take on the moment?

This is actually a beautiful question. This scene is, again, a reality of life. Chanda till then was a part of Chaku’s life but is now trying to desperately come out of it. She’s in an expensive restaurant, trying to do better for herself. This is what the show is about too — the distinction between paatal, dharti and swarg lok. So far Chanda was a part of paatal lok but now she wants to be a part of dharti lok. The juxtaposition of her conversation with the applause in the restaurant is a metaphor for her perilous bonds to paatal lok aka Tope Singh with that of the perks of dharti lok aka Shuklaji. As much as she cares for Tope Singh, she wants to move on. It’s this heartbreak, confusion, and like you mentioned, the melancholy of her life that leads Chanda to make the decisions she makes further in the episode.

Tell us about the hotel room scene. How did you prepare for it?

That was actually the first scene I shot for. What I really wanted to do before we dived into that scene was have a one-on-one rehearsal with Jaideep (Ahlawat) and the director. He was really kind about it and sat with me to rehearse the lines over and over again. Prosit sir and Sudip sir were also around for the run-throughs and tweaked a few things while we did that. Once I was confident, we moved to the bedroom and almost choreographed how the scene would go, like where we’d be sitting, how I’d be holding the bedsheet. It was all done very organically and respectfully.

Also, you were reciting these lines from a poem during an intimate scene. How did you strike that balance so that the scene remains true?

I thought that was beautiful — the fact that she was reciting a poem. For the people who have seen the show, they know that that is how Shuklaji and Chanda first meet. She was writing a poem, he notices and sings a song that he had written himself. That’s how they made their connection. Poetry was their ultimate romantic pleasure. I think understanding that aspect helped to maintain the balance through the scene, but the real credit goes to Sudip sir for the way it was written. He kept the balance!

How was your experience of shooting with Jaideep Ahlawat?

I have a wish list of actors, directors, projects that I want to someday be a part of. Jaideep was on my list and now I can happily tick it off the list. In the Bombay fraternity I am a newcomer. But Jaideep had this humility that never let me feel like an outsider. He gave me equal space and respect as an artiste. I think that’s why I was so comfortable to do that scene with him.

Who directed your portion?

My portion was largely directed by Prosit sir. Only one scene, which was the scene with Chaku in the tiny room, was directed by Avinash sir.

What was your reaction when you first watched the series? Why do you think it has resonated with so many people?

This was as much a delight for me as it was for the audience. I only knew what happens in my episode and didn’t know the rest of the details in the story line. I didn’t watch it right away because I was very nervous. I watched a couple of days after its release and I couldn’t believe that I was a part of such a piece of art. Scripts are really the heroes. I think it has resonated with so many people because it shows you the real India.