And Just Like That, the reboot of sex and the city, has its 50-something protagonists ill at ease with their own bodies and ages 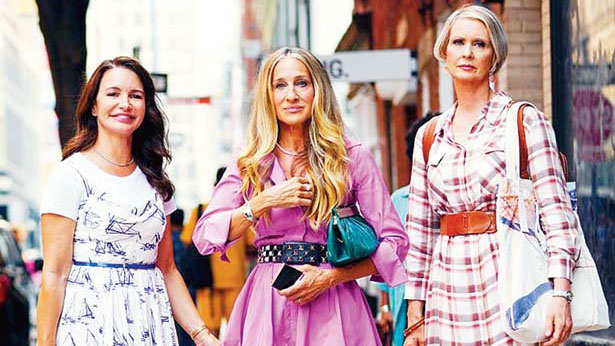 Have you heard? There’s a TV show featuring 50-somethings on HBO, right now. And Just Like That, the reboot of Sex and the City, has resurrected the old gang (Carrie, Miranda and Charlotte — minus Samantha) in present-day New York City, 17 years after the last episode aired. Yes, it turns out that people — even women-people — can actually keep existing beyond the age of 38. Incredible!

Or at least that appears to be the perspective of AJLT, which depicts a world of middle-aged characters suspended in perpetual astonishment and discomfort about everything they encounter, from commonplace political and social phenomena to their own bodies.

“It’s as if its characters must have been asleep for 20 years and awakened utterly gob-smacked to find themselves encountering such things as Black professors, nonbinary children and queer longings,” said Joy Castro, 54, a writer and professor of English and ethnic studies at the University of Nebraska-Lincoln.

TRYING TO BE WOKE
The characters do seem Rip Van Winkle-like, as they stumble upon and blink in amazement at very unsurprising things. “Wow! Instagram? Podcasts?” marvels Miranda at some of Carrie’s latest endeavours, as if these were edgy new enterprises.

Some of the “Van Winkle-iest” moments involve Miranda’s foot-in-mouth disease when interacting with Nya Wallace, the Black professor in her new human rights law graduate programme. Charlotte, too, evinces a weird awkwardness as she cultivates a new friendship with the glamorous Lisa Todd Wexley, a wealthy, stylish Black woman she meets through her daughters’ private school.

“The show now is trying to be woke without succeeding,” said Cheryl Packwood, 60, an attorney and retired diplomat. “I never liked the show to begin with... it was just so white and shallow. It’s not at 55 that you suddenly try so hard to have a Black friend.”

But beyond the external factors of race and politics, the protagonists seem most ill at ease with their own bodies and ages, which they refer to frequently, unnaturally and, often, loudly.
Over brunch, a discussion about Miranda’s decision to go gray devolves into a barbed exchange about the ethics of hair colour. For Miranda, Carrie’s trademark blond highlights pass muster since they are “obvious” — clearly artificial, hence not trying to deceive anyone. But Charlotte’s preference to maintain a more natural brown does not meet Miranda’s ethical standards.

Charlotte is “trying to pass” as younger, says Miranda with disapproval. “There are more important issues in the world than trying to look young,” she scolds. Women do talk about hair and aging, but they generally do not turn salon choices into grounds for moral condemnation over omelette.

Stuck waiting in a long ladies’ room line in a theatre, Miranda blurts out loudly before a crowd: “I’m 55 and I have to pee,” before heading to the (empty) men’s room. Props to her for feeling free enough to step out of the ladies’ room line. But no midlife people I know think about and announce their own ages like this, as if they’d only just learned how old they were.

AGE IS (NOT) A NUMBER
The display of age-shock often feels cheap and a little undignified. In another bathroom scene, Charlotte’s husband, Harry, stands at the commode, urinating for an inordinately long (and loud) interlude. When Charlotte expresses dismay, Harry extols his urological health, invoking his own advanced years: “A lotta men my age can’t pull off a stream like this.” We are further reminded of Harry’s age (and excretory systems) when Charlotte loudly books his colonoscopy appointment over her cellphone — in a cafe, and mentions it several more times later.

It’s true that people over 50 get colonoscopies, and you could even mine this for some meaningful comedy or human drama. But merely name-checking “colonoscopy” as if it were itself a punchline turns it into another item on a laundry list of cliched “middle-aged woes.”

Continuing the potty humour, after Carrie’s hip surgery (which offers occasion for much more “old lady” and “senior citizen” commentary), an extended sequence involves Charlotte awkwardly maneuvering her on and off a hospital toilet and monitoring Carrie’s urine flow.

Rather than illuminate the texture and richness of midlife, AJLT seems intent upon merely pointing at it from a noncomprehending, slightly mocking distance. And for a show that built its reputation on the frank discussion of physical taboos, why is there no mention of the universal challenges of menopause — or its male counterpart, andropause?

One of the highlights of SATC was the characters’ longstanding friendship, their deep bonds and history. This could easily provide a wealth of material for the remake, and at times it does — as in scenes where Miranda lovingly comforts a grief-stricken Carrie.

At other times, though, the peculiar “age-othering” impedes more natural exchanges. When Miranda spots Carrie seated outdoors on the Columbia campus, for example, she calls out: “I see you! You’re the only 55-year-old on the university steps!” — an odd, age-fetishising way to describe your best friend of decades. (Also, universities have plenty of older people.)
When Harry greets Miranda’s husband Steve with “What’s new?” the once-boyish and playful bartender, now sort of blank and inexpressive, can only come up with: “I got hearing aids. I’m an old timer now.” Miranda then helpfully chimes in with specific medical details.

Old friends do not greet each other like this. And while middle-aged men often experience hearing loss, they tend not to announce this fact before saying “hello” or to define themselves with this physical ailment.

Overall, such interactions offer a cartoonish view of middle-age, which pushes it all the way to old age (and a stereotypical view of that as well). “The show depicts 50-something people as if they were actually old already, not middle-aged,” said Jamy Buchanan Madeja, 60, an environmental law practitioner and adjunct professor at Northeastern University School of Law.

The series does try to grapple with the many issues of getting older: loss, death, strained marriages, changing sexual appetites and an unease with new social mores. This aspect of AJLT can be highly relatable: “I do identify with the questioning around what you need from a long-term relationship,” said Jennifer Brinkman, chief of staff to the mayor of Lincoln, Neb. “I myself am going through a divorce at age 50.”

And, she added: “I have definitely experienced awkward moments, like those of Miranda and Charlotte, that reveal how I don’t have the ease of language my children and co-workers have related to our society’s evolving gender and sexuality spectrum. But I want to!”

Yet so much more could be done with this group of older best friends and their beloved hometown. Sex and the City resonated with audiences because, whatever its flaws, it valued and found delectation in women’s adventurous spirit — whether channeled into the thrills of love and sex, friendship, fashion and beauty, or the sheer pleasure of New York City itself. AJLT could easily find age-adapted equivalents of these for the group to enjoy.

There are real benefits that attend this stage of life: enhanced self-confidence; knowing your own mind; the soul-nourishing connection and, yes, uproarious fun and laughter to be found in relationships (with friends, lovers, family) that have deepened with time. Midlife can also be prime years for professional success and achievement.

STAGNATION IN TIME
But in the first several episodes, AJLT shows vanishingly few of these perks, focusing instead on the characters’ decline, confusion and cultural estrangement. And very little seems to remain of any of the group’s careers.

What’s more, for all the focus on growing physically old, the show’s protagonists often behave with curious immaturity. Many viewers have been perplexed, for example, by Carrie’s reaction upon discovering Big slumped over, but still conscious, after his heart attack. Rather than call the paramedics or fetch his medication, Carrie falls to the floor, half-smothering Big with her hair.

As Castro said: “If one finds one’s husband collapsed but still alive, does one not call 911 immediately? Carrie’s behaviour was so baffling to me.” Baffling, and weirdly passive and ineffectual — almost like a child’s. Charlotte, too, seems less than adult, crying so theatrically while helping plan Big’s funeral that Carrie sends her home in a taxi.

“One still hopes, even on television, that women with a certain influence would be playing a more powerful role in their own circumstances. I can’t imagine the same stagnation for men,” said Hollis Robbins, 58, the dean of arts and humanities at Sonoma State University.

Stagnation in time is actually a core problem in AJLT. When Carrie finds herself too upset to stay in her empty home after Big’s death, she decamps to her former apartment, which she leaves the next morning dressed in something likely unearthed in her old closet: a floor-length white tulle tutu. Devotees of SATC will find this skirt familiar — it resembles very closely the one Carrie wore in the original SATC series finale, when Big follows her to Paris to commit to her, finally.

A big, poofy white tutu is the antithesis of widow’s weeds. It visually resituates our heroine back in her glory days. (She wore a shorter white tutu in the original show’s opening credits.) We understand why Carrie might want to wear it now, as a sartorial antidote to the loss of Big. At the same time, though, the tutu looks a bit “off” on her — age-inappropriate and out of fashion. We see people staring at it on the street.

It feels as though the show’s creators are still grasping for ways to develop their now-older characters in believable, interesting ways — to “dress” them appropriately for their time and place. And so, like Carrie in her throwback tutu, they wind up reminding us all too starkly of the passage of time, in an incongruous, off-kilter way.

There is nothing shocking about being over 50, or being any age really, since one has necessarily already passed through all the preceding ages. Aging is just another word for “living,” after all — and we all do it in tiny increments, day by day. If only the characters in AJLT were given the same possibility.