Advertisement
Home / Education / ‘We, the Opposition’ 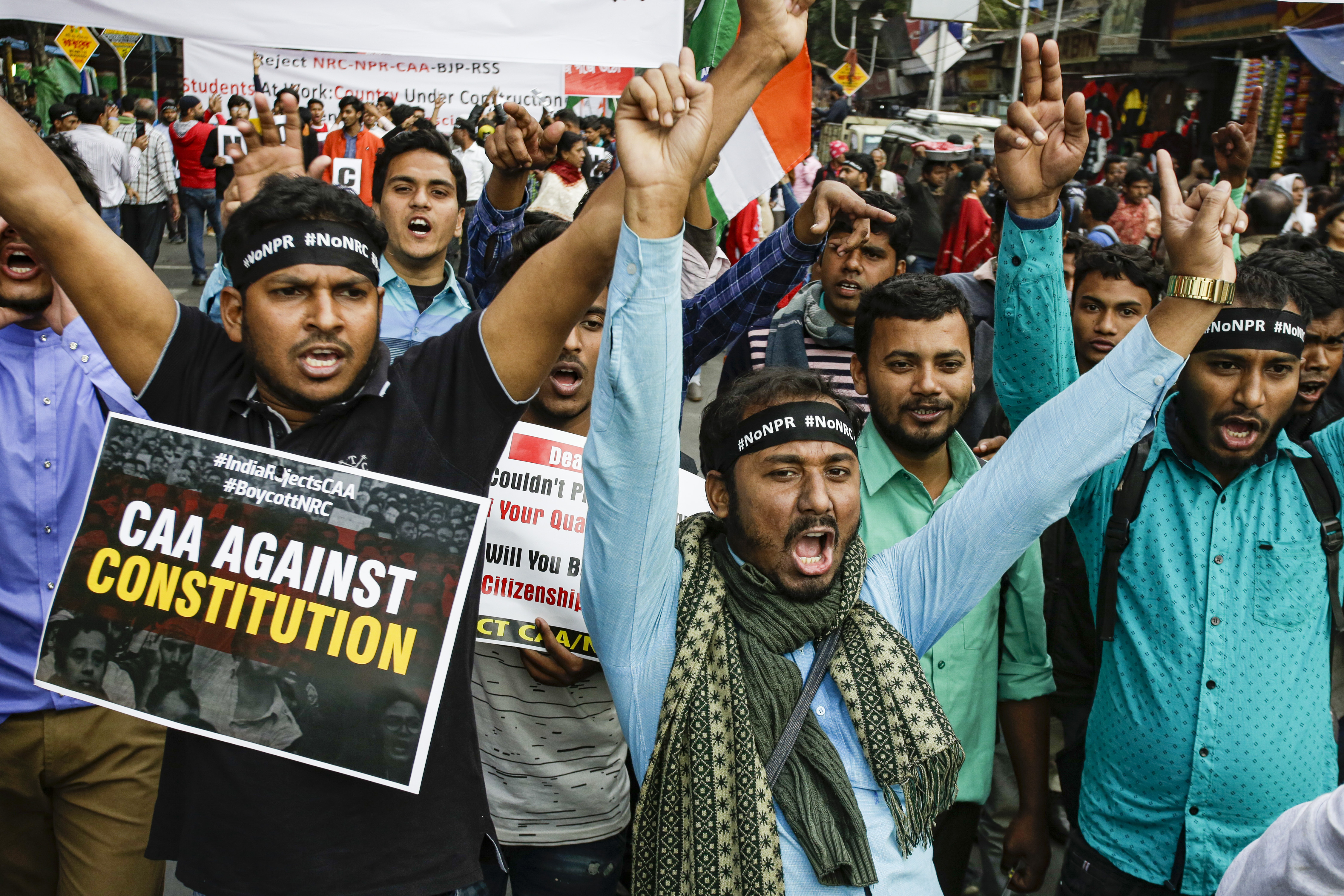 As a student from a lower middle class background, I fear for my career and future seeing the current economic situation and the sheer incompetence with which it is being handled. My university, since the traumatic night of December 15, resembles a militarised zone, with police, RAF and PAC ready to charge as and when they like. A fellow student lost his hand, the ordeal of the student detainees is traumatising — our fear is real, our pain is real. There is not an iota of doubt that our voices are being suppressed, our rights snatched away, our freedoms crushed. It is now incumbent on the student community to resist this oppression. The other narrative that is being repeated is — “But have you read the Act?” This one actually does us a disservice. As students we are the closest to academia and political discourses. We’ve not only “read” it, but understood and analysed it as well and thereafter, we have unanimously rejected it.

I find the CAA not only unconstitutional and discriminatory but also part of a larger project of ethnic cleansing. I have attended almost all the protests across the city because at a time when the fabric of the idea of India is being damaged by the current government on a regular basis, we are left with no choice except to take to the streets. Students are repeatedly being attacked by the state, the government is cutting budgets for education, hiking fees — which undoubtedly affect a large section of students. The brutal attacks carried out in JNU, Jamia, AMU and DU show that the government wants to suppress our voices. The protests from various colleges and universities not only manifest outrage against a particular incident but against the whole fascist system that has to be uprooted. 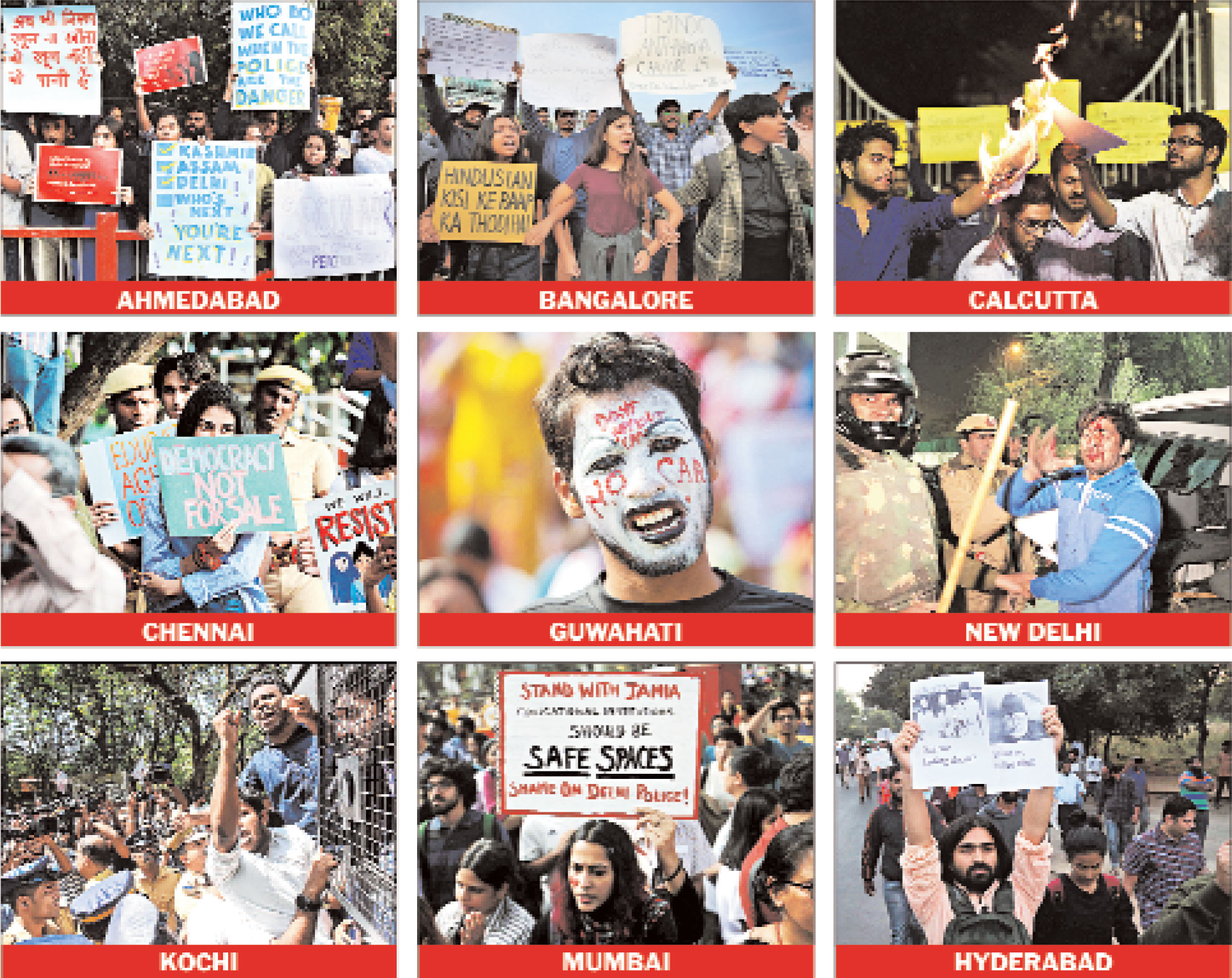 My university is known to be one of the most politically inactive campuses, perhaps due to the absence of a students’ union. When we joined the march from Jamia to Parliament in December, we had no idea it would take the shape of a national movement. I attended all the protests at Jamia till I had to leave the campus. I have grown up in a liberal society but I rarely had Muslim friends. This gap was bridged when I joined Jamia. But for most people who are protesting, they are now

interacting more with Muslims, religious boundaries are blurring and a large section of the country is coming together. This divisive government has inadvertently ended up doing good. People are now waking up to their rights, understanding whom to blame when things go wrong, shifting their ideologies and this change is what I was waiting to see. As a non-Muslim student in Jamia, I was always made to feel at home. It’s now our duty to secure the homes of our Muslim friends and we’ll keep struggling till we achieve it.

Osmania has a strong history of student struggles — Telangana protest, beef festival, CAA-NRC protests. The current student protests are necessary to uproot the fascist regime of the sangh parivar and state-sponsored police terror. At a time when the constitutional rights of citizens are being denied, it is a student’s duty to uphold the dignity of the Constitution and the idea of the Republic of India. Talking about my personal experience, this is not the first time that students are occupying streets and fighting against brahmanical forces. Students roared for justice for the institutional murders of students such as Rohith Vemula, Najeeb Ahmed, Mudassir Kamran and very recently Fathima Latheef. We have been condemning the mob lynching, the witch hunting practices of which I too have been a victim at EFLU, Hyderabad. I was not allowed to enter the EFLU campus because of a Facebook post and had to eventually take admission in Osmania. In any case, this time we, the students, will occupy the streets day and night. Lad liya hamne Masha Allah, aur ladenge Insha Allah.

The ongoing protests across India’s colleges and universities have given new hope to the current political situation in India where we do not have a credible opposition voice. Students are coming out in large numbers and becoming the voice of resistance and opposition which is a very positive sign for democracy. I feel the idea of India that we have read about when in school is now at stake. Students are well-aware of the values and principles in our Constitution, but the current regime is continuously attacking them.

We have seen how Hitler got the Jews killed in Germany when he was in power. We are now facing almost the same situation. They are killing and detaining students, individuals and activists. They are trying to change our history. They are attacking the academic institutions. As students of this country, we have taken to the streets to save the Constitution, to save our fellow citizens.

I joined the protests because the CAA-NRC directly impacted my conscience and the Constitution. Today, this government has targetted a religion, tomorrow it will be a certain caste, day after gender or economic status. Discrimination does not discriminate. An audacious authoritative regime with a brute majority and a weak opposition has compelled students to take up the role of chowkidaars to keep check on the undemocratic whims of this government. The educated student chowkidaars won’t let politicians fulfil their fascist dream of a Hindu rashtra. We just want to go back to our library which they (the police) vandalised and read the Constitution with its secular and democratic nature intact. We want the CAA to be revoked, and the proposed NRC to be dropped. I am not sure if we will be successful, but the involvement of students from all faiths standing up for their fellow citizens has conveyed to the government that they might be Hitler, but this is not Nazi Germany.

As a student of an eminent institution, I support the cause for debate. I too was at Jantar Mantar to voice my protest. Dissent is an important part of political discourse. I believe that the new citizenship laws are in contradiction of the Constitution. The protests are not anti-state but anti-government, and that’s what every Indian citizen needs to realise. We, the students, see it as our duty to protect it, to fight divisive forces and misinformation, to ensure that the idea of India is not desecrated. Our movement seeks to overturn the CAA-NRC nexus, and stop this divide and rule policy. We stand against communal politics and for our fundamental right to free speech and dissent.

The concerns of students joining the protests and taking to the streets is not just for their present but also their future. CAA is a threat to the idea of the nation Gandhi and Ambedkar dreamt of, a threat to the secular fabric of the nation. Today, when the safety of educational spaces is being compromised, students are getting beaten inside their campuses, and their right to protest is being criminalised, it is important for all the student bodies across the country to come out in support and solidarity.

Our Constitution is in danger. It is our primary responsibility to protect it.

Students, teachers and university staff formed a human chain at Ladies Park in Park Circus and staged a protest. We put on black ribbons to condemn police atrocities against the students of Jamia and AMU. We as students have realised that we must remain united. I joined a protest rally at Ramleela Maidan near Moulali, where everyone was shouting azadi slogans. We voted for the Modi government to enrich our economy and generate employment for us, not to divide the country.