You don’t need crores of rupees to study the sky. Just innovation, a miniscule budget and balloons 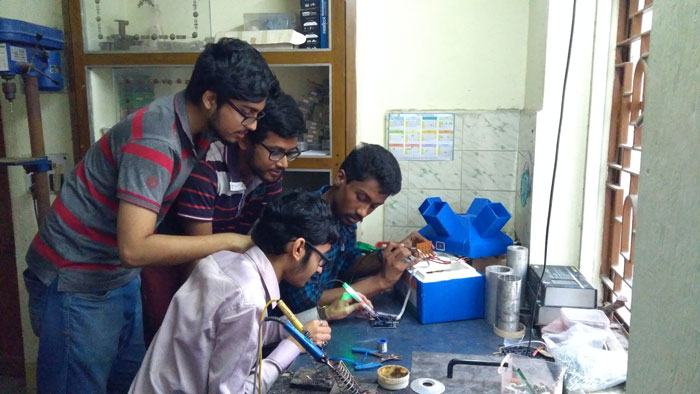 “We have shown that ‘practical space exploration’ is feasible on a minuscule budget,” says Chakrabarti
Sourced by The Telegraph

Amidst the multicrore superstars of Indian science and technology at the ongoing mega science expos in Calcutta, there is no representation from the Indian Centre for Space Physics (ICSP), a small Garia-based research institute. Affiliated to Calcutta University, it carries out advanced research in astronomy, astrophysics and space science. Among other things, the institute has pioneered an innovative and inexpensive way of doing space research using balloon-borne detectors.

Now, it is involving college students in these experiments. “Multibillion dollar projects have been trying to ‘touch’ space using sophisticated instruments ever since Sputnik, the first artificial satellite, was launched in 1957. But how much have we learnt of the universe or far space?” asks Sandip K. Chakrabarti, director of ICSP. “On the contrary, exploring near space can not only give us clues to far space but also help us survive the onslaught of global warming and other atmospheric changes. And these explorations need just a fraction of the investment made in mega space projects,” says the former Nasa scientist.

A single balloon experiment costs about Rs 50,000 and more than 100 such experiments have been carried out by the students of ICSP. “Our balloons can travel up to 42km in space,” says Arjun Dawn, who is doing his masters in physics from Jadavpur University in Calcutta. He has been participating in such experiments since he was an undergraduate at Maharaja Manindra Chandra College (MMCC), Calcutta. “The sophisticated instruments in the payload help us study intergalactic lights, gamma rays and other cosmic rays. It also gathers data on Earth’s magnetic field, solar flare and ozone depletion,” he adds. Usually, satellites worth millions of dollars are used to study these. Worse, at the end of the experiment these payloads just add to the space debris already orbiting around the planet. The equipment sent up with the balloon, on the other hand, is recovered and recycled several times.

“When the balloon reaches a height of about 40km, it bursts,” says Anurup Chakraborty. He along with Arjun, Arnab Das and Shubhankar Majumder started taking part in some ICSP experiments as undergraduate students at MMCC. “The payload first drops and when an attached parachute opens, it floats down to the ground. We use global positioning system to track and recover it, and analyse the data.” Such analyses have helped ICSP find fascinating information about space and publish research papers in peer-reviewed international journals.

Debashis Bhowmick, an engineer at ICSP, often accompanies the students when the balloons are released from rural areas. He says, “Students are thrilled that their floating laboratory is capable of collecting such novel data.” According to him, this gives physics students at undergraduate and graduate levels practical exposure to space science. Since each gram of instrument has to justify its expense, this teaches students how to be innovative and stay within the budget.

“We have shown that ‘practical space exploration’ is feasible on a minuscule budget,” says Chakrabarti. “The crash landing of the Indian lunar rover (Pragyan) recently should serve as a rude awakening to policymakers and focus on cheaper yet more meaningful projects like ours,” he says. Such research will let young students have easy access to space research.

Enriched by practical exposure to space early in their career, it is little wonder that over a dozen of ICSP alumnus are now working with top scientific institutes such as Isro, Nasa and IISc.