On World Press Freedom Day, a look at how Moscow's media has evolved since 1990s: 37 journalists have been murdered in Moscow since Putin took office in 2000 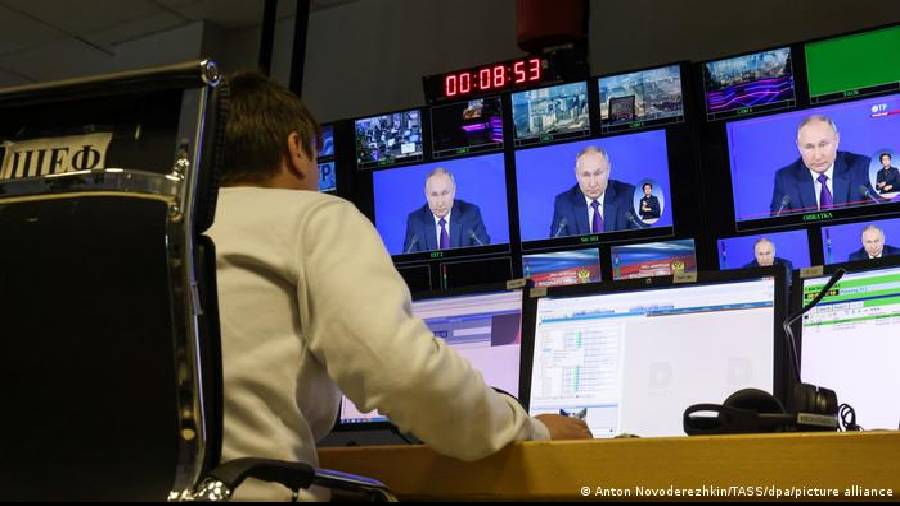 On August 19, 1991, when Soviet television broadcast Tchaikovsky's "Swan Lake" for hours instead of the usual news, citizens quickly concluded something was amiss.

Reactionary forces in the Communist Party of the Soviet Union (CPSU), the army and the KGB were trying to overthrow former Soviet Union president Mikhail Gorbachev. They disliked his reformist policies of "glasnost" (openness) and "perestroika" (transformation) — but the coup failed.

But the media was not always as openly subservient as it is today.

After decades of paternalism by the communist regime, the media were increasingly able to help shape political change as independent actors in the wake of glasnost and perestroika.

"After the end of the Soviet Union, there was an enormous demand among the Russian population for independent reporting. This can be seen, for example, in the fact that many new print media emerged within a very short time. Not only in Moscow and St. Petersburg, but throughout the country," Ulrike Gruska, press officer at Reporters Without Borders, told DW. "The media scene was very lively and reported openly about the end of the Soviet Union, but also about the communist past."

But this "golden age" of a free print media ended rather quickly.

The economic crisis of 1993/1994 forced many newspapers to close. The role of television stations, which were not controlled by the Kremlin but by powerful business bosses, became all the greater.

Oligarchs such as Boris Berezovsky and Vladimir Gusinsky bought the country's leading TV channels, including ORT and NTV. Via their media empires, they steered politics in Russia in the 1990s.

In the 1996 presidential election, for example, the media tycoons helped the democratically minded Boris Yeltsin win against the communist Gennady Zyuganov, thus preventing the old elites from returning to power.

But Gusinsky's and Berezovsky's media groups were not always on the same page politically: While the former increasingly shot against the Kremlin, Berezovsky supported Yeltsin — and later Vladimir Putin. Gusinsky's NTV, on the other hand, openly reported on the brutality of the Chechen war and gained nationwide prestige as a result.

Decline of media landscape since 2000

Berezovsky's pro-Kremlin ORT channel supported Putin in his bid for the presidency and helped him win in 2000.

However, Putin has long since reined in the free press.

"Immediately after taking office, he began to bring the media under state control. The broadcaster NTV was spectacularly crushed. Heavily armed security forces entered the newsroom; part of that was broadcast live. Under various pretexts and charges, the owner Gusinsky was deprived of his power step by step," Gruska explains.

A similar fate befell Putin's one-time benefactor: Berezovsky was not forgiven having increasingly distanced himself from the Kremlin strongman's politics. Berezovsky's ORT station was placed under state control — and today, as the "First Channel," it is the Kremlin's mouthpiece.

With every year, more and more free voices in the country fell silent: After the demonstrations in the winter of 2011/2012 against alleged falsifications in the parliamentary election and after the annexation of Crimea and the outbreak of war in Donbas in 2014, control tightened even more.

And while the state-affiliated channels exclusively propagated the official Kremlin rhetoric, the critical media were denounced as "traitors" and "agents."

On the eve of the 2014 Sochi Olympics, Reporters Without Borders stated that "independent journalism" in the country was a "combat sport."

So, it is not surprising that in a 2017 survey by the Hamburg-based Körber Foundation, 76% of all Russians polled thought the media's job was to support the government in its work and go along with its decisions.

The internet as a loophole?

For a long time, the internet proved to be the only outlet for regime critics, where the media and bloggers could still operate in a reasonably normal manner. "The Russian leadership was late in recognizing the importance of the internet for social discourse," says Ulrike Gruska.

"Compared to other repressive regimes, such as China, where the internet was built as a strictly controlled network from the start, the network in Russia is decentralized. There are quite a few hubs with foreign countries, there are dozens of communication providers through which traffic passes," she explains.

Meanwhile, Moscow has recognized the relevance of the internet and silenced all independent media with a series of legislative changes.

Currently, platforms such as Instagram and Facebook, as well as pages of foreign media houses, can only be accessed via a Virtual Private Network (VPN) access.

The media supervisory authority Roskomnadzor can block platforms at any time, and computers or smartphones must be preloaded with Russian programs by default.

Starting in 2011/2012, the government resorted to even harsher measures. One law after another was passed, making the work of journalists more difficult.

International organizations that are politically active in Russia and receive funding from abroad must register as "foreign agents" with the state registry. Fines and prison sentences are common.

"It is clear that democratic discourse has changed quite fundamentally. The voices critical of the regime are almost all abroad now, and it's not easy to assess how much independent information is still getting into Russia, or more importantly, to what extent it's even being received and believed there," Gruska says.

"I hear this all the time from friends and colleagues: The biggest problem is not getting the information to people in Russia that there is a war going on in Ukraine and that homes are being bombed. The problem is rather that many people, even when they learn this, simply do not believe it because they have been inundated with the content of state television for two decades. Large parts of the population have now adopted the Kremlin's narratives: namely, that there is a Nazi regime in Ukraine from which people need to be liberated."

The editor-in-chief of Mediazona, Sergei Smirnov, was arrested in early February 2021
Deutsche Welle

The events of recent weeks and months have decimated what was left of the free media in Russia.

It started in early 2022 with a major purge in the Russian media world, including the closure of Deutsche Welle's Moscow office and the withdrawal of accreditations for the station's correspondents working in Russia.

After the Russian invasion of Ukraine on February 24, 2022, the last independent media were successively muzzled — even those thought to be protected by their popularity.

Thus, as early as March 1, 2022, the independent radio station "Echo Moskwy" was taken off the air, and the homepage of the station, which was founded in 1990, was also blocked. The outspoken and courageous reporting on the first days of the war of aggression against Ukraine in fact became the station's "swan song."

The much newer TV station "Dozhd" ("TV Rain") did not fare any better. The independent online channel, also founded by journalists in 2010, was the mouthpiece of the young Russian protest generation. "Dozhd" was shut down in early March 2022 "for false reporting on events in Ukraine."

Finally,Novaya Gazeta and its founder and Nobel Prize winner Dmitry Muratov, an icon of Russian and international journalism, were affected.

For years, its editorial staff was one of Russia's best research teams, and its final contribution was radically honest reporting from the destroyed Ukrainian cities.

Are there any independent, free voices left in Russia? There are, "but they can't publish anything," admits Ulrike Gruska. She estimates that, "the vast majority of all independent journalists who have worked at the national level are now abroad." And from there, their voices can hardly be heard in the motherland — power structures with repressive measures and internet blocks make sure of that.

"The situation of the media in Russia today is reminiscent of the darkest and most difficult times of the Soviet Union," says Gruska.