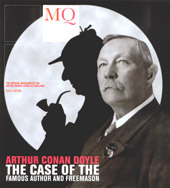 lOn the roll call of famous people who have been Freemasons, one name often included to show Freemasonry is a respectable business is that of Sir Arthur Conan Doyle, the creator of Sherlock Holmes. He was an erratic member, who was initiated into Freemasonry in 1887 at the age of 27 in Phoenix Lodge No. 257 in Southsea, where one of those present was a Dr James Watson. The latter was immortalised in fiction after the two became close friends. Doyle quit his lodge in 1889, rejoined in 1902 and withdrew permanently in 1911.

Although Holmes is not a Freemason himself, he is knowledgable about it. There are references to Freemasonry in A Study in Scarlet, The Musgrave Ritual, The Red Headed League, and in A Scandal in Bohemia, Holmes says to Watson: “There is a wonderful Freemasonry among Horsey men. Join and find out.”